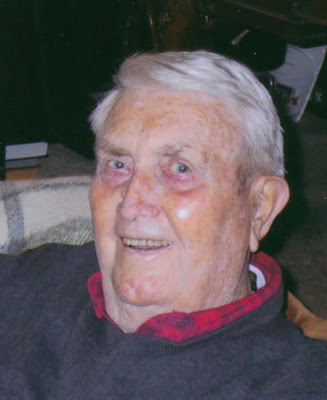 This is my dad around Thanksgiving 2002. He was getting ready to go on a trip to Germany with a friend. He'd gotten over the mental and physical ravages of my mother's hundred days in the hospital earlier that year. After this he would have some other trips, get to meet two additional great grand kids, enjoy events with friends and family, lose scores of friends and family members and suffer a number of physical indignities brought on by time (and occasionally doctors' attempts to reverse it). On Sunday morning I made a welfare call to the house where he was living alone (with assistance with cleaning, cooking, errands, lawn, etc.). This was the one you dread. I found him in his bed where he'd neatly organized himself for the night and where he'd had a heart attack and a stroke. Thirty-six hours later he died. Dad was very much a presence for me, especially the last ten years since he moved to Austin. I cared for his needs the best I could. We had a couple of fun road trips together after my mother died and I retired. He kept his sense of humor until the end. I don't think I could have done.
Posted by Linda Ball at 4:04 AM 4 comments: 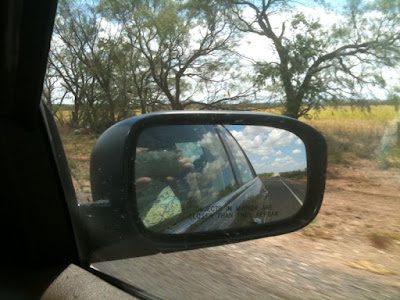 In some ways the road trip we took, lasting a couple of days shy of two weeks and covering about 4500 miles, was essentially pointless. We had only two goals beyond the trip itself: (1) see some friends in Las Vegas and check out a hotel there that we had a free suite in for two nights; and (2) spend some time in the Portland, OR and Oregon coast area with some dear friends as we often do in August. We could have flown to these two destinations, burning three or four days on airplanes. Instead we spent about six and a half days on the road and spent three nights in Vegas and five nights in our Portland area destination.

The idea took hold, though. Once we decided to spend those days in those places and travel between them, I had a couple of long sessions with Internet TrikTiks from AAA, some scouring of hotel WEB sites, some conferring with friends on dates and plans, and the trip was afoot. Or acar, specifically, via our 2007 4 cylinder Honda Accord with new tires and a fresh maintenance run.

Getting away isn't easy these days. We arranged for people to give our elderly parents a hand, but then my dad ended up in the hospital for a couple of days after an antibiotic he was given sent his sodium perilously low. I almost thought we'd have to cancel. But we kept planning. I put together two notebooks, Outbound and Homebound with detailed driving instructions and hotel confirmations. I got new paper maps from AAA. I made lists, lists, lists.

There is something about the road running out under you, transferring you magically across the changing landscapes, listening to books on CD, nibbling road snacks, talking, laughing at what you see that concentrates your attention and gives you some perspective. I am energized most by the reality of people, what they wear, where they live, where they shop; by the signs, trash and animals (dead and alive and just promised by crossing signs) along the way. This is the same detail I find interesting in my walks around my own neighborhood but the details really stack up when you cover thousands of miles of the U.S.

So we do get to go on this lark of a trip. The car is all nicely organized. A bag with hiking boots, hiking socks, jackets and sweatshirts stuffed way in the back of the trunk for the Oregon coast. Small bags to take inside one night stand hotels. A bag with books on CD, an emergency first aid kit and a portfolio of DVDs. A small suitcase with some extra clothes. A laptop and its accouterments in a separate bag. Atop this in the trunk two hanging bags with extra shirts, slacks and a blazer each.

In the back seat, a small soft-sided cooler with a few drinks and a little cheese for first day. Also, two pillows; a canvas sack with plastic utensils, wipes and napkins; a canvas sack with peanut butter crackers, cereal bars, plain almonds, beef jerky; a backpack for each of us with gadgets and books. In the front a slim organizer for maps, directions, hotel confirmations, pens, receipts and two commuter cups full of fresh coffee. We are off around five in the morning. Our goal is to achieve escape velocity west out of Texas on our way to Las Vegas.

Las Cruces, NM is not a garden spot but it was a convenient place to lay over. We did our usual marvel at the 80 MPH speed limts on IH10 in W. Texas and the giant windmills turning ponderously on the bluffs in stretches of nothing. We ate at a restaurant specializing in New Mexican wine. In fact, I think, an actual extension of one or more New Mexican winery. The food and wine were forgettable. Our goal was to sleep and be off in the morning very early to make it all the way to Las Vegas. We had gone 618 miles. We needed to go 742 to get to Las Vegas.

Traveling is so different now than it used to be. Once there was no Internet mapping. No iPhone to pop out to help navigate. In fact, I remember road trips before air conditioning and seat belts. And certainly before cup holders, pay the pump, cell phones, singing shoulders (that rough pavement that wakes you up as you run off the road) and books on CD (or tape). Indeed before CDs and cassette tapes. And certainly before XM radio which the Accord also has. These things have changed travel as have more reliable radial tires. We saw few disabled vehicles.

I thought the car would become disorganized straight away, but the organization held up pretty well for the entire trip. Of course, I moved things around every time we stopped. The cooler only had cold packs when we had a frig with a freezer in the room which we did at most of the small Comfort Inns and such. Trash accumulated and was discarded, drinks were rearranged in the four cup holders in the front.

That second day on the way to Vegas was very scenic. From stately Saguaro cacti to mountains and amazing rock formations and rock-bordered lakes on the Colorado. I've traversed some of this before, of course. But it never gets old for me. I really liked Texas Canyon near Benson, AZ. I'm sure I'd been through there before, but I forgotten the majesty of the giant very rounded rock formations. I actually enjoy seeing the crumpled shells of old abandoned buildings and the various people at the stops. It's a long drive, though, and we arrive in Las Vegas pretty weary. We find the Wynn Encore and valet park, taking most of our stuff inside. We will stay here three nights. There are long check-in lines, but we finally get to a lovely suite. A sitting area, a perfect desk with power and Internet, a flat screen that twirls around between the sitting area and the area with the king-size bed. Lovely bedding, an iPod dock, a giant bathroom with a shower and a tub, two sinks, etc. This is no Comfort Inn.

Lest I devolve into a minute-by-minute (or day-by-day) account where I'm trying to convey some of the moments that make the trip worthwhile, I'll just briefly recap the rest of the trip. Spent three nights in Vegas. Ate several fabulous meals (one lunch with the aforementioned friends) and had lots of good eats and drinks. Slept, shopped, viewed a couple of the fabulous fake environments. Did not risk one cent gambling. Then we drove to Boise, Idaho. And then on to Vancouver, Washington across the Columbia from Portland, Oregon. We had a nice lunch on the Columbia, dinner in Portland and took off around noon the next day with our friends to spend a couple of nights on the Oregon Coast (Cape Meares). Then back to Vancouver. We made our pilgrimage to Powell's City of Books and added a new must-do to Portland shopping: Everyday Music down the street from Powell's. We attended an Oregon wine tasting, had a super fab meal where we got to see a very dear friend I've known since Junior High. Our Portland-area friends made every minute of these three days fantastic by knowing places to go, cooking for us and enjoying music and movies with us. Then we spent three days driving the couple of thousand miles home. I used to keep much more detailed records of the activities and not just in tweets and facebook photo uploads. Start here for such a recount of a 2005 trip. Sometimes I wish I kept the details of my life like that now, but it is just so much work.

Was it worth it? Did we see anything like the Eiffel Tower (real not Vegas one) or even the Grand Canyon (which was, after all, right there in Arizona)? Could it be said to be restful what with going from hotel to hotel and doing all that driving? To those who see the very real problem of making sense of this 'vacation' I can only offer the following bits of narrative and flashes of images which make it all worthwhile for me.
Yeah, I loved our trip. I think it puts me more in touch with the greater U.S. where almost twenty percent of people live in manufactured homes and where some of the clerks ringing up those coffee fill-ups may not stray far from the little town you are going through as fast as you can. I wouldn't want to only do that mindless driving, staying in Quality Inns and Comfort Suites, some of which look like they've fought a battle. But mixed in with fine dining, beautiful scenery, wonderful visits with friends, it worked for me. Missed a small crisis for my dad or, rather, got in on the tail end of it, but the caregivers managed it. So it goes. See you in the rear view mirror.
Posted by Linda Ball at 3:44 PM 4 comments: