The Half Life of Objects 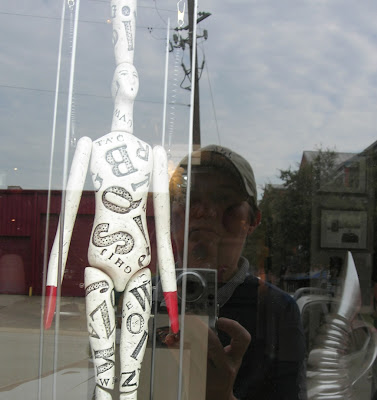 Shot this photo today on West Sixth while taking a long, languorous walk with FFP, my friend Suru and her dog. This store had some interesting objects like this alphabet doll. Some objects d'art and 'stuff' and books made the trip downtown with us, some things we left behind or gave away. Interestingly, my friend SuRu captured a few things from the house that we were leaving behind but which met the aesthetic of her place one floor up. It's neat to see those things working up there that we would have otherwise abandoned.

We think the things we brought, the things we are adding in from shops and the things we plan to acquire will look good. It's amazing to think of all you own, have owned, will own. I once tried to make a list of things I owned. I reviewed this recently, thinking about where that particular list of stuff went. Now that I've reduced a lot of the stuff, I'm taking the time to go back through and sort it and organize it. I'm sure that I've totally forgotten some things or where they went.

It's OK, though. Stuff comes, stuff goes. We come along and then we, too, are gone, taking some of the meaning from our collected stuff.

Perhaps I often sound too materialistic here. But, really, all this angst about possessions is my attempt to rob them of their power. Really.
Posted by Linda Ball at 1:47 PM

During a particularly nasty divorce deposition, the opposing lawyer accused me of not even knowing what was in my house. He asked that I list everything! Big mistake on his part. I have fantastic visualization abilities. In my mind, I put myself in a corner of each room and 'looked' around, 'opened' cabinets, closets, and drawers, and named every darn little thing in existence in that house. About a half hour into it (the deposition was scheduled for a 1.5 hour time block), I had reached my workshop (hehehehe) and I asked if they would like an itemized list of all the parts and tools. They elected to hear the contents in general terms. I absolutely *loved* wasting all that time that they could have used for more questioning!

First I want to thank Forrest for his kind words on my blog. I am proud you want to read my texts. I also want to congratulate him on "Ingenuity Conquers All". The observation is brilliant. It makes one think that this is the age of unpredictability vs. technological exactness, or, in other words, the age of everything!It is uplifting. Then, I wanna let you know, Linda, that this text is brilliant. I don't think you are materialistic. The bridge between spirit and matter exists, for sure. Having just arrived from Brazil, I've been thinking of how primitive religions instinctively turn objects into soul. I witnessed there, a beautiful rite of offering things to the Goddess of the sea, performed on a beach in Rio. On a totally different level, I often muse on Marcel Proust's reaching essence through dwelling on matter itself, that is, through the taste of the "madeleine" he dipped in his tea. And then, on yet another level, on Walt Disney's materializing fantasy. One can discover spirit in matter, or bring it forth, I think.