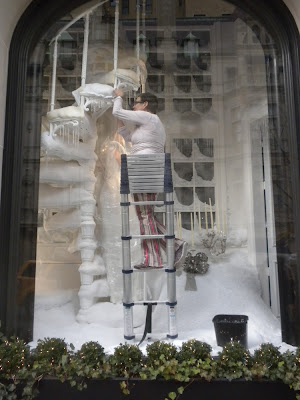 Yes, I'm doing Holidailies. It's been almost forty-eight hours since I posted. Not exactly 'daily.' I thought about it yesterday. I edited this picture yesterday to use it. I thought about writing something last night. But I didn't. Is there a twelve step program for being a blogging laggard?

Of course, it doesn't matter. I can even achieve the badge of honor on Holidailies (the maximum number by your name) by squeezing in some entries that are not quite twenty-four hours apart. (Or that used to work on the old Holidailies.) And, really, the whole thing is an exercise. It's important to go through the motions in life but you can always cheat a little bit, huh?

When we were taking pictures of the holiday windows in NYC, I was surprised to see that this one still had someone touching up the icicles blocking the elegantly-dressed mannequin in the winter wonderland. But things don't always get done on time, do they? Some things are critical, some aren't. In my world, if I get to my agreed on appointments on time, there is always another day to do chores and such, it seems. If you are lucky. There are bills that need to be paid on time and holiday cards will look silly after the 15th of January I suppose. There are consequences. I've sent about twenty cards so far, I think. Trying to at least keep up with returning the favor on the ones I receive.

Certainly work posed many, many more deadlines. When I worked for a living. Over ten years ago.

But. My life is not devoid of deadlines. The most dreaded ones loom: tax deadlines. I hate taxes. I hate paying them, of course. But I also hate the mounds of paper and the incomprehensible forms (even though my CPA figures out what boxes things go in). Congress and the President are currently contemplating unknown changes that will doubtless not only complicate things further, but throw several monkey wrenches in how we planned to fund our retirement. It makes this old lady weary. I believe the uncertainty is, itself, affecting the economy. It certainly affects my spending and giving to charities and plans for the future. All the looming tax deadlines almost spoil the festive holiday feeling. (That and the winter allergy attacks from 'cedar fever' triggered by pollinating mountain juniper.)

But here's a Holidailies entry. There's that done.
Posted by Linda Ball at 8:06 AM