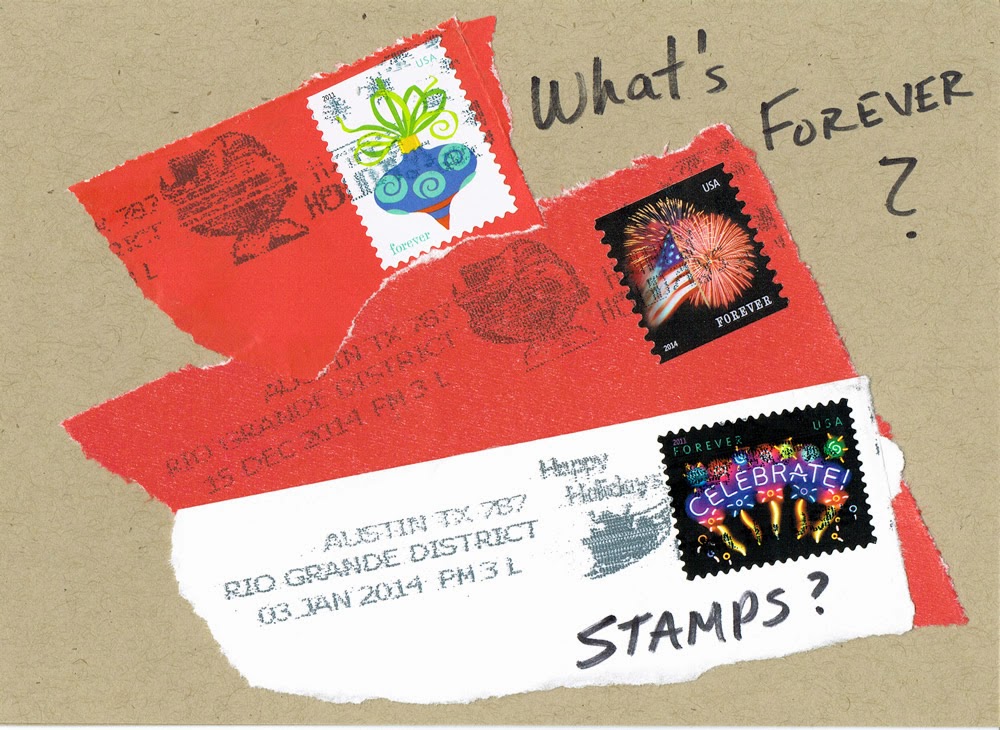 So my 'it seemed clever at the time' idea for this year's holiday card (a habit I can't seem to give up) was this: I wouldn't send cards. I wouldn't think of a clever idea possibly involving a picture of us or reference to our 2014 and then print it on scores of cards and go through the address data base sending out cards into the ether. Instead I had a different idea which I described a earlier this month.

The image above is a scan of the front of a card I actually sent. Inside it said that friends were forever (is that really true?) and maybe that weird shoes were, too, given the recipient. I have sent a few commercial cards and have made cards like this with similar lame collages of stamps. In one case I sent the person last year's card because we didn't exchange cards last year.

It's Christmas Day and I don't have much to do. We opened our gifts to each other last night. We don't have any plans. I only have two cards to reply to...the ones I got yesterday. So, I've kept up with this activity so far.

A few people have remarked that they received the cards and they seemed to like them. I think it forestalled that disconnect of having the cards pass in the mail. Of course, if everyone did this then there would be no cards. We'd all be waiting for someone to send one to get things started. Next year I'm sure I'll print up something I think is clever and mail it to a hundred or so families and then receive and admire the forty or fifty that arrive in our mailbox. Maybe. This year has been pretty fun. It's sort of broken up the feeling that Christmas and its rituals are just this endless unbroken cycle of habit devoid of meaning.
Posted by LB at 8:03 AM