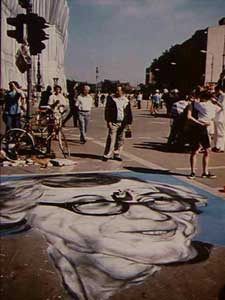 Jeanne-Claude and Christo did a great presentation last night, but the highlight was when they answered questions from the audience. Jeanne-Claude said anybody could do anything if they worked hard enough. The hard part was figuring out what one wanted to do.

At one point Jeanne-Claude said something like this...that there was an article in Sunday's paper and there were beautiful words but it talked about 'volunteers' passing out fabric samples and that was wrong...they pay everyone. Immediately I thought, "Damn. I bet I used the word volunteer here ."And this morning I looked it up and I did. I know better. I know they pay everyone involved. Still...it all seems so much like a labor of love that the people do seem to be volunteers. Indeed, they don't seem to have a needs test (Ann Richards helped with The Gates for Central Park) and a lot of people do it because they want to. Still, I was devastated that I made such a mistake. I could go to the book signing today and apologize in person. But I'm thinking that surely someone else in town made this mistake. The Chronicle comes out on Thursday and is dated Friday. It's just a hippie rag after all. Albeit one that has started one of the biggest music festivals in the world. I don't remember anything in the Sunday Statesman and I couldn't find anything online. So I'm either thrilled (Jeanne-Claude read something I wrote) or humiliated (I wrote something that was wrong and I know better and worse yet Jeanne-Claude herself read it). Or I'm flattering myself and she didn't read what I wrote at all.

Ah, the price of fame! J-C and Christo get misunderstood. They don't just wrap things. No new wrapping projects have been started since the seventies. (Although it took over twenty years to complete the Reichstag wrapping project.) They don't accept sponsorships or 'raise' money. They just sell Christo's original drawings. They don't have volunteers. They pay everyone. They never do the same thing twice nor do they start with anyone else's ideas.

I'm glad I'm not famous. And with my AADD I'm unlikely to become so! And those Chronicles will go to recycling and the WEB content will fade. You don't think Jeanne-Claude will remember my name, do you? Yikes! Nah. It couldn't have been my little blurb that she read.
Posted by Linda Ball at 8:28 AM No comments: 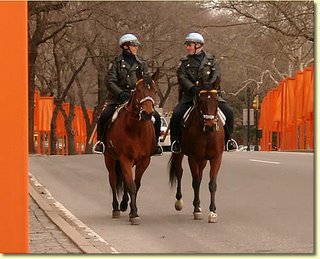 I occasionally have some big idea. Usually about some creative endeavor that I'm going to undertake. But most of my ideas die early. The idea of them entertains me and then I move on, daunted by the difficulty of following through and getting distracted by the next new thing.

Tonight I am going to hear Christo and Jeanne-Claude talk about their proposed Over the River Project for the Arkansas River, State of Colorado and, of course, those people are amazing examples of focus and tenacity as well as creative geniuses.

I'm as unfocused as they are focused. That's why everything I do needs to be completed in a half hour or less. Maybe I was meant to be a blogger!

I always imagine these two of NY's finest are saying:
"I never thought they'd really do this!" 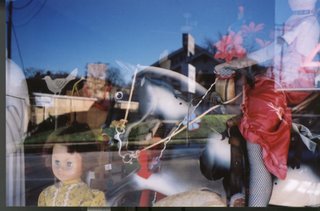 I'm thinking of starting to muse and show photos here instead of just on my site Visible Woman. It does seem to be an easy way to go.

I often try something out because someone else does. I walked across the street a couple of Saturdays ago when my neighbors were having a garage sale. The man of the house somehow started raving about Picassa, the google software for organizing pictures. So, of course, I ended up downloading it and messing about with the results of scanning my drives for pictures. I have a hobby of sorts taking pictures of shop windows. The most interesting things in the pictures aren't always the things on display. I like the idea of the reflections on reflections, the photographer as blob with hair sticking up like a cartoon character. When displayed online, of course, another potential for reflection (pun intended) arises with the LCD or CRT.

Maybe I should start posting from this collection here.
Posted by Linda Ball at 3:03 PM 2 comments: