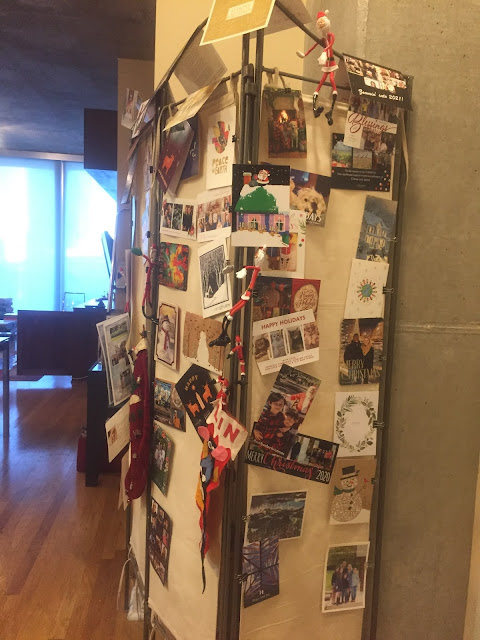 During the holiday season we clipped and hung cards we received (along with our stockings and some Santa bendies) to a screen in our entryway.

I sent around 45 holiday letters and received about the same number of cards and letters from individuals. (We also receive quite a few from non-profits and businesses.) This is down from 150 plus going both directions in some years.

We got two Thanksgiving cards, two or three new year greetings, I think. Many cards were personal creations with pictures of families and pets. Letters recounted the COVID year. Some were just commercial cards with poinsettias, trees, stars, wise men, doves, wreaths, presents, Santas, snow, puppies, kittens, reindeer, snowmen. There was a glittery unicorn and two (2) with glittery Thomas Kinkade painting images. (The painter of light and glitter? Um.) There were personal notes here and there, many involving hopes for meet-ups "after."

Except for one cool reindeer card, the rest are consigned to trash (photos and glitter) or recycling. I save some nice ones in the Christmas decoration box to display in the future. I'll pack up the rest of the decorations soon and the holidays will be officially over giving way to tax season. 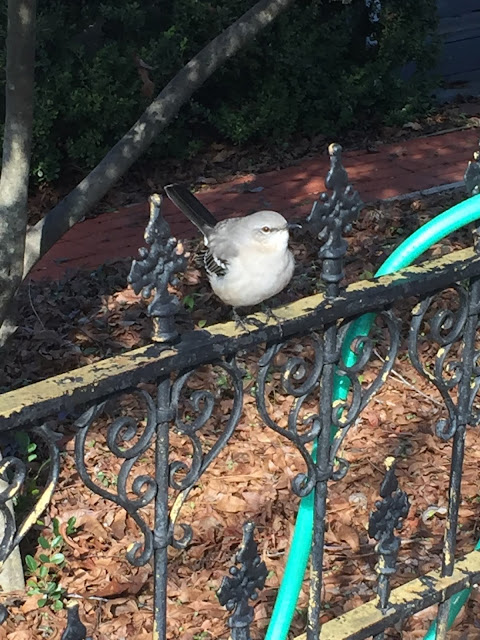 On our walk yesterday this bird posed for me. It was quite close and didn't move while I took first one shot (above) and then another. 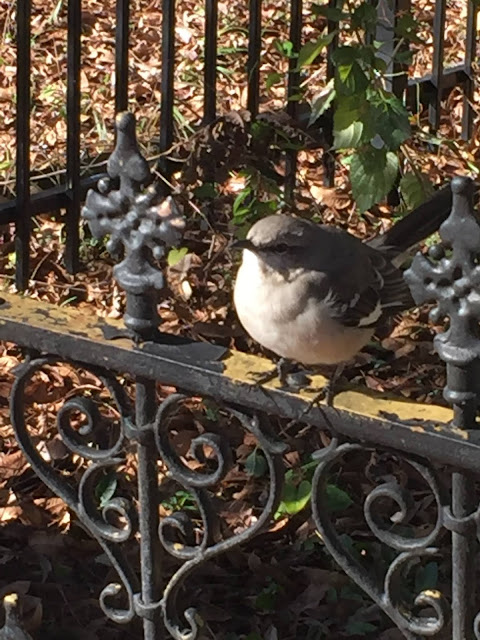 I feel like, right now, that I am posing, too. I'm posing as someone who is not completely unhinged by the chaos of vaccinations in Texas (and elsewhere). I'm posing as someone who really wants to entertain the other homebound oldies with pictures like these on Facebook. I'm posing as someone who can just be thankful that we have enough to eat and comfortable surroundings and plenty of money even though we will possibly never get to go out and dine with a gaggle of friends safely or travel and wander without fear.
It's a pose. Today the mask (not that mask, it was firmly on my face for every second I was outside the apartment) slipped. I was a bit angry at all the know-it-alls even when I shouldn't have been. And I was mad that people much younger than I and in good health were getting randomly vaccinated. I was mad that people older than I am felt comfortable doing international travel. I was mad that it had only been one day since someone in our high rise building was admitted to have tested positive. I was beyond furious at politicians trying to overturn the democratic process and promoting violence. Of course, no one but this blog and my husband saw this slip down the anger tunnel, because we aren't around others that much. Oh, I might have been a little sharp on Facebook in some comments. As one does.
Posted by LB at 5:24 PM No comments: 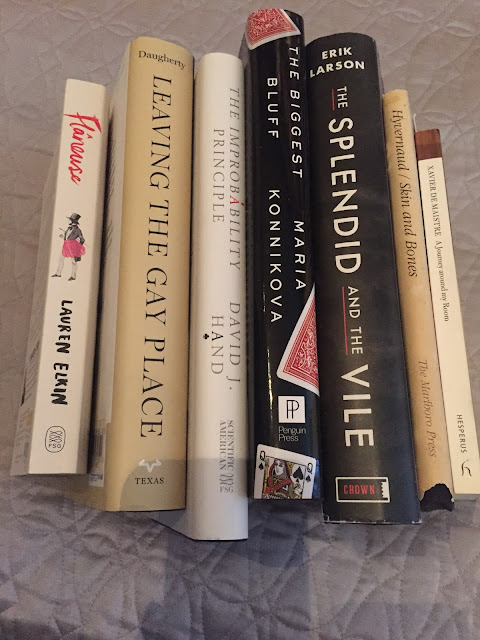 Books I've read during the pandemic shown above. I'm a slow reader. Plus I usually only read books at night in bed before drifting off to sleep. (This usually results in reading all or part of a page or two when I pick it up the next night, too.)

The books I read often lead me to other books. Years ago I read Last Train From Berlin by Howard K. Smith, a book published in 1942 that I borrowed from my in-laws. I found the first-person narrative of the World War II era in Europe so fascinating that I bought and read lots of old books published in the same time frame in the same vein. That slim volume entitled Skin and Bones is one I purchased in January at the Strand bookstore (in NYC) about a French WWII prisoner of war. Erik Larson's The Splendid and the Vile is in the WWII era vein but instead of being published in that era was published this year. However, it was drawn entirely from first-person letters, diaries, and reports and it is an absolutely stunning account of life in England during the blitz.

The other slim volume is a translation from the French of a book published in 1795 wherein a man is confined to his rooms and makes a journey of it. (I bought this long ago. How appropriate to read during the plague!)

The Biggest Bluff and The Improbability Principle are examples of what I like to call 'popular math' books. I love reading them. The former is about poker and the people who play it but also touches on chance and probability. The latter book is about the chances of rare things happening. I was able to use what I learned in formulating my COVID-19 risk spreadsheet. Even if there are only 4500 infected people out of 1.3 million, you have an 8% chance of encountering one in a group of 25. If you encounter 250 then the chance exceeds 50%.

Leaving the Gay Place is a biography of Billy Lee Brammer who wrote the quintessential Texas political novel The Gay Place. It was very interesting to track this infamous character and all the other characters one has heard of through Texas and D.C.

Lastly, the book I just finished Flâneuse is one that really created tangents. Anyone who follows me on Facebook knows that I enjoy walking as a meditation and creative act as well as exercise. This book was both highly personal and off into literary tangents. The author, Lauren Elkin, had her own experiences in Tokyo, Venice, Paris, New York, and London. But she talks at length about other women including ones I'd explored a lot before (Martha Gellhorn, Virginia Woolf) and ones I'd barely been cognizant of before. For example, she explores the French filmmaker Agnès Varda. I'd watched one of her films on the Criterion Channel (Cléo de 5 à 7) but reading about others caused me to subject my husband to a couple more last night and this morning. (He said he enjoyed them.) Odd French films are a great tangent to take one away from pandemic land.

I guess this is goodbye to Holidailies. It's been fun.