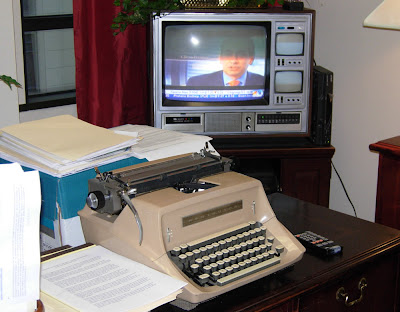 We were dropping something off at a PR guy's office Monday and there, next to his computer, was an old Remington typewriter and a TV with little subordinate TVs built in that reminded me of those pictures of LBJ in the White House watching multiple screens. Once this was sophisticated office technology. We looked forward to having such things. (Well maybe we would have been pining for an IBM Selectric type ball electric typewriter.) I remember longing to have...an electronic calculator! Yes, I was of the slide rule generation.

At least, back in the day, I was looking forward. I don't find I do that much any more. Not that I live in the past. Not at all. I'm locked firmly in the present.

It's a present where you could be seduced by dreams of one sort or the other, but quickly slide back to the reality of physical decline (yours and other people's) and limited expectations. Being firmly retired (seven years) and barely into my sixties and living as comfortably as we are? Beyond my wildest expectations but not beyond my dreams. I dreamed of fortunes to lavish things on myself and, especially, others---friends and charities.

If only you felt that you were going to stay healthy and wealthy enough to have the imagined gadgets and adventures and didn't feel that there are many things you'll never do or have. The fact that you don't even want some of the things, that's good. But the feeling of limitation isn't always pleasant.

In 2001, after 9/11 I started working on a list of things "I'd never care to do" and things "I one day (still) hope to do or do again." Among the 'nevers?' Ride a motorcycle. Among the "hope to dos?" Travel to every country where women are not subjugated. It seems like a list I ought to work on some more. I'll look forward to that.
Posted by Linda Ball at 9:35 AM No comments: 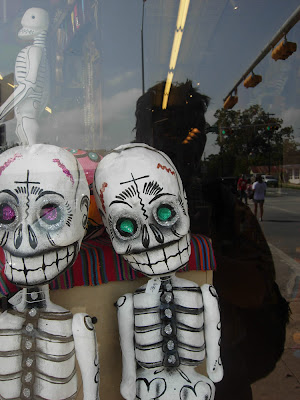 Some people like scary movies. They like being scared? That's what they say. I've finally learned to watch scary movies by disassociating. It's a movie. It isn't happening. It's easier with fanciful big monsters crushing toy cars and trains. I used to hate 'scary music.' You know, the stuff they play to heighten the scenes when you want to yell at an actor to not open a door or go off alone or some such. FFP would watch something on TV and it would have scary music and I'd yell my disgust from the other room.

I am not scared of death. Not mine, not anyone's. The fact of it, that each of us 'owes one' suits me. No. I know one day a bus will come my way or there will be some other accident or, more likely, now that I've made it through all these decades, one or more organs will quit doing their work.

Not afraid to die. Know that the choices for friends and relatives are stark, too: mourn me or I mourn you.

But, really, everything leading up to that state is scary. The world is a frightening place. Sure I feel safe just now in my condo. More or less. Lots of people are looking over their shoulders every moment. But I know things are stalking me and my family. Disease and decline.

Every day we read about wars and financial crises and hate crimes and running out of health insurance. Bad things happen to people we know and people far away.

Who needs Halloween to get scared? 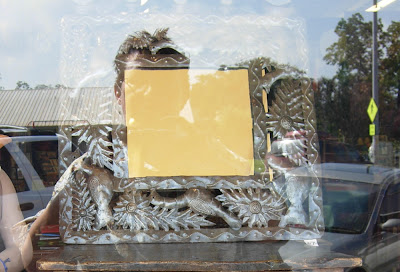 Yesterday was the twentieth anniversary of the Loma Prieta earthquake in Northern California. I happened to notice a news story today in my news feed (I probably subscribe to too many feeds because I'm always behind...just like the newspapers). Anyway, this is the earthquake that collapsed a double-deck portion of a freeway in Oakland. I was nowhere near the earthquake. I was, in fact, about 6000 miles away in the south part of France. Nevertheless, I remember it well. I walked from a little country inn perched near Mougins Village in France to the village to buy newspapers. Both the International Herald Tribune (in English) and the French paper had huge headlines about the earthquake. My friends and I crowded into a public lounge at the inn (the only place with a TV) and watched coverage. We were frustrated when they cut off the voice of someone they were interviewing to dub in the French translation. I read the French newspaper (with the aid of my pocket electronic translator) and they described the freeway scene with the collapsed deck on the cars below as 'coffins of concrete.'

Thinking back to that time twenty years ago, made me realize how we connect to big events and disasters based on where we are and what we are doing...even if it's far away from the site.

I finished listening to cassettes in my car about British Kings and Queens. I still can't remember all the Georges and all the hanky-panky and wars. But, of course, I remember when Princess Di was killed. I was home for that one and I think FFP woke me up to tell me the news. A short time later I was in Paris and there was a memorial near the underpass where the wreck occurred.

We all remember where we were when Kennedy was assassinated (if we were alive). I was in History class.

In 1981 we had a big flood in Austin. Thirteen people died in and around Shoal Creek. I remember the party in the unfinished penthouse of a bank building on 15th Street, watching the storm develop. And leaving early because we were in black tie and sunburned and uncomfortable and, after we got home and changed, deciding not to go out again because it was raining so hard. And waking the next morning incredulous at the destruction and amazed at the debris line in our backyard.

I don't remember when I first heard about August 1, 1966, the day Charles Whitman mounted the UT tower to bring down people with a high-powered rifle. I was in Sacramento, California on a trip with my sister. So I wasn't even in Texas. Little did I know how close Whitman came to changing my future, though, gunning down someone a few scant feet from my future husband, someone I didn't even know at the time.

I think the message is this: if there is going to be a disaster, you should be close to me. I'll be far away or, at least, oblivious and safe. But we always remember a lot about the time, don't we? And where we were.
Posted by Linda Ball at 3:24 PM No comments:

Stories We Tell Ourselves 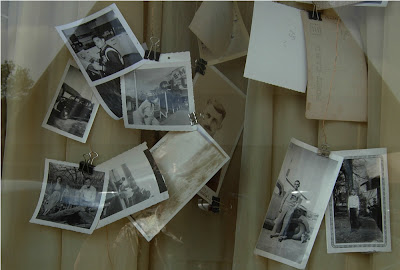 We only deal in narrative, really. Oh, we think we are about emotions and feelings and such: love, hate, sadness, desire, curiosity, learning, meditating. But we can only think about these things, it seems, in the context of the stories we tell about ourselves and others, about places we moved through and things we've touched and seen and events we attended.

Today's picture is a shop window reflection at Uncommon Objects on South Congress. I've always been curious about the photos for sale in shops like this. Important enough to take and develop in that era before digital cameras and yet somehow leaving a family and its narrative and ending up in a bin for sale by an antique dealer. I've even bought a few in the past, thinking I'd just invent a narrative to go with it. Of course, inventing stories, fiction I think it's called, is something I've always had problems with because of the whole 'making it all up' part.

I've been taking a writing class ("Writing Your Life As A Woman" conducted by Dean Lofton) and what I notice in this class (which is focused on just getting the writing out and seeing where it goes, writing from prompts about real things in your life) is that no one just writes "I am happy" or "I was sad" or "I felt lost." Instead, they tell what they were doing constructing that emotion with details. Sometimes the listeners can't even tell that the scenes in the narrative create the emotion but suddenly there are tears from the reader.

I have my stock stories and the other day I was telling one of them and I started to wonder about some of the details. And then I realized that the detail didn't really matter as much as the reason why I hung on to that particular narrative. There was something I wanted to convey about my life in this world and the story was key to it. The story was neither fact nor fiction. It had an element of truth but the retelling made it important.

I frequently talk about the class I took before that was similar to the one Dean is conducting. I talk about how I enjoyed scribbling to writing prompts, reading and listening to others read and following up with writing 'sessions' with a friend. I tell about the hundreds of scraps of paper and dozens of notebooks of all sizes and shapes that I filled up with scribbles and notes and lists and have trouble tossing. (I'd done this for years before that class and have for years after.) I tell that because I want people to understand that I trust writing as therapy and a path to emotion. I sometimes mention that I didn't particularly care for that other instructor.

When I review those old writings, I sometimes say I'm sad or happy or excited. And that's the dullest thing in the world to read. But sometimes I read about the exact exercises I did, what I weighed, what I ate, what errands I did, where I went shopping and what I bought. I find a word I encountered written down, maybe with the definition, maybe not. I tell people I love words, but I tell them with stories. About trying to 'read' the dictionary. And about how when I was programming I'd be writing something and have to look up a word for some reason. (This was back before spell check, online dictionaries, etc.) And I would actually think: "That's the most fun I had all day long." It tells you something beyond "I love words."

Sometimes, though, we tell ourselves a story about a time in our lives that is not really false exactly but just wrong. If we wrote something down during that time, we might edit that story and make it a little more true to ourselves. Today I read some journal entries (actually a wad of yellow legal pad paper written on one side) from 1985. I remember at the time being sort of a lazy goof. Writing a journal when I should have been working. Stuff like that. But reading about the code I wrote and the thought I put into it and the things I was doing outside work and the thought that was going into my diet and exercise, I thought "Hmmm...maybe I had it together a little bit and had some good ideas. Maybe the fact that no product emerged to take the PC-DOS world by storm was not completely, entirely my fault." And yet, it's just a narrative either way. A way of putting the emotions of that time, and before, and since into a frame that I can relate to and that others can as well.

[Note: I'm determined to hit 'Publish' on this even though it doesn't seem to say much. The reason is that there are four unpublished drafts in Visible Woman before this one. The titles are: Free Ideas, People You Know, Ups and Downs and Exceedingly Random. They have semi-clever pictures attached. They languish. My three readers are disappointed. Just must publish something.]
Posted by Linda Ball at 1:05 PM No comments: