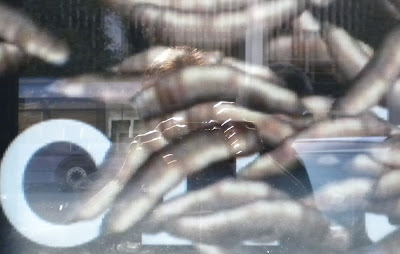 A couple of weeks ago I went to a local Austin event that is part of a larger international movement. Called Pecha Kucha it's a gathering of creative types with presentations by people in various disciplines that consist of twenty slides which are presented for only twenty seconds each while the creator of the show speaks. I found the presentations intriguing, but I was by myself and I bumped into another woman I'd recently gotten to know, Elizabeth Neeld, who was also husband-less. We chatted before the event and at the break and it reminded me how intriguing I found her. That interaction and putting a face and voice to a person whose blog and twitter feed I follow turned out to be the best things about the event.

When I got home, I went to Elizabeth's WEB site. I discovered a blog entry that intrigued me and since then I've been trying to reconcile the interesting concepts she addressed with some things I feel deeply about personally and that are somewhat contradictory to these ideas or maybe simply a flip side notion.

Her entry cites some research that initially sounds very compelling that asserts that novelty gives our brains pleasure.

I immediately thought that it made sense. People are constantly telling themselves that they should seek the new. "Let's go somewhere different on vacation this year." "We always eat there...let's go someplace new." "Maybe we need some time apart and to see new people." People change their environs, their jobs, their residences, their companions, their lives. And are often invigorated by it. Sometimes they just go see a new movie or museum show or listen to some new music. In Elizabeth's piece she quizzed people about things they'd done to push their novelty pleasure centers and it seemed to be a concept that worked.

And yet. As compelling as that logic seems, as jazzed as we often get to do something different, aren't we really addicted to the familiar and comfortable? The blog entry Elizabeth wrote references research that shows that when confronted with something new "the brain lights up in a way that results in a positive experience for that individual."

Interesting because synonyms I find for nostalgia are 'fond memories' and 'yearning.'

Do we want to be comfortable and on familiar ground and yet seek something new? Is this dichotomy part of our fundamental failing as humans or our gift?

I consider myself a shy person. New situations do excite me but they also create anxiety. I often prefer to settle into a comfortable familiar routine. I love the idea of meeting new people and learning about them but I feel a physical internal resistance when actually seeking these experiences. I love exploring new places but it also creates anxiety. I read some research years ago that showed that babies who were sensitive to environmental changes like light levels would turn out, statistically, to be shy children who resisted meeting and interacting with new playmates.

Do we all contain a desire for the new, for novelty, and yet a sensitivity to change?

Nostalgia may not be the right word. Routine might be a better choice. I chose nostalgia because 'novelty and nostalgia' is alliterative. And the brain loves alliteration, the repetition of the first letter of the two words. Why? Shouldn't be brain like the novelty of a different sound? Why do we like rhyming, repetition of melody. Why does an old familiar song light up our brains in a 'pleasurable way.'

I wonder if this push and pull between novelty and the familiar is why I love found object sculpture and collage. Something entirely new from something we recognize. And maybe that's why I like to shoot reflection pictures. Finding something new even in the familiar and easily available.

There is probably something the marketeers can use in this line of thought. Some way to get us to buy things that are novel and yet known. It argues for movie sequels, movies with big stars and yet a yearning on our part for something entirely new. I'm off to an Oscar party where both the novel and the nostalgic will be fully celebrated for their ability to light up our brains with their projections.

So give it some thought, readers. Newness or comfort? Branching out or well-worn trails?

[Today's photo is of a window of what I think is a computer security firm on Congress which has a video projection of worms getting wiped away. Some of the worms are, of course, my fingers on the camera.]
Posted by Linda Ball at 3:28 PM No comments: