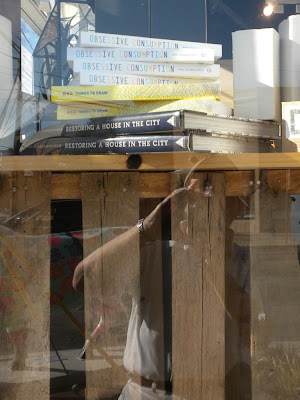 One of my ongoing agonies is a lack of an accurate record of where I've been, what I've done, how far I've walked and what I ate. A blog is one way to keep up with stuff like that. I haven't posted here since May. So, yeah, that's not working. Oh I've tweeted. Posted pictures of Austin daily. And perhaps scribbled in a notebook or private little logging app. But my life and my history and the history of our time here is essentially getting lost faster than I care to ponder. Not that my life that important. No, it's really not.

But as the anniversary of 9/11 approaches you wonder what you were thinking then. In ten years, I might wonder what I was doing as Texas tried to burn down around me.

I used to organize a daily journal. Online. And I spent considerable time scribbling in notebooks. Notebooks I still have somewhere or have transcribed into (probably lost) files on the computer.

Given all the disasters that abound these days and my good luck (so far) at dodging them, it is interesting what I wrote on 9/13/2001:

Either the molds or the cumulative feeling of helplessness, is making me sick. I take some Dimetapp, drink Sleepy Time Tea and eschew alcohol and caffeine and try to get a good night's sleep. I'm such a wimp. What if something had actually happened to me?

I'm happy to be able to look at my situation and see how lucky I really am. That nothing really significant has touched me. My planes stayed in the air, the 1981 flood didn't reach the house and when I've stumbled on paths near precipices I've been spared the short acceleration to the rocks at the bottom.

But the memory thing. Where was I with that?

What sparks memory anyway? Why do I forget what happened in a tennis game just seconds before and then suddenly say "oh, yeah, passed down the line" or "sailed my overhead volley out." Or never remember at all. Why do pictures evoke an experience for us, even come to represent it totally? Why is everything happening so fast that we can't really record it? Does it help or hurt that all our social media contacts are out there connecting us to people, places, events and ideas we can't embrace ourselves?

I started thinking about writing this ramble one day when I was thinking about things I saw on the hike and bike trail. I heard these two guys talking. One said something like "Do your kids spend a lot of time at your house?" I was going to write it down or tweet it later and then I thought: were they running or riding bikes? Weird. Absent that detail from memory it stopped me in my tracks. On subsequent trail walks, I tried to remember a few encounters more accurately. But still they were missing pieces. Today I saw a pair of small poodles. But I don't remember who was running with them. I saw the Indian chief (a bronzed, bare-chested guy with his gray hair in braids) but I couldn't tell you what kind of shorts he wore. I saw an Old English sheepdog but don't remember the person with him (or was it a she dog?). I do think the owner was female. I heard a guy say into his phone: "Do you know how valuable that is?" It was a man, looked like a businessman, tall. But I don't remember much else about hin. Things are remembered but many more things are lost.

In yesterday's NY Times Science Times there was an article on the development of the memory process. It shows that children develop memories but have trouble retrieving the source of the memory. I empathized with the children in this test. I know I saw something, but when??? Maybe this is why I can't play Bridge well. You have to remember the bidding, the hand being played. It's a blur for me with all the other hands, other times. Maybe I have a child brain. I wonder if I can develop a way to remember things in a better way in my twilight years?

Clearly, it's not possible to make an adequate record of things external to oneself and use that as a crutch. Sure I saved some info from 9/11/2001 but by that very act it almost becomes everything I remember.

I cadged the title for today's piece from a memoir collection by Vladimir Nabokov. And I will use a quote from him to address my final worry about memory and its incompleteness and usefulness. I worry that if I use real things in fiction (which I, of course, never write or at least never complete) that it will rob the thing of some truthfulness. Here's my parting quote:

I have often noticed that after I had bestowed on the characters of my novels some treasured item of my past, it would pine away in the artificial world where I had so abruptly placed it. Although it lingered on in my mind, its personal warmth, its retrospective appeal had gone and, presently, it became more closely identified with my novel than with my former self, where it had seemed to be so safe from the intrusion of the artist.

And so it goes. Another reason not to write 'my' fiction: I would lose even more of my real past!

We may discuss this memory thing, further, lads and lasses, but I've decided to hit publish. Shocking, I know. Perhaps it will not be another three months.
Posted by Linda Ball at 6:41 PM No comments: