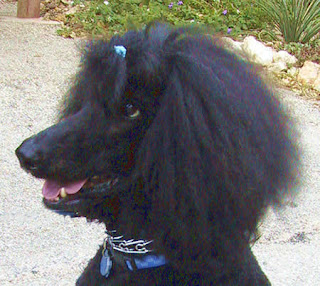 I called Zoey my god dog because I knew her all her life and her mom (owner) and I went on many adventures with my last dog, Chalow. When she was still a small pup with big feet, not yet grown into the regal yet goofy standard poodle she would become, she would plop down on her hindquarters during walks and look at us as if to say 'what are we doing?' Once she discovered squirrels and her legs grew out she pranced along, sometimes starting up every sidewalk or drive. She could jump up very high from a standing start and the huntress she felt she was tested the collar and lead when something would move in the bushes. The happy picture above is from 2002 with one of the many hairdos she sported over the years.

Here's her obituary from my friend:

As most of you know about a year ago Zoey was diagnosed with cancer. For the last year she has been taking an anti-cancer drug and Prednisone and has been doing fair. Over the past couple of weeks her back legs have been slipping out from under her more and more. Often I would actually have to lift her back up because she couldn't get traction on the hardwood floor. Sometimes she would shiver even when it wasn't cold which is a sign a dog might be in pain. She made valiant efforts to hide her weakening condition but several times I let her outside and would notice her just standing in the yard, not looking around, just standing.

Recently it was so obvious that she was in decline that I finally decided to let her go. This past Tuesday, September 4, 2012, around 12:35pm I sat by her side while the vet gave her sedatives and she passed gently on. Zoey was born on January 13, 1998 so she was 14 years 7 months and 22 days old which is a pretty good run for a big dog.

About 2 months ago I knew we were approaching the end because I opened the door to let her out and 5 feet in front of her was a squirrel on the ground. In her youth Zoey would leap off the top of 6 steps, pompomed tail in the air, running full blast across the yard trying to catch a squirrel 50 feet away and already half way up a tree. This time she leaned forward for a moment and I thought she were going to take off once more; but she stopped as if finally accepting that she wasn't going to catch this one either. She couldn't muster that last burst of energy to fly off the step and try for the 100th time in vain to catch a squirrel, so it was clear her joy of life had changed. In life she never succeeded, but I know all dogs go to heaven which is full of squirrels; and I hear they actually catch 'em.

Rest in peace, Zoey Ray of Sunshine, Pedigreed Black Standard Poodle born in Gholson, Texas; one of a litter of 13 adopted at the age of 8 weeks old. Living life at full throttle for almost 15 years.

Posted by Linda Ball at 8:07 AM No comments: