The Importance of Strangers

We are dependent, as social animals, on other people. Most of us crave interaction with people we know: doing activities, talking, eating, participating in cultural events and talking about them. We like to be able to predict what others will do. We like knowing that one friend will always be late, one will always order then change the order. We like the predictability of our friends' wardrobes and personal ticks.

But we also crave being around strangers or people we barely know. We like watching them interact. We like sorting them into types in our head, but having the slight frisson of seeing that they are wearing something slightly odd or ordering something weird or behaving in a way we couldn't have predicted.

I have thought of this more and more as I've gotten older. How pleasurable it is to be around people without any high duty to interact with them. (I'm actually shy with strangers so not needing to interact much is key.) Over the years, before I married and after I married during travel without my husband I spent many an hour sitting alone in a cafe or restaurant, in a park, on a bus or train. Just watching others. Delighted by their endless variety and yet their capacity for fitting expectations.

The other day we took a walk and on South Congress we stopped in the venerable junk mall that is Uncommon Objects. A lot of the 'booths' (really just areas rented to dealers) have old photos for sale and I always flip through them. I don't know what I'm looking for but maybe it's 'interesting strangers of the past.' I'm also intrigued with how the photos came to be a commodity and left the possession of the people who had emotional attachment to them.

I bought three such photos yesterday.

wo photos were of three young women enjoying some good times together. The one to the left is labeled on the back (see right): "Helen Kay &

I Sept 20-44 our picnic by the tennis courts" (Click on images to enlarge.) We don't know who is shooting the picture or where they might be. A country club, I'm guessing. The war is still on in Europe and Japan. Was this photo sent to a soldier or sailor so he could think of happier times when he was near his wife/girlfriend/sister and had access to HiHo crackers and other goodies. And a park or club? Or maybe a Schlitz beer. (See below.) The second picture seems definitely to be a country club or maybe some armed forces base club somewhere. There are more strangers in this picture. Maybe the gentlemen and lady are even strangers to the three women. The back simply has on it: "Kay Helen Me." They are enjoying their Schlitz (and Helen has champagne assuming she's in the middle) and they might have enjoyed a swim. What are these people thinking? And...where are they now? They were, what, twenty-somethings in 1944? So they might be ninety or so if still alive. Maybe the I/Me person had these pictures and she died and they ended up in

the bin at Uncommon Objects. Wouldn't it be strange if someone saw this on the Internet and recognized one of these people? That probably won't happen. They will just be these unknown people. Predictable for their era and yet a bit unknown.

As I said, when these pictures were taken, there was still a war raging in Europe and the Pacific. The third picture I plucked from that bin was taken on a ship. Maybe in that WWII era. Four sailors pose somewhere on a ship. 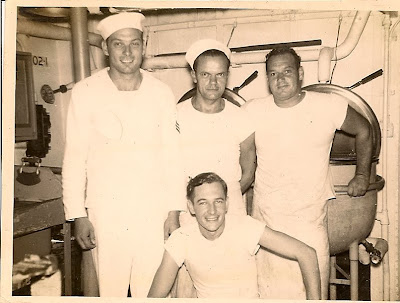 On the back is written, simply: 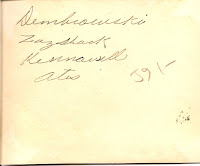 At least I think that's what it says. Here's an image. That last name might be Otis?

Was this picture sent home to the gals above? What happened to these guys? Where were they from? They are like strangers you pass on the street and never see again. One of many. Sorted into categories. Who went on, maybe died in the war or much later. Who maybe sit somewhere, capacity felled by age.

Posted by Linda Ball at 3:50 PM No comments: