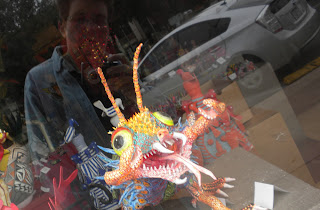 Whoa! I was just looking at Holidailies and wait, wait...am I supposed to post 32 times??

I'm such a rule follower. I feel compelled to post with another 'stolen' shop window reflection image and tell you that I ate like a queen last night. (And drank like one, too.)

For NYE we got dressed up a little after eight, walked a few blocks, and went to a secluded romantic dining room. (Jezebel, tucked away inside the Bar Mirabeau on Sixth Street.) After eating and drinking some great adult beverages, we walked back to the apartment in the rain. Rain! We needed it. We had our umbrellas. Young people stood in lines to get in various venues, most without umbrellas. Safely home, we dosed through midnight and I was rudely awakened by someone setting off (illegally) fireworks nearby later.

Yesterday was a day of feeling closed in by life's circumstances. News of a cousin's husband's death reached me. The phone discussions with other relatives brought other tales of time catching up to all. I worked through some of the end of year and end of quarter and end of month duties including getting two forms with checks ready to mail to the IRS. I worked on other preparation for tax time as did Forrest. There is a feeling with me on New Year's Eve not of a new start the next day but of having run out of time in the year.

Today we stayed abed rather late. Although holidays are not that different than other days for us since we retired we sometimes adopt the attitude of the rest of the world and sleep in a bit and lounge around in our sweats until noon. (OK, we do this on workdays occasionally, too.) I ate so much last night I thought I'd never eat again but I did indeed, consuming a bowl of black-eyed peas and some cheese and crackers.

We watched part of the Rose Bowl Parade. I worked the NY Times puzzles. The crossword was in honor of the Emancipation Proclamation but also managed to include the word 'dementia' which struck me as funny because every time I complete a puzzle I'm doing a little brain dance to prove that I haven't succumbed to it.

We were invited to an open house last night which we didn't make because of some of the above phone calls and the dismal weather and the fact that we'd have to drive there (but could walk to dinner later). We were invited to one today, too, and we made this one, toting a bottle of wine for the party-giver.

It was an Open House and we were on the early end of it. We talked and got a got tour of the guy's place in another downtown condo building. We'd never been in these, and enjoyed another perspective. He had all kinds of food that he was pulling out: shrimp in cocktail sauce, sausage balls, cheese, ham, black-eyed pea salad and cornbread. A few more people came. When we finally left I'd had a tour of the art on the walls, we'd had a lot of linking discussions. I'd eaten too much and had a little wine. We walked to Book People which was crowded with people taking advantage of their big 20% off sale. But we didn't buy anything. Too many books at home that need reading. I'm still reading the one I got for Christmas and I'm still reading a book I bought in Sag Harbor in the summer. (I've been reading it by the bedside, a few pages at a time.) There are piles more I need to read.

So we are home getting ready for an evening in front of the TV. Drinking coffee. Watching DVDs instead of football. I haven't done anything real useful today. But. It's a holiday.

So, now...this is really the end of Holidailies, right? Bye for now.
Posted by Linda Ball at 5:11 PM No comments: