You're In Good Hands 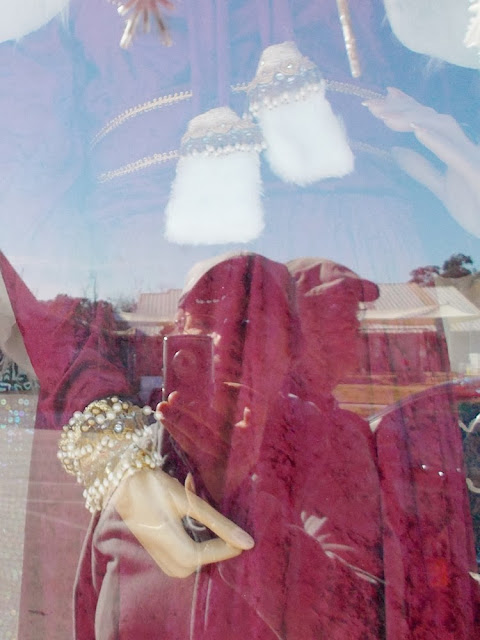 Shop Window Reflection of Us with Mrs. Claus costume at Lucy in Disguise on SoCo.

Holidailies are over for 2013. So I don't have to write here and, if I do, there are no rules imposed by the portal or myself to follow. (What was with that The Visible Woman...does whatever? Well, it got me started each day I guess.) There are 'best of' awards at Holidailies. I've gotten chosen in the past. Not this year. But it's not a contest, right? I knew it was drivel but I posted 32 of them, one for every day from December 1 to January 1. I think they just give you to January 1 to get in 31 of them, but I did 32. But it's not a contest, right?

I had the urge last night to begin a little simple (hand-written) diary. Wherein you just say what you do and who you see and maybe what you eat and drink. I didn't do it. So I'm going to type in here that little 'diary.'

We got up around 7:30. I did my blog, drank coffee, more blogging (for Austin, Texas Daily Photo) and more coffee and I ate a banana.

We made the bed. We try to do this before we leave the house every day.

We decided to walk and we decided to go to SoCo because we hoped Snack Bar was open. We were on the other side of the lake a little before 10. I know this because a 5K race was about to begin over there and they had yet to take off.

Snack Bar was open. I had a cup of white bean stew and the avocado quinoa salad (which also has grilled pineapple). I drank more coffee.

We walked up almost to Oltorf but not quite and came back across to South First on Live Oak.

I felt lazy when we got home. I drank some water. I was reading old (Sunday's) newspapers and decided to go to the gym (across the hall) and read them on the stationary recumbent bike. I did that for about thirty minutes.

I took a shower and messed around on the computer a bit more. Not sure what I was doing. Nothing constructive.

FFP worked on one of his columns. He asked me where a certain book was and I actually helped him find it.

Around five we went to a New Year's Day party. We are pretty good friends with the woman of this couple and her daughter who lives in NYC. We met the woman's husband at a dinner party we had at Congress Restaurant. There were young people, friends of the daughter, and family members and people we know from restaurants and a bunch of literary types. We ate guacamole and chips. I drank a couple of Shiner Bocks. We ate black-eyed pea and collard green soup for luck. It was delicious. The hostess is famous for her food since she catered for years.

We left a little after seven. At home I finished reading all the papers from Sunday and Wednesday's editions. (I'd done the NYT puzzles at Snack Bar.)

In bed I read a few pages of the Stanley Crouch book about Charlie Parker. (If I don't read books until fifteen minutes before I fall asleep I'm never going to finish all the ones I want to read.)

During the night I woke up fretting about a little headache and a scratchiness in my throat. I thought of taking some Ibuprofen or something but I almost never take any pill unless I'm desperate. I dreamed strange dreams about one of my aunts.  I got up once or twice and walked around the apartment.

I was finally sleeping well, untroubled by fears of getting sick, feeling fine in fact, no headache no drippy nose or cough when it was time to get up, get on the tennis clothes and get ready to punch in a reservation to play Saturday. By the time I was dressed FFP had made me a cup of coffee.

Now it's time to make the bed, make some more coffee to take with me and go get in the car and drive to Westwood to play tennis. It's good to have a routine. Unfortunately, my routine yesterday didn't include any of the cleaning, straightening, organizing that needs to be done. As my old buddy Maggie (RIP, Mags) would say 'tomorrow is also a day.' In spite of my lax ways I'm still in the hands of lady luck I think. If not Mrs. Claus.
Posted by LB at 8:28 AM No comments: 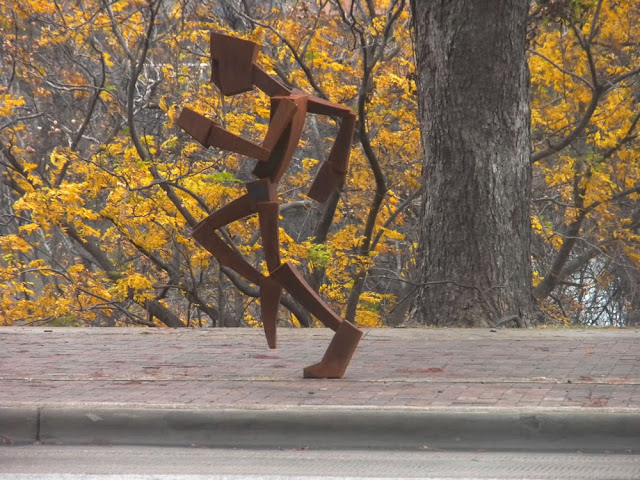 While the world goes on, I seem to be stuck mid-stride. Not unlike the feeling from this solid sculpture of a running man. It appeared in January of 2013 (a year ago!) on Cesar Chavez along Lady Bird Lake. Then it disappeared. I have no idea what the story was. Like so many things in life. What seemed solid is suddenly gone but I'm treading along in the same spot doing things the same way in the same shoes. Well, occasionally I buy new shoes. But yeah.

I guess the new year is supposed to make you feel like you have a vast number of days ahead. So you make those resolutions and you think well you have 52 weeks or so, 365 days. You can develop new habits, slowly changing your life for the better. If you lose a pound a week you can lose over 50 pounds. (By the way, I think it would probably be unhealthy for me to lose 50 pounds. Now 20 or 30. Hmmm.)

In a way, though, it feels like an ordinary day. I'm up at my computers. Yes, I have two at my desk. Sure, I'm thinking of all the calendar related things I need to do. Update the family calendar online. Start a new budget for January. For this I need to review last year's. Of course, it's tax time. I've already worked on some of the tax time chores. We need to start new folders for organizing taxes. Once a year, once a month, once a quarter there are things to do.

I feel still. We have no obligations today. Although, besides the computer and paper work I do need to do some cleaning. There are dust bunnies in the hall. We will stop by a friend's house in the afternoon for one of those New Year's Day get-togethers. We used to give such parties in our old house, serving up black-eyed peas and a pot of sausages and Bloody Marys and champagne. We had people sign a guest book and also write their resolutions, hopes, dreams and memories from the year past in another book. I'm sure I still have those books. But where?

I do need to clean out and find things. Winnow things down, find the treasures. We have lived in this apartment over five years. We aren't likely to move or to remodel so we have to otherwise create an incentive to get rid of things and tidy up.

And yet I'm sitting here. Still. Drinking a second cup of black coffee. Just thinking. And typing. Perhaps I should resolve to do more thinking. Or less.

But no resolutions. Although I know I can keep pacts with myself. After all this is my 32nd entry for Holidailies 2013. I not only posted some drivel each day, but I resolved to read a few entries from other people and did it. I really want to continue to keep up with a few of them, too. Doris Mash, PJ Cleary, and Bev Sykes. This will give me a coast-to-coast and across the pond view of other people and their struggle and triumph. Whether I keep up Visible Woman is a big question. I think I probably won't do it daily. My hubby helps with Austin, Texas Daily Photo and we seem committed to taking its daily posts into their 8th year. Man. Time flies while I run in place.

Note: What did we do yesterday? (This space used to be a repository for the things done, seen, eaten and drunk every day.) I played tennis. It was quite cold at the beginning. I went to the Post Office and sent my passport renewal stuff by return receipt mail. And bought stamps. Price for forever stamps going up. I put gas in my Honda Civic for the first time in probably six or eight weeks. We went to see "American Hustle" at the theater around the corner. Enjoyed it thoroughly. Enjoyed being able to walk there. We'd managed to reserve the recliners. I worked the puzzles in the Times which were easier than Monday's. Hmmm. We went to an early dinner at Congress. The staff dressed in 20's outfits. The food was retro but gourmet. An aspic amuse. A pineapple upside down cake dessert. We walked home and I watched the A&M football game and listened as the fireworks boomed outside. (You have to go to the other side of the building to see them.) FFP slept. I was in bed just before it became 2014, reading my book about Charlie Parker. Oh, I accomplished a few things. I reviewed some tax time stuff and updated some financial spreadsheets. Made some backups. And...put up an entry on this blog.
Posted by LB at 8:51 AM No comments: