A Nostalgia For Simpler Times 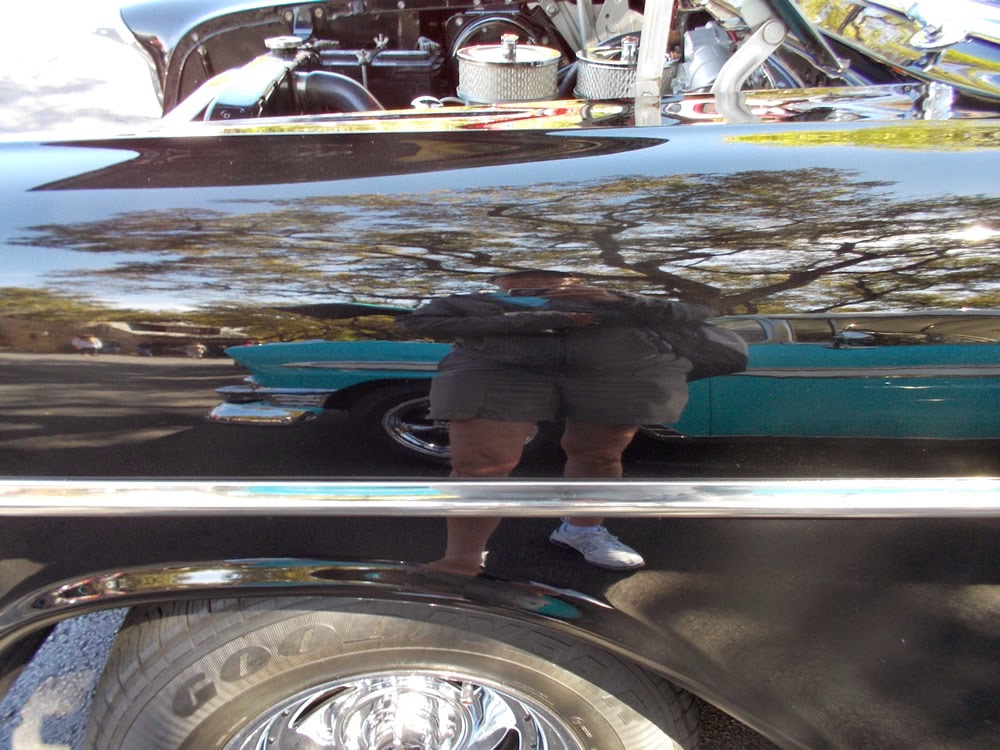 The Picture
This is another reflection picture from the car show. Behind me is an old '50's era Chevy in that aqua blue color. These cars didn't come with Blue Tooth.

The Year
The random number generator came up with 1987. Specific memories of that year are elusive. I have some files on my computer where I have typed in some hand-written notes from old notebooks and journals and scraps of paper. I only found this:


12/29/1987 (December 1987)This morning on the way to work I was thinking about how I haven’t been playing tennis or racquetball. Then I thought about the lesson I bought for The Black Tie/Tennis Shoe Auction. I couldn’t remember Jeff Moore’s first name. Other . (Greg for example) kept getting in the way. Even remembered his wife, Lucy. Then other Lucy’s started popping up---Katz for example. Finally about 9:30 I called FFP, but got the answering machine. When he called back and the phone rang---Jeff sprung to mind. I knew all the time that (1) it wasn’t alliterative; and (2) it was one syllable. FFP had lunch yesterday with Dr. Ernest Sharpe. He told Forrest he was losing his memory. Sometimes I’m afraid I’m losing mine a little fast for a 39-year-old woman.

I'm not exactly sure where I worked at that juncture. It was a time of changing jobs before I landed at my final real job in 1989. It was perhaps a company that was later subsumed by another company and then another. I remember the event in the note (it was to raise money for Women's Athletic scholarships at UT) but not the tennis lesson or whether I ever took it.  I am sort of fascinated by the description of my effort to remember the name of the UT Women's tennis coach which, of course, I don't remember trying to remember. I have to laugh, of course, at my 39-year-old fears. This 65-year-old is both troubled and secretly glad that 1987 is sort of lost in the mists of time. It is either wonderful or sad that this year and this day will be similarly lost. 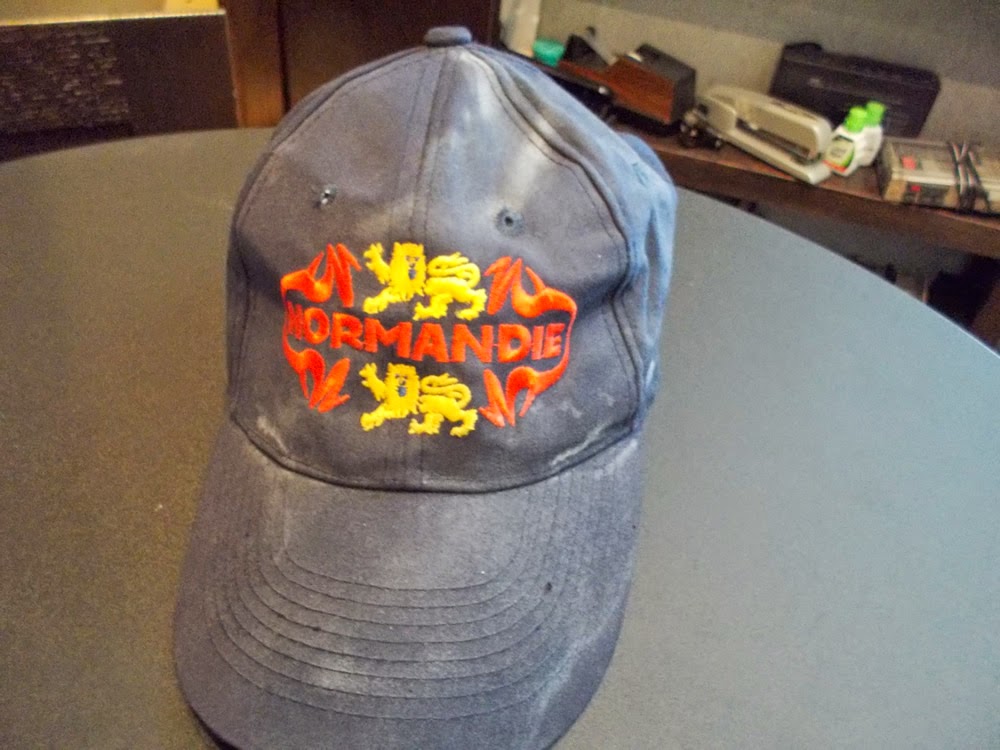 I got a haircut yesterday. It's a tiny bit short and the bed head effect was weird so I wore a hat on our walk today. I bought this hat in Normandy (en français, Normandie) in 2004. We went there for the 60th anniversary of D-Day. It was unseasonably hot. I hadn't brought a cap so I bought this one. It has been worn on some hot walks around Austin in the subsequent years. So it has some layers of salt from sweat. I keep too many old hats around but I particularly like this one because it reminds me of a trip and inspires some memories.

The Last Few Days
I played tennis yesterday and took a walk around Lady Bird Lake today and it occurs to me that I'm happiest when doing these two things. We went out last night and serendipity took us to two favorite hangouts, Bar Congress and Arro, and we enjoyed the food and drink (a bit too much of the latter) and seeing some friends who were with some people we didn't know. Enjoyed a wide-ranging conversation.

Monday we went to hear music at El Mercado on South First. Christine Albert and Jimmy Dale Gilmore. Both yesterday and Monday were last minute choices of where to go and what to do. I like that in a way. Tonight we will probably meet up with a friend who is in town to see his mom. We haven't planned for where or anything.
Posted by LB at 1:43 PM No comments: 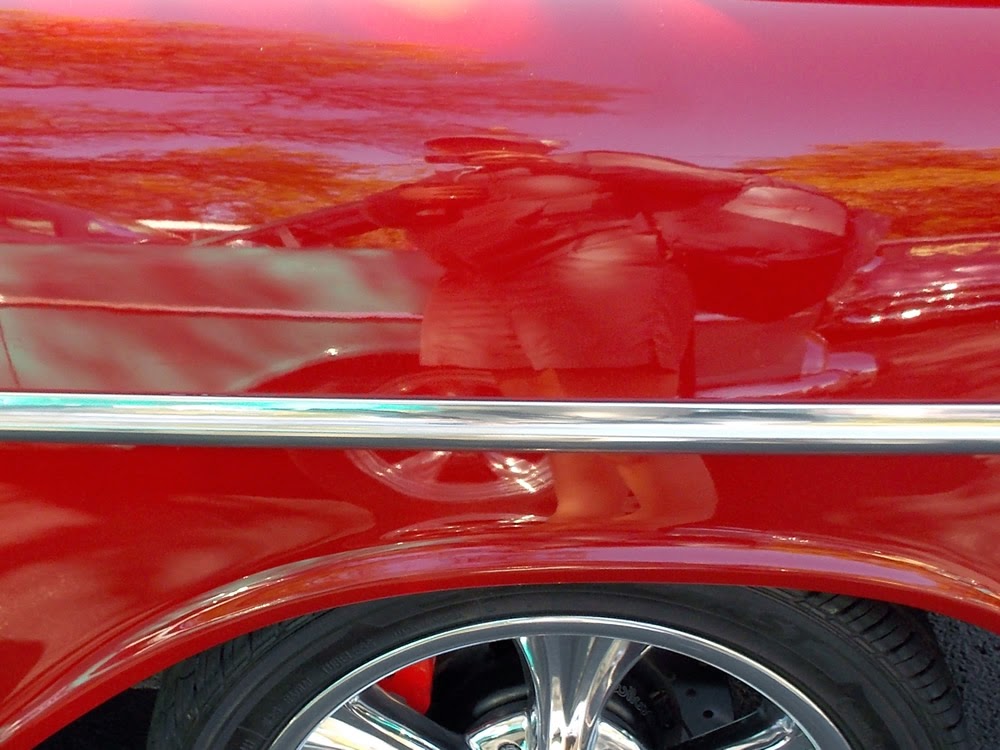 I've been feeling like updating this blog, but have been at a loss about structure. Don't know if I'll keep it up, but today's structure is (1) one of my reflection pictures; (2) a memory from a random year; (3) a reminiscence inspired by a random object I own or have owned; and (4) something I did in the last few days.

The Picture
I took this at the end of last month at a car show at my club. I'd finished playing tennis. That's me in shorts, with hat and my tennis bag reflected  in a bright red car finish along with a vintage aqua Chevy, I'm not a car person but I love all the beautiful reflective surfaces of paint and chrome.

The Year
I used this random number generator to generate a year of my lifetime. It came up with the year 2000.

Wow. Y2K.I remember being on call for customers of my software firm on New Year's day  in case of problems after corrections for the assumption that years were two digits!

I remember buying a house for my parents in Austin and, in May and June, their move down here from Mesquite (near Dallas) where they'd lived for 34 years. They stayed with us for six weeks while their stuff sat in the garage of the new house and we waited for the seller to move into new digs.

Then, in the fall, I had a gaggle of business trips. Las Vegas, Australia, Europe, Wisconsin. In the snow. I remember the fall being so busy with trips all over. But I don't remember too many details. I went to Paris after my Europe duties for fun. I remember doing a few touristy things in Sydney. And drinking lots of Shiraz. And looking down at the tennis courts in Melbourne from an appointment high in an office building. I remember a restaurant in Las Vegas where I went with two work mates. I took a call from my mother there on my cell. My cousin had died of breast cancer. I missed her funeral due to the travel.

The Object
A manual calendar. This is a little wooden advertising specialty.  It belonged to my mother. I don't know where she got it or when but in 2000 (that year again) she moved it to Austin. It is made up of the frame, two cubes with numbers and six wooden slats with months front and back. You can assemble it to be today's date. I remember it in the move because some of the parts were initially misplaced. She found this upsetting. Two young girls I'd hired to help her unpack eventually found them. Inside a sugar bowl, I think. When my dad died I put the pieces in a baggy and brought it home. Not right away, of course, but as I slowly disposed of everything in the house it ended up here. (My mom had died eight years before.) I couldn't bring myself to toss it in with the thrift store donations (of which there were many). I occasionally move the pieces around, but not often. Only recently did I find it in a cabinet and put it on the shelf with books and pictures and artifacts. It reminds me of time passing and the meaningless of things. 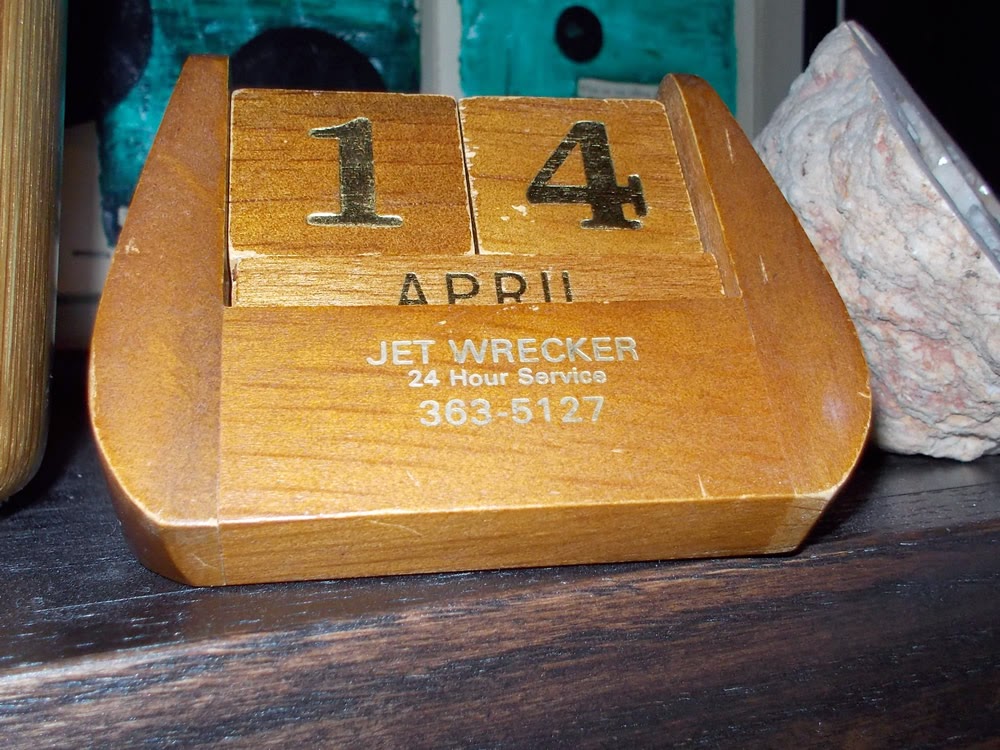 The Last Few Days
We've been 'coming down' from a trip with friends to New Orleans, replete with eating and drinking and doing road trip things. I've been trying to get myself to catch up on chores with house cleaning and such. I did get through catching up on bills and budgets. I approved my tax return for the CPA to efile and I wrote checks to the IRS.

Saturday (the 12th) we walked to UT's Bates Recital Hall and saw the UT jazz orchestra with guest Joshua Redman. He was amazing. I'm so glad we went. (We chose it over several other social events.) There's nothing FFP and I enjoy more than a jazz concert. I have six of his albums in my iTunes (ripped from our CD collection.) I should listen to him some more.
Posted by LB at 10:31 AM No comments: