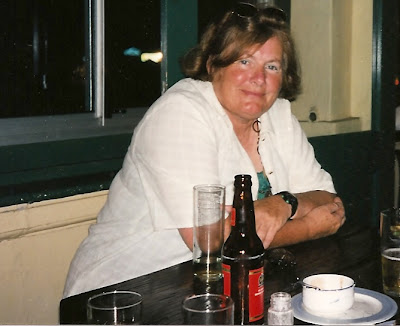 There weren't as many social opportunities online in 1995. But there were some. Like-minded people had been getting together in Usenet Groups for over a decade, bonding over similar technical and non-technical interests. I would scan a group called rec.travel.europe. The name meant it was a 'fun' or 'recreational' topic and not a technical one about the Internet itself or Usenet and such and about travel and, more specifically, in Europe. In July of 1995 I was giving advice on Berlin, where I'd just been, on the thread. Thanks to Google collecting archives I can still find the message I read in the summer of '95. The message was from a woman who'd traveled alone in Europe, something I'd done a bit of and something I might do again. FFP didn't travel too far then, because more than four or five days away from his one-man business didn't work well. I went places without him, for business and pleasure, or maybe had female traveling companions. So I thought it would be interesting to talk to someone else who traveled alone and was close to my age.

So I wrote a reply. Not to the thread but to the author: magie@iafrica.com. I didn't realize when I did that she wasn't living in the states. Just didn't notice the e-mail address, I guess. But she wrote back and said she lived in the Cape Province of South Africa and was a Scot who had emigrated to Canada in her teens, met a South African, moved there, raised two boys and divorced after over thirty years of marriage. And we began to exchange long e-mails about our travels. I had just made a trip to Berlin where Christo and Jeanne-Claude had wrapped the Reichstag. I probably sent her a journal from the trip. She managed to send me a journal from her '92 trip that inspired her Usenet posting. In November '95 she was off to Kuala Lumpar and gave me a detailed account of the trip. We began exchanging mundane details of our lives: friends, neighbors, outings, charities, work, family. She told me all about the Fish Hoek Surf Lifesaving Club where she volunteered training kids to become beach lifeguards and about her work with a handicapped workshop.

Margaret began to mail me postcards of the Cape with brief notes designed to entice me to come for a visit. At some point we decided that I would visit, in January/February 1997.

I went to Toronto on business in June '96. At some point Margaret had mentioned that her twin sister lived there. She insisted I contact her and meet her. And I did. After a meal and sharing some wine and a tour around where she worked, she said, "Margaret and I are nothing alike; but you two will get along well, too." Indeed, the non-identical twin sisters were very different, in appearance and personality, but both lovely, fun, warm women.

So, I traveled thousands of miles in January 1997 to arrive at the Cape Town airport and meet a woman I'd never met face-to-face. Three weeks later I had met so many of her friends that it just seemed right to have a 'going away' party to say goodbye. The above picture was taken at that party. (This trip deserves being blogged some day.)

In the spring/summer of 1997, Mags was diagnosed with breast cancer and underwent surgery and treatment. But she mustered her strength and came to the U.S. in 1998, visiting Austin and other places with us and with other friends. (This elaborate travel itinerary deserves a blog of its own as well and maybe, one day, will get it.)

In 1999, a couple of my girlfriends and I went to London and Scotland. We met up with Mags and a friend of hers from the Cape in Edinburgh (they were attending the rugby world cup and visiting with Mags' relatives and friends in her hometown) and we met her younger brother and many friends of hers.

Mags would suffer a relapse of the cancer again in 2001, but would still manage a visit to her sister (now living in New York State) for the holidays. A friend and I flew to New York City on New Year's Day, 2002, to meet up with her and visit a few days with her on her way home.

In 2004, Mags' son was living in Dublin and she was planning a trip to Edinburgh with a side trip to visit him. She suggested I meet her there so we could be tourists while he was at work. Then he decided to move to Namibia. Undaunted, she rented an apartment at Trinity College and we still met there for a visit. One morning she woke with a swollen eye. We wouldn't know it for over a year but this was another tumor announcing itself.

In 2005, I once again flew to the Cape and visited Mags and other folks who felt like old and dear friends after meeting them in '97 and hearing about them for years in e-mail. Mags didn't feel well and when her eye became swollen again she asked me to take a picture of it and print it on her computer so she could take it to the doctor in case it had gone down when she visited him for an appointment that was scheduled after I would leave.

Finally the doctors decided a tumor was causing the eye swelling and gradually Mags became unsteady and had trouble seeing. She moved to a retirement home from her apartment but had her computer there and through March of this year was writing me with some of her usual wit and vigor. Then I had to rely on her son typing for her or reports from others. In one of the last messages she typed from the retirement home, in March, she said:

Yesterday afternoon I went with the singing group to Frail Care and then to the Alzheimer’s unit. They sing all the old songs like Hokey-Pokey. Some actually know the words while others clap their hands to the music, while others manage to sleep right through it. Fun though and I am sure they all enjoy it. I met up with an old friend, Joey Swanson, in the Alzheimer’s unit and she said “oh are you down here now?” Sometimes feel maybe I should be. Occasionally, I don’t know whether I am Arthur or Martha


You were neither Arthur nor Martha, my friend. You were a special one. Margaret, Maggie, Mags, whatever we called you, you were one of a kind. And you brought so many people together all over the world. Margaret's son, in reporting her death through her e-mail account said it best: "I miss her so much already." I will also miss all the friends I made through her because she stitched us together, communicating with us all and telling my tales to them and vice versa. I fear that I'll lose track of Babs, Gary, Jim, David, Rusty, Don, Dorothy, Dawn, Colleen, Sue, Brian, Buntu, two Andrews, Beatrice, Bryan, Patricia, Francois, Nick, Penny, Vaughn, Ralph, June, Ann, Paul, another Ann, Tom and many others. It was fun meeting all those folks and more. But Mags brought them to life with her e-mailed stories, too. And no one could do it like she did it.
Posted by Linda Ball at 5:04 PM