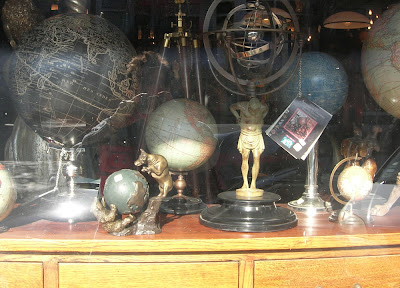 What am I? Six years old? It seems I need a picture and then I can write about it like a kid in first grade. (Or in my case that would have been third or fourth when I finally learned to read, let alone write.)

I had a long walk through Old West Austin with a friend yesterday. We didn't really get to the part I call Clarksville. I've explored this neighborhood many times. (We used to drive here and then walk when we lived further away.) I always find out something new or find something that has changed, however. This picture was actually taken of a shop on West Sixth. I didn't take it on yesterday's walk. I think it was Friday's walk. Walking with a friend you find he has landmarks, too.

I have always been fascinated by maps and globes and, of course, travel. My walking buddy yesterday is a writer. A playwright to be specific. (He has completed plays and had some produced. He tried his hand at a novel, but it didn't work to his satisfaction.) We were talking about writing and he ask if I was working on the novel. I made many excuses (some aloud and some silent). I may have mentioned that I needed to do some traveling to get certain parts of the thing just right, detail-wise. Later, when I was talking about how we enjoy being sidewalk superintendents for all the construction downtown, he suggested that I just write about that and not have to go anywhere. But what would the fun of that be? It did kind of nudge me, though, about the book. I asserted that maybe the entire book was set in Austin and that the other stuff was just background. But important to me all the same. It made me think that maybe if I ever got the protagonist out of the airport (have to decide what season it is first) that I would send him into my very condo tower.

The phone rang once and was answered.

"Come out the middle exit and we are right here."

He recognized Jilly's voice. He had no idea who else was waiting.

When he walked past the stairs and escalator and out of the secure area there was Jilly and his busy seatmate from the plane.

"Did you guys meet on the plane?" Jilly asked impatiently.

"We were seatmates." the woman continued. "But he didn't look like the pictures I had of him and I thought he'd be in First Class."

"And I, for my part, was not looking for anyone at all. I'm Cliff. Cliff Pogonip."

"Of course, she knows, this is Rachel Cline. Your New York representative!" Jilly said, laughing now.

"In my defense, I never saw your picture I don't think."

"Why weren't you in First Class? I booked that myself." Rachel said, returning to duty it seemed.

"When I got to the airport there was a problem. This guy had gotten injured on an overseas flight. Something about a runaway service cart. They wanted to get him home to Austin and needed a First Class seat. Guy was in front of me in line at the airport in a wheelchair with an airport representative. The person behind the desk was trying to boot someone who'd upgraded and was having trouble with the system and it was a real mess. I started talking to the guy and he explained that his foot was gashed and they gotten him stitches but it was swelling. I said to them, look, just downgrade me to his seat, he had a seat, and let's go. I'll be fine. They gave me a wad of upgrades."

"We paid for that ticket! Most of those folks in First Class used upgrades," said Rachel, momentarily outraged. "But that was nice of you, I saw that guy and he looked miserable and you have to feel for the airlines after they injured him, in a way."

"We have to get going," said Jilly who had answered her phone while Pogonip talked to Rachel. "Jack is coming around with the car. No luggage, right?"

They emerged into the perfect cool, sunny sixty degree weather. It was January in Austin and on any given day it could be like this. Pogonip left his overcoat draped over his left arm. As they waited on the curb for Jack and the car, Pogonip noticed someone else from the plane waiting. A young man whose clothes looked German to him...the soft lines of the shoes, the material and cut of the pants and the jacket with lots of pockets and buckles and snaps were his clues.

They climbed into the mini van after throwing their hand luggage in the back. He knew how he'd get along with so little luggage...he had everything he needed here... but he had no idea about Rachel. Maybe she wasn't staying long. Rachel and Cliff got in back, Jilly in front.

"Where to?" said Jack. Jack worked for Jilly most of the time although sometimes for other clients of hers, older people who needed rides to appointments and such as well as her management skills.

"Four Seasons or the condo?" asked Jilly glancing around at Cliff.

Pogonip thought the Four Seasons would be nice. He might could be alone with his thoughts there a bit better. But he knew that everything he needed that he hadn't brought along would be easier to come by at the condo. Actually there were two separate condos although he didn't know what the arrangements for Rachel would be or even why she had come to Austin.

"The condo for me," he said diplomatically, giving, he thought, Rachel her choice.

"Rachel is going to stay at Four Seasons," Jilly said. "She's going to set up there and we are putting up some of the relatives there. You might want to stay there, too, but the condo might give you more peace and privacy really."

"Definitely. The condo. Drop Rachel off first, though, no hurry for me." He looked down at the carpet, feeling suddenly overwhelmingly sad and helpless. There was green dirt and a bit of yellow fuzz on the carpet.

Trying to shake off tears he said, "Been playing tennis?"

"What?" said Jilly. "Oh. Well, I've been taking Charlie to the club for lessons since you bought me the membership." She seemed nonplussed at how he might know this.

Cliff had bought the membership in her name because he could use it all he ever needed to as a non-resident guest. She seemed abashed that she'd used the club with Charlie, her son. Charlie was ten,or maybe it was nine, and he and Jilly were quite a team. Jilly had announced she was pregnant a decade ago and that was that. Nothing was ever said about a father. He'd never been involved with Jilly and he even thought maybe she'd used a sperm donor. He was with Celeste then. Celeste probably knew all the details but he'd never asked her. He liked the kid although his visits were not that frequent and he seemed to have grown a foot each time and exponentially more wise. Thinking of Charlie Kraft comforted him somehow and he shook off the sadness and moved back to resignation.

The van took the fork toward downtown and Pogonip looked up to marvel at the changes in the skyline.

"I've never been to Austin. I didn't think it would look so much...like a city." Rachel said, staring ahead and clutching her bag with the phones and probably other tools of organization on her knees.

Yeah...a few more paragraphs and we got the protagonist on the damn road to downtown. My walking buddy yesterday said, and I paraphrase here, that he didn't think he could ever finish his novel because of the impossibility of handling all the details. His novel was about (largely set in?) Viet Nam, too, so he'd have trouble going back and checking out the details. Even Viet Nam today wouldn't do of course.

Now I have to fly somewhere or pretend to fly somewhere and go out and drive from the airport to downtown. Damnable details. The last time I flew, I took the fork toward North Austin when going home from the airport. Anyway, there you go. My friend and I talked about how our fictions (his plays, my unwritten novels and short stories) are playing out in our heads even when not captured. We talked about taking people we knew and taking them forward in time. Or backward. Of course, I think the latter is what we always do...taking people we know and inventing or filling in the back story. How could we write about a character if we had no prototype? How about science fiction? Did you read Michael Cunningham's "Specimen Days"? Yeah, I could really get into the alien life forms in the third part of that one. I mean their emotions even. I listened to it on compact disks, I think.

Yeah, so I've written a little more of the novel. None of my readers (hi all five of you) have clamored to read more. I've introduced five people in the flesh and several by reference. I'm edited the three pieces that proceed this fragment (one, two and three) multiple times. I have made all these decisions about details and I'm lost in them. I told my friend yesterday that plays might seem easier but they consisted of the hardest part almost exclusively, dialog. He didn't disagree, really. But maybe I'm wrong!
Posted by Linda Ball at 8:22 AM

Well, we're trying not to pressure you! But the novel *is* getting interesting so carry on. You do realize that if you keep going back and changing too much you're going to have to keep changing the future.

Good fragments, for the most part tighly written and appealing. I have a probem with Pogonip as a name--can't help giggling, thinking of Pogo the cartoon possum character and "nip" as short for catnip--but that's my problem, not yours. Keep writing! You can always go back and edit later. (Yeah, no pressure here!)

Pogonip is an obscure word. Did I mention that? It is a funny-sounding silly name but I can't seem to let it go. I doubt it is anyone's REAL name but you never know.