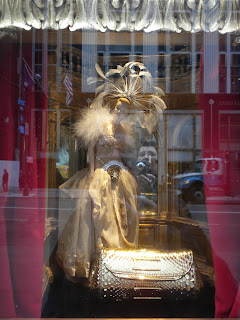 I just noticed that today's Holidailies writing prompt is 'What is the best thing you ever received for the holidays?' I had just edited the picture above with the intent of using it for a piece with the boring title 'Shopping.' This is one of the 'jewel' windows at Berdorf Goodman in New York City. For the holidays they have little doll-like mannequins offsetting the jeweled baubles. Personally I don't have or want much jewelry but isn't this a lovely picture? Yours truly is reflected with her handy digital camera. One of probably six or seven digital cameras I've owned. None were gifts.

But one of my best gifts was a camera. I was in my teens and I was dying for a Polaroid Land Camera 100 with chrome and leather trim. You could get one for probably $120 1960's dollars. A lot of money. (A little inflation calculator I found indicated that it would probably be equivalent to around $900 today.) You could also get one for a bazillion books of S&H green stamps. My mom let me have her stash and I continued getting hers at the grocery store and pasting them in books. My grandmother gave me hers. I had nowhere near enough. I had maybe a dozen books. The camera required 40 or 50. My mom talked me out of the stamps, reasoning that other nice gifts could be obtained. I was crushed that I wouldn't get the camera. It was way out of range for a present back then. But on Christmas morning there it was. I took probably thousands of pictures with it. My folks gifted me portrait and close-up lenses. I was always using babysitting money for film.. My nieces, born in '68 and '70 after I was out of high school, were endlessly photographed with this camera and the originals and copies of these are cherished possessions around the family. (We used to mail the originals to Polaroid. On the adhesive backing they provided was an order form. They'd reprint the photo in different sizes.) Here's my youngest niece, just sitting up in 1970. 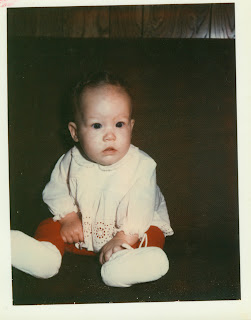 Yes the camera was wonderful and quite a coup to get and, unlike so many other things, the pleasure lasted a long time. I took it to college. I had it at the ready for many family gatherings. I'd stand there, posing people and then deftly snapping out the developing print and guarding it until it was dry. There was much chemical waste. And those flashbulbs that popped and crackled and heated up, only avoiding exploding fragments because of a plastic-like film over the glass. I kept the camera long after it was functional for sentimental reasons. When I downsized I gave it away to a Freecycle contact who wrote later that he'd repaired the bellows and made it work again. Of course, film is problematic although there is a group that bought Polaroid's factory machines and was attempting to make it available again.

But if the camera was my favorite gift, I'm pretty sure the Christmas when I was nine years old was my best overall Christmas coup. I wanted an Erector set. And I got the best one imaginable. It had an electric motor and it was the Rocket Launcher set and it had a picture of a 1950's little boy operating the rocket launcher he'd built. I was a wily little girl and when I picked this Erector Set out of the Sears catalog, I also picked a gift that would be considered educational and unisex: a metal world globe with little Disney characters in costume. And, yes, when we returned to school and were asked to say what we gotten for Christmas that we really liked (how politically and socially incorrect that would be these days) I talked about my new globe. I still have the Erector set. The globe went to a charity when I graduated from high school I think. I kind of miss owning it and still look on eBay for one now and then.

These days I don't want for anything. I don't have a Christmas list and, hopefully, I won't get too many presents. When I want something, I usually just buy it. While we were in NYC we looked in many shop windows but only entered a few stores. Our only purchases were two books at our favorite Manhattan indie bookstore. But I still remember the excitement of not having something, of wanting it for a long time and then finally receiving something that really did, in the end, please me to own. That's tough to achieve, I think.
Posted by Linda Ball at 1:06 PM