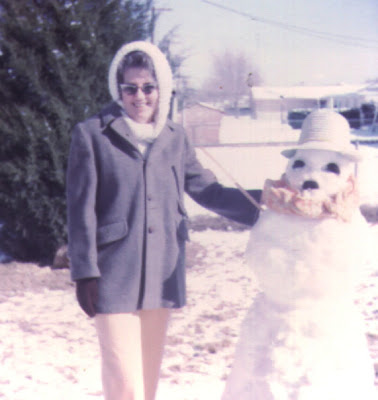 You know the topics I'm avoiding? Yeah, those. Well, it's hard to stay true to that because those things have really been occupying my bandwidth and my thoughts. It will even be hard to write about my mother without touching on those topics. But I'll try by going back to a time when everyone was younger, we had lots less stuff and plenty of excitement about Christmas.

I found this picture on my computer. I scanned it at least four years ago because it was in files I transported from desktop computer minus one. I'm guessing 1960's, early. Definitely in the back yard of the house in Sherman. The house we all left in the summer of 1966. By 1966, my sister was already married and I was off to college and this place we'd called home since '58 or so was sold and my parents moved to Mesquite where they would stay until 2000 when they moved to Austin.

Observations: (1) It doesn't usually snow this much in Texas, not even near the Oklahoma border, but we have assembled a credible snow man; (2) my mother looks young and beautiful to me (she was only early forties if not still thirties); (3) she is warmly dressed and the coat might be a few years old but she has an eye to fashion; (4) I have no idea where we got that scarf and hat for the snow man. I don't remember anything about the making of the snow man or the day but the picture makes me think about Mom.

In her later years, we tagged Mom as a hypochondriac. But you know that sad joke? Just because you are a hypochondriac doesn't mean you can't get sick? I'm not all that sure now that she inflated her troubles. She just had the bad luck to have confounding and frustrating illnesses that dealt her big blows without getting the solid diagnoses that garner sympathy from doctors and family and friends.

Actually, Mom soldiered on when she was young and healthy, largely ignoring how hard physically and emotionally her life really was. She cooked for us, got an education and taught school to help support us, labored around the house, drove us places, nursed us, made clothes for us, cleaned those clothes. And she made sure that we had fun times. She let us give parties. She decorated for holidays and found money for Santa and then surprises from her as we got older. We didn't have a lot of stuff. I have pictures from this era that amaze me because the walls of the house are so bare. We didn't have a lot of paintings or things to hang on the wall. Mom had grown up poor and started her marriage in a house with no electricity and a propane heater. She treasured things she managed to get and she loved that house which we bought new in the late fifties in a little subdivision in a small town. The small town was big to us because we came from a smaller town and we lived on a farm outside town at that.

My mother always made my young life better although she also made me do chores and enforced her rules. She cherished us. She loved having us at home and she would tolerate our friends much more than other parents.

Mom loved the holidays and there was never a question of decorating. We had ornaments collected over her life time. We put up an artificial or real tree, carefully got everything out of boxes and scattered those aluminum icicles around. We fought with lights that ran in series and whose cords were tangled from our inexpert packing the year before. When the tree was up, it collected brightly-wrapped surprises and we could hardly wait to see what was inside. As we got older we tried to have surprises for others, too. One year I bought my mom a punch bowl and cups. I'm sure I had the idea that it would serve my purposes, too, for the little parties she let me give. We loved to give each other obtuse clues about gifts. I told her that her gift was a fire extinguisher. I thought I was hilarious. The thing is, she always went along and laughed at my jokes.

Mom and her mother made homemade rolls and cinnamon rolls at holidays. They made this giblet gravy for the turkey that I crave to this day. As Mom grew older she sometimes simplified the recipes but she still tried to make great family meals. The house in Mesquite sometimes had several dozen people at Thanksgiving or Christmas. She juggled huge turkeys and vats of food and multiple pies, no problem.

Mom loved dressing for the holidays, as she got older, in silly Santa socks, Christmas-themed clothing and Santa jewelry. She loved bright clothes, all the more as she got older.

As Mom's health faded I became the one trying to take her places, buy her things, nurse her. It's easy to forget how vibrant and unflappable she was when this picture was taken and, also, before that on the farm. I remember sitting on the stairs to the basement watching my mother lift two gallon buckets of milk from the high window to her work table where she strained some for bottles and churned some for butter. She would give me a little half pint bottle, the milk still warm from the cow my dad had just milked. I'd sip it and watch her strong arms squeezing the water out of butter and making it into a neat block. My parents were all-powerful then. And they played their roles well. It's easy to forget that when they grow old and infirm. I need to remember my strong Dad, too, outside that basement window handling the farm chores before he went to his job as a hospital attendant. Life was such a struggle, but we were so protected. And Mom especially so embraced the things that excited us like holidays and birthdays and trips somewhere off that dirt road into the world.

Thanks, Mom. And great snow man!
Posted by Linda Ball at 9:50 AM

What a beautiful tribute to your mother.