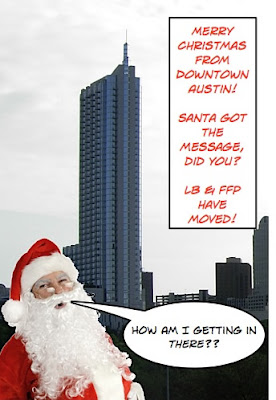 So one thing I do like about the holidays...is???? Exchanging cards. Even if it's just a note in a e-mail (no e-cards, please, and not a 2M file in my in box either) that you donated to the Heifer fund and verifying your contact info, I think the annual 'ping' to say "We're here, how 'bout you?" is an excellent thing.

In the past I've done extensive 'research' into the cards we received. (That's ours for this year above even though I showed it in a prior entry. There aren't many rules here in Visible Woman land.)

This year, though, I've just made three stacks on my desk after pickiing up today's mail. (Which did include a few late entries. I'm sure a few more will straggle in and some will claim New Year's Day or even Chinese New Year.)

Anyway. Pile 1. Photos of the family. Twenty-seven. Kids, grandkids, dogs, vacation shots, sports shots. Babies looking cute. And two prize fish and a cow. (The latter because the lady of the house got a bovine pericardial valve.) One of our brokers sent his annual picture of him on the phone at various locales. Which is funny, because that guy is hard to get off the phone. Enjoyed them.

Pile 2. Cards. Forty-nine. Animals, snowmen, trees, ornaments, doves, other birds, earth upon which peace is wished; Santa, holly, flamingo with Santa hat; cats, dogs; wreaths, a martini glass full of cherries or is it holly berries?; an Ansel Adams tree in the snow. No dups this year. Lots of fun variety. Top five honors to (5) Jody Conradt silhouetted with a Texas Tower and fireworks (although since I recognized the back of her head...maybe this should have been in the photos pile); (4) Santa golfing, but really a winner because inside was an actual almost letter in long hand, remember longhand? from a friend in South Africa and the two pretty fish and the elephant on the stamps...that's the only envelope I saved after database update; (3) Santa holding a string of lights that you can push a button and light up x times (it's still working...I've been judicious pushing though); (2) the martini glass with the...maybe they are holly berries, a winner because it's such a cheery card emphasizing drinking and it made good use of silver embossing to make it look like a glass with liquid and because it was from new friends who really know how to throw a party; and the number one card (1) , winning because of the total audacity of it....the Last Supper with a bubble with Jesus saying 'You're All Fired.' I'm so thrilled I know someone who would send that to me!

Pile 3. A letter to all reprising your year. Ten. My favorite is always from an old work buddy who has some pretty cool kids and a wonderful, interesting wife and a way of making this annual wrap-up amusing, but he was given a run for his money by friends in Vancouver, WA. Yeah, I usually read all these to the end. Noticed that there were invitations to visit Hawaii and Omaha. Do people drop these invites figuring no one is still reading at the end?

Anyway, there you have it. I enjoyed sending cards and all the cards, letters and photos received. Sure, they are going to have to get tossed shortly (no room to save them for years like I sometimes did in the house). But it was fun and the best part of the holiday for me. So if you sent something or wrote an e-mail for an update, thanks a bunch. If you didn't, that's fine, too. If I sent you a card, you're welcome. If I didn't, sorry you aren't in the database.

O.K. Linda, I get it. I have to send my letter in a really good, creative Christmas Card - like the ones you and Forest design! I wasn't exactly in the Christmas spirit this year either - although there is 2 feet of snow here in Vancouver!
We hope to see you this year - now that you are all settled in.
Happy New Year - I'm not looking forward to 09 either! Bah oba ma! Just kidding! T & C

Hey, I gave you a close second on letters. I loved your letter. I hope we can get out there, too!