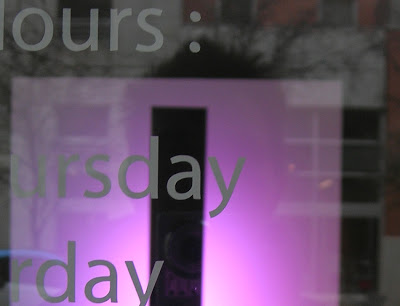 Days slip away, but some little mementos yank us back to another time and place. Today's Holidailies writing prompt is "Tell us a story behind that thing hanging on your wall over there."

I glanced to my right and there was a little memento box with three things framed and matted: a picture, set of three business check book receipts and a hand-written receipt.

The picture shows yours truly in 1977 along with my husband of less than a year (FFP). We both have long hair. We're posing lugging a box up the steps of a house where we lived together for over a year (he'd owned it since '72) and where he started a little advertising business called Good Right Arm. The box? It is a brand new electric typewriter. The check stubs record checks 101 through 103 and are for purchases of stationery (second sheets), business letterhead and an initial deposit on a phone answering service. The receipt is for the typewriter which used fancy ribbon cartridges and for a supply of the cartridges. That was the beginning of the business. FFP ramped it up to a full-service agency and ran it until 2005 when he eased back to a copy writing service like when he began. Only now he does only what he wants to do, writing articles for local publications.

I would have exhibited the memento here instead of yet another shop window reflection self portrait but I think the glare would spoil the fun of describing it. We used a tiny bedroom in that first house for an office for the first few months and then we moved a block away on the other side of the street and lived there for 31 years.

I'm not sure what made us decide to frame the stuff. Probably at some point, winnowing records we decided to save these first things and we had the picture, shot by a friend visiting us from Dallas sitting around in another frame for years on the mantle. FFP decided to preserve it this way. Just now, unaware of what I was writing over here, he was beside it, disconnecting his iPhone from the charger and he said something about what young kids we were. Indeed, we were 28 and 30. Amazing.
Posted by Linda Ball at 7:32 AM