You Don't Know What You've Lost 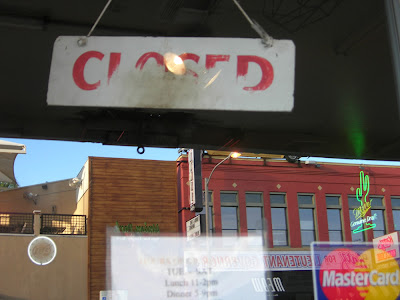 Take something away and then you appreciate it, right?

Actually, I like to think I was appreciating things right along in the moment.

I was happy to wake up every day without my hands stiff and aching. I didn't know what was coming with the hands, I guess, but I woke up feeling good and I appreciated that. My dad used to say "If people don't drink then when they wake up, that's the best they are going to feel all day long." My drinking hasn't caused an unpleasant awakening in a long time. But the hand thing has made the first thing in the morning a hangover for my fingers.

When Dad was taking care of his own needs (apart from the help we'd arranged for yard men, cleaning, handyman, errands), I appreciated that. I appreciated that other people with parental units as elderly as ours had more demanding responsibilities. (FFP's duties still center on shopping and errands, amazingly, since his folks are 99 and almost 90.) Dad is working hard after a bad six weeks to get back to virtual independence. He spent 13 days of the last six weeks in two hospital stays and had four procedures and lots of intervention and tests. He's been to doctor's offices three times and to a pre-opt visit to the hospital and another emergency room visit. He's had several visits from a home health nurse, several from a PT specialist, etc. He has an evaluation from Occupational Therapy on Friday. I figure his ability to dress himself, go to the toilet and even cook is proof that he's getting back some facility. He's dealing with a lot. And I would be lying if I didn't say I long for when he was more self-sufficient. He told me yesterday that he had his last car wreck (and subsequently gave up having a car) a year ago. I admit that when he could still safely drive a few places and do his own thing that I appreciated that. I knew it might end just as FFP's Dad gave up driving (his mother never drove) because of his poor vision and that ended a lot of their independence. (Although his parents took cabs for a long time before they felt that was too onerous after a failure to pick up at the grocery store.)

This is where we are now. My health is good if my hands are trumpeting my age. My dad is improving after the latest interventions have halted a rush to possibly fatal anemia. And I don't really know where he will land. I'm going to monitor it until after the holiday and then, if necessary, get him additional help to stay at his house as he wishes. It would be easier to go to assisted living where meals and other services would be more straightforward. But he resists it. He knows how he would feel if he lost the ability to be in his own private space. I think he felt that during his recent hospital stays.
Posted by Linda Ball at 6:18 AM