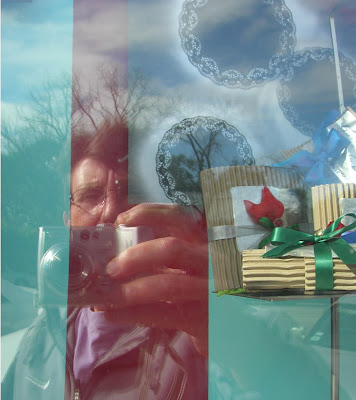 As the new year approaches, it's time to wrap up the holidays.

It's time to put away the box of left over cards from our holiday mailing. When we moved I found lots of these stuck away here and there. I saved a few examples and recycled the rest. For the record I think I only used shop window reflections in one holiday card. I think the shop window on that card was in Paris, not that you could tell. I am extremely enamored of today's shot (not in Paris but on Second Street) because the tree and my hair seem to spike together although I could wish my hair was spiking more as here and here. But I digress.

It's time to figure out how to dispose of the cards and 'year in review' letters we received. The stack weighs a little over two pounds. All envelopes save two have been discarded (after checking any address info against the data base). One I haven't yet discarded ihas some lovely stamps from South Africa and the other has a Gary Cooper stamp (card sent by a guy who is named Gary Cooper but is not the long-dead actor).

I counted 104 cards. We probably sent a little over twice that many. Forty-eight included some sort of handwritten note beyond just a name or Merry Christmas. Twenty-eight wished us 'Merry Christmas' but only a handful had an overtly religious theme like a Bible Verse or the Wise Men. Not one Baby Jesus. Forty-one had family pictures, thirty-two with children (of all ages, among our demo if they were young kids they were often grands). Eleven included the family dogs. Wishes for Joy (15) , Peace (16) , Hope (3) and Love (14) appeared. Ten featured, primarily, snow. We don't get much here. There were the usual appearances of toys, packages, trees, stars, ornaments, penguins, Santas, flowers, birds, angels, sleds, holly, wreaths, doves, stockings, etc. Only two had a Southwestern theme. I didn't count how much UT regalia appeared but there was some. Odd one off examples featured a map of Africa with little children angels, a cartoon cat band, a cartoon hippo band and a painting by the sender's grandfather of a landscape.

All in all, a delight, were these cards. But now what do I do with a two-pound stack of board, paper, glitter and other odd material? I'll review them one more time, cursing the glitter, toss the paper in recycling, save a few cards for future decor and toss most of the family pictures and glittery, printed, maybe die-cut board.

For presents I received money and several books and some candy. FFP and I got some fine wine from a friend. We received some homemade zucchini bread and cookies. Less is more. I'm dying to find a moment to sit down and read the books. (While eating candy and cookies and drinking wine?) I gave money, mostly, plus some toys and games to young kids and iPod Touches (in spite of my disgust with Apple) to older 'kids.' I gave champagne, whiskey and wine. I gave my Dad a book showing pictures of him beginning with himself as a boy and including one with he and my sister and me as a baby and then others along the way including one of him with each grandkid and great grandkid as babies. I didn't mean it to be his present (and only present) but he liked it so much that it worked out. He showed it to friends and to the strangers doing home health. I usually give him a book but he hasn't been reading many books of late.

The year is almost gone. Normally I'm tempted to make resolutions. But not this year. Not even snide or silly ones. Not even grand and lovely ones. Whatever happens, happens. The year 2009 taught me that. I plan to start trying to organized for tax season, get my Dad situated in his new, alive but with some struggles, mode. I hope to plan some travels, do some writing, get my computer situation more stable. Clean, organize, discard, repeat. Do some tennis, exercise. Eat and drink. Well, maybe not drink SO much. Same old routine with verve (I hope). After losing five pounds the wrong way (stress) I make no resolution on weight loss. Whatever happens in 2010 will have me along for the ride. Doing chores. Making lists, checking things off them. If I feel the need for resolutions, I'll go to the well of past blogs and journals. Just recycle an old list.