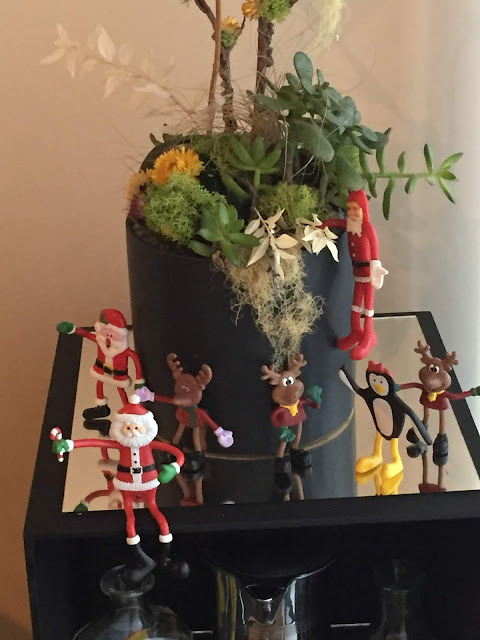 I think Boxing Day has something to do with charity. Not for me, however. We have a Boxing Day party to go to tonight. It is about frivolity, I think. Maybe Boxing Day should be about boxing up the decorations like the ones on this table with the fast-failing plants. Plants don't live here. We cycle through fresh flowers but plants are doomed in our care. Anyway, now the decorations are just a burden, something to be put away until they, maybe, come out next year. I have to go through the cards and annual letters, too, and toss most of them. I keep neat ones to put out next year. Every year fewer and fewer actually arrive in the mail.

I wrote a year-end letter. So far I've sent 54 of them. We received 50 cards and letters (that weren't from businesses or charities).

My husband and I exchanged gifts yesterday. He gave me a lovely wool scarf. I gave him an expensive tie he'd admired when shopping for a sports coat at his favorite store. (Which was really one of his 'presents.') But we each had a surprise for Christmas Day.

Spent all day inside. We watched "Five Came Back" on Netflix. It is about five Hollywood directors who went into the service in WWII to make films: John Ford, William Wyler, John Huston, Frank Capra, and George Stevens. The series is based on a book by the same name. (Which we've owned for ages but neither of us has read.) We watched "Giant" which we have on DVD. It's a holiday tradition with us and, although it's not a Christmas movie, it has a great Christmas scene. That is a movie George Stevens made after he came back. Then we found we could stream "The Best Years of Our Lives" on some service that streams free with random commercials inserted. That is a movie William Wyler made after he came back.

We had banana 'pancakes' (actually banana and egg mixture fried up) and bacon (which we rarely eat at home) for brunch and taco chicken nachos for dinner. (Chicken cooked in taco seasoning atop cheese and onions with jalapenos.) I had one Manhattan and some nuts while watching all that tube.

I woke up today determined to 'get stuff done.' I wrote a couple more letters, worked crosswords and Ken-Ken and such in the papers, read some sections of the papers, drank four cups of coffee and it's getting toward eleven. I haven't been keeping a daily for Holidailies, but I don't really regret it. I have at least done more than since the last Holidailies. Now...to pay some bills!
Posted by LB at 10:42 AM