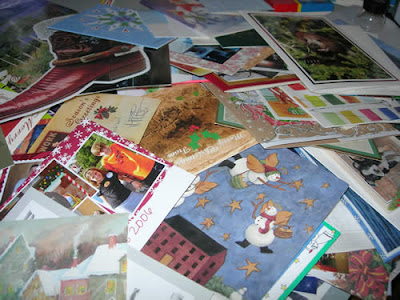 Sure they are still arriving. Some came yesterday and some will probably come today (kind of unfair that Christmas Eve was a Sunday, huh?) and those professing to acknowledge only the new year, well, they have until well into January. Still, I thought a wrap-up was in order.

I didn't count the 'e-mail only' missives. I counted everything else I didn't lose track of around the house. There was only one that kind of puzzled me with that 'hmmm...what is this signature, who sent this?" now that the card and envelope were separated.

For the record, I counted an even 100. About twenty were from businesses or charities seeking out continued support. Ten consisted of or included those famous mass mailing family letters. (Love 'em. You folks are so busy and interesting. Sorry about the car wrecks and dead aunts and stuff. Cheers to the kids graduating and doing eight sports and all. Wow! Lots of exotic trips. Do all you people ski?!!) Twenty-nine included a hand-written note of some substance (not just a signature or a 'happy holidays' but you know something that indicated the card was to us). Thirty consisted of or included a family photo...sometimes just the kids, sometimes the adults, too. Pets appeared on a few (I didn't put a column in the database for that). I counted only nine that were really overtly religious. "Merry Christmas" didn't qualify. I was pretty strict on that. I counted a manger scenes and bible verses or repeated references to God. Only nine. I received no cards that acknowledged Hannukah although a few were from Jews who wished everyone some generic seasonal greeting as did most of those with Christian beliefs or (perhaps) none at all.

Only two cards were handmade and those were produced on the computer. I didn't count store-printed custom cards as handmade or the ones you sent off to Snapfish or whatever. Yeah, I did that. Not hand made unless you at least printed them on your own inkjet, cursing when a cartridge ran dry at the last minute.

On five cards the a primary message was Peace although this message was subtly conveyed in others.

As to the decoration (apart from or in addition to the thirty family photos) we had abstract trees, an African elephant (that one was from Cape Town so...fair enough), four principally involved angels (and, no, I didn't count them as overtly religious...go figure), one had a NY-looking apartment building and bare tree in the snow (from a Jew who lives Upper East Side so, yeah), one featured a basketball team in orange Santa-style hats, one featured primarily bells.

I received two (only) that were completely identical. They featured a blooming cactus drawing by a young cancer patient. Produced by M.D. Anderson. One of the senders is there now and we've just received a most hopeful call about the bone marrow transplant success. Yeah. Weird that we got two of those. We also got another kid's drawing from that series.

Two cards featured cowboy boots as I mentioned earlier in this boring blog. One card had a cat with a candy cane tail. You'd have to see it. We got four that were predominately Christmas trees (besides the abstract mentioned above). One was drawn by the cancer patient, as mentioned. One tree was decorated from green sequins.

Snow and snowmen were on a lot of the cards in some form. And most of the snow cards were from places that haven't seen a flake this year as opposed to, say, from my relatives and friends in Colorado where multiple feet have fallen. Have you heard of snowmen angels? One card had a snow scene painted by Claude Monet. There was a church in one of the snow scenes but, no, I didn't count it as religious. Quote the bible or trot out baby Jesus or a star of David. I'm strict. One was a picture of a house in a Houston suburb. With snow. We always snap pictures of our houses down here if it ever snows.

One card featured a dog and a nutcracker and dirt. Dirt where a young couple hopes to build their first home.

Simple greenery or holly was featured on six cards. One featured a Japanese panel. Six or so relied just on the family photo for decor.

One from a downtown high rise builder featured their logo with a tree on top and language alluding to the tradition of topping out a high rise. They have a few dozen stories to go. Hope they make it in 2007.

Naturally there were longhorns. This is Texas and Austin, home of the UT Longhorns.

One card, only one, featured a manger scene with the baby Jesus.

One card featured ornaments. One a paintbrush carrying paint in the image of the Texas flag.

One had the word peace with calligraphy and trees.

One had Peanuts characters doing Christmas.

One had a photo of a bear among trees.

One had a photo with cactus in the background.

Four had poinsettias necessitating me looking up the spelling.

One card featured a quilt. Not a holiday theme quilt either.

A rabbit was the main character on one and a reindeer on another.

Santa appeared on eight...with Artic animals, on the beach, with a cat who was stealing his milk and cookies, etc.

One card had a tree with birds, dogs around it, tennis balls and rackets and PEACE imbossed into the paper. I didn't really get that one exactly.

One had a tree background with a vintage photo of old folks imbibing.

There were three wreaths. One was decorated with birds which were identified. That one was from some serious bird watchers.

My favorite card was unique in featuring a flame and fireplace. Yule log? Whatever. On a small card there was a white layer on the front revealing yellow and orange behind it in a flame (but vaguely dove-like in one case) shapes and inside a pop-up of a yule log on andirons. It's just clever and different. I may keep it.

Because, yes, I'll probably have to throw away most of these. I used to save Christmas cards, at least for a year or two and then sort through them and weed them down. I hate tossing all your letters, hand-written notes (!), photos of your children. But really after a few years it would be several cubic feet of stuff. To keep. So I'll sift through them again in a week or two and have to let a lot of them go. I'm keeping the pop-up fireplace in my decoration box, though. And I think I'll save that one of blooming cactus with my friend's silly poem inside about her recovery.
Posted by Linda Ball at 12:35 AM

On the 27th, we got two more cards. Both had personal notes! It takes longer to really write something, so yeah. One had a family newsletter so that makes 11 of those. This one included camping and scouting. Camping and scouting are right up there with skiing as activities for people who write newsletters.

One was decorated with ornaments. The ornaments were decorated with snowflakes. The other had abstract gold swirls on red velour. It was a frame for a photo of the young lady of the house. Upping the family photo count to 31. This is definitely an important trend. Photos are tied with personal, hand-written notes at 31.

On the 28th we got two cards. But they were both Happy New Year. One was an amazing card from MOMA with a pull tab that causes a ball to descend on a stylized Times Square. The other had 2007 on the front and weird New Year's customs printed inside. Both from businesses but one with a personal note from the owner and no indication of the businesses (three restaurants and a catering service)so, I guess, really personal. The other was a business card but the employees who signed are very dear friends.

For the record, I'm thinking of sending a New Year's greeting next year. Mainly because I have a cool picture in mind for it.

And we got one card that was sent to my in-laws by mistake. Thing is...we have no idea who sent it. It has a photo of a stuffed armadillo, upside down drinking a Dos Equis (Lager). It says "Happy New Year! << [pointing to the armadillo] My Dog Spot; Lets [sic] teach the World to chill! CLYDE (photo by DRB)" on the front. On the back, handwritten, Happy New Year, Clyde (aka Dan B). Yeah, well, hmmm. Don't know who this might be. FFP says the only Dan B. he can think of would not make the apostrophe mistake and would send a card from both he and the wife. We know two Clydes (family) but the name is obviously used as some sort of humor or disparagement by Dan B. The good news about this one? It gave my mother-in-law fodder for two days now and nothing much interesting happens to her.

Here it is the last mail delivery day of the year and we got another holiday letter. And another card...another family photo, multi-generational (we got at least one other like that) with just a tasteful green with pine cone and evergreen background. Maybe more cards will arrive next week. It's been fun this year, folks. Thanks for playing along.

For those keeping score we received a card on the 3rd of January (after three days of no snail mail) that included a family photo of a single mom and her kid with a cruise ship in the background. Chalk up another family photo. The decor chosen was palm trees with Christmas lights and the greeting 'May Every Day Be a Holiday.' There was a long personal note on the back.

This may be the end of holiday cards...but you never know.

There weren't any holiday cards yesterday but today (the 5th) brought a happy new year one and a family photo (three generations) and a little note. I don't know the people well but they are good friends with my dad. I met them for the first time this last year after hearing about them for years. Today I sorted the cards I received and decided on the ones to keep. The total count received stands at 108. It's a fun little tradition, I think. I know Hallmark and all these photo-finishers think so.

No, I didn't get any more cards today. I think we got a Happy New Year yesterday from a business. But today I found a card while tidying up some books. I think I displayed the cards in the living room on the shelf with these books and this one got left behind. The sender kindly identified the card's year by saying 'best wishes for 91.' Seventeen years ago? Yikes. It's a neat card, too, with a die cut of a little kid peaking down some stairs that opens to Santa having snacks under the tree. So I think I'll save it. I am abashed that things can get lost like this in my house ofr seventeen years. Geez.