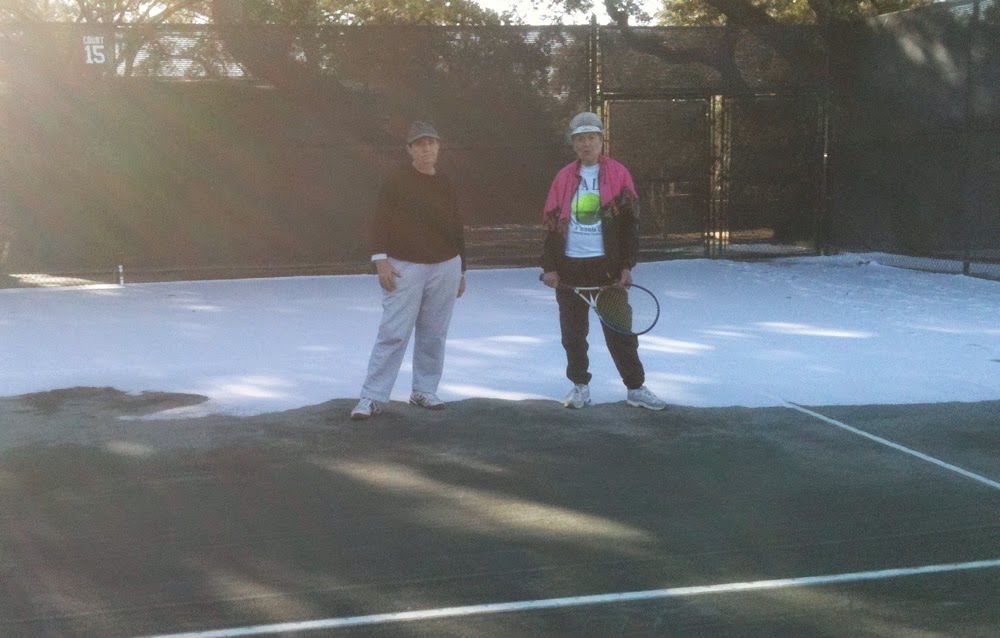 No, it hasn't snowed in Austin this winter. But a few years ago, it did. 2011 I think. We had some light accumulations and it was still pretty cold. My friend (who was only 80 in this picture) and I got another gal to take our picture with a phone. This clay court had a patch of shade and the snow hadn't melted. We actually played on the one next to it or maybe a hard court. I know we actually played although I don't think there was a fourth victim. This isn't the coldest day we played because...no mufflers or gloves.

We don't get a lot of snow in Austin. (Understatement.) Unfortunately for the last few years we haven't gotten enough rain either. The temperatures occasionally get chilly, more rarely actually cold (below freezing) and the wind can bite a bit.

Suffice to say: it's hard for me to give up my tennis game.

The nice lady on the right above organizes a social game every Tuesday/Thursday/Saturday. She's done this a long time with different casts of characters. Most her age have quit the game (of tennis or, you know, the entire game). However, the other Saturday regulars are both older than I as well. I have participated for about 10 years. We try to play three sets of doubles with each partnership. If I'm there I start with this kind lady. We play for two hours or so. We hit a lot of balls. Most points are won when someone makes a mistake rather than by clear winners.

When I'm on the court, a lot of the rest of my life falls away. I concentrate on the balls, my racket, the wind, a leave scurrying across the court, the sky, the trees, the sounds of other games on other courts. It's a microcosm of life with pretty simple rules and yet with infinite possibilities. Yes, I'm moving around a little and that's nice. But, more importantly, it's almost like two hours of meditation. Sure we talk on changeovers of family and errands and all the things outside this space. But during the game one confines oneself to calling the score, apologizing for a bad shot and complimenting someone else's efforts.

Tennis is a comfortable time for me. A special place impervious to what else is going on. When we have a rain out or can't play due to a holiday or because we can't get a foursome, I'm not that disappointed. A break in routine is nice. But once I'm on the court I'm very present in those moments and it feels fantastic.
Posted by LB at 8:03 AM