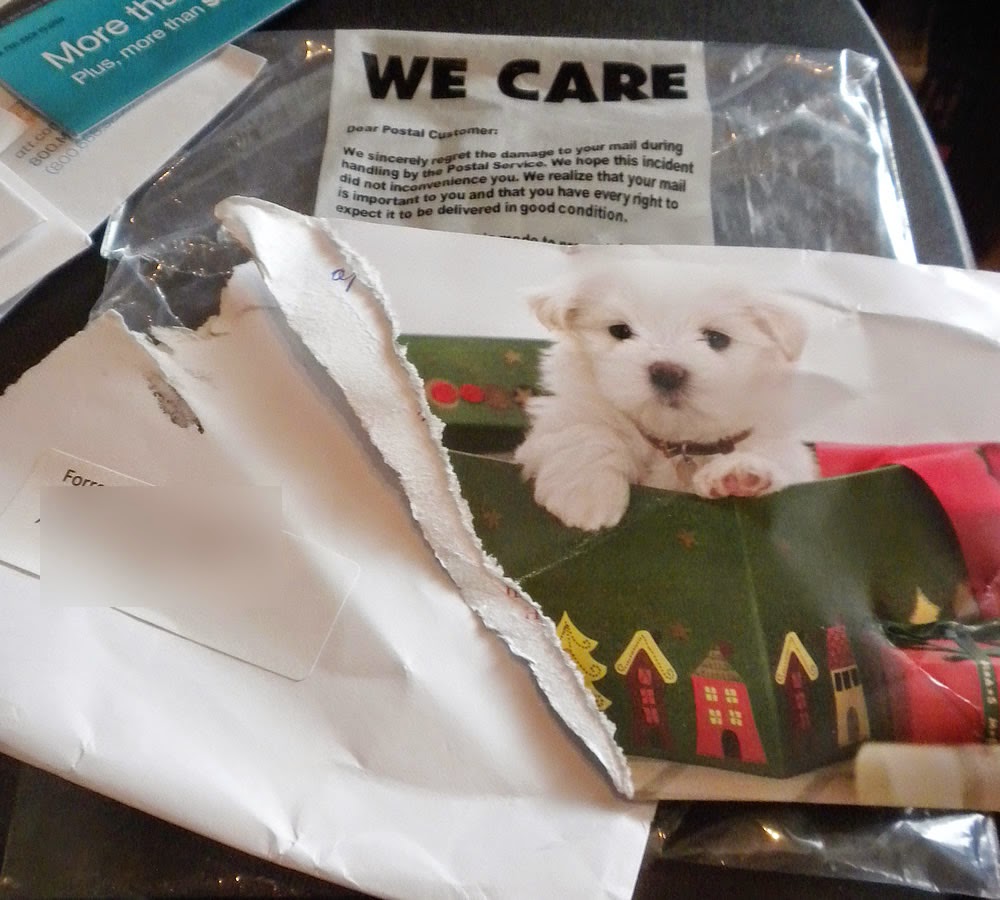 Yesterday we received a portion of a Christmas card in a plastic bag with apologies from the P.O. for mangling it. The return address was apparently in the upper left hand corner of the envelope which was completely missing! Inside part of a personal note was visible: "...hope to see you soon." The cards were pre-printed apparently with first names. It had the last two letters of a name and a woman's name: Mary Ann.

FFP and I discussed it. We decided it was most likely from a couple who always sent a card printed with their names. He even thought the hand-writing looked like hers. I commented that they had sent a religious card every year we had exchanged them. This one with the puppy was, sort of inexplicably, from National Geographic. I decided it must be from this couple, was confident that they hadn't moved and so I wrote them a note as I have been for all the cards I receive. We had a laugh about it.

Later in the day we went to a Boxing Day party. The guys giving it had sent us a card early on and gotten one in return that I made by hand using cancelled Christmas stamps. They had commented later when we bumped into them that they had received it and liked my note (which mentioned their elderly little dog prominently featured on their card). At their house they were displaying the cards they received (yes, I saw my handmade one) and I mentioned almost being thwarted in answering the ones I received by the post office fail. I said I was just sure it was this couple, but that the card not being religious threw me off. One of the guys retrieved their card from the same couple. The printed signature was the same as the part on mine and the card wasn't the same but did say National Geographic on the back and had a pet picture. There was no personal jotting. We had a laugh about that. Maybe we 'rate' with this couple in a way they don't? Or maybe it's just that I always jot something on the cards even if it's just 'Happy Holidays...LB & FFP' so they responded to that habit of mine in years past. The guys had cards on several surfaces around the house. They'd gotten well over a hundred. They told me they send 350 and it was their time of the year to reach out to people. ("It's our one touch of the year with some," one said.) Yikes. I could do that but even when I send to people preemptively I have gotten to the place where I send about 125-150, knowing that only about a third or a half will send me a card. But this is the first year that I've actually gotten about 1/2 a card! After the New Year I'll take a survey of the ones we receive perhaps and publish it (see this one from two years ago).
Posted by LB at 8:45 AM