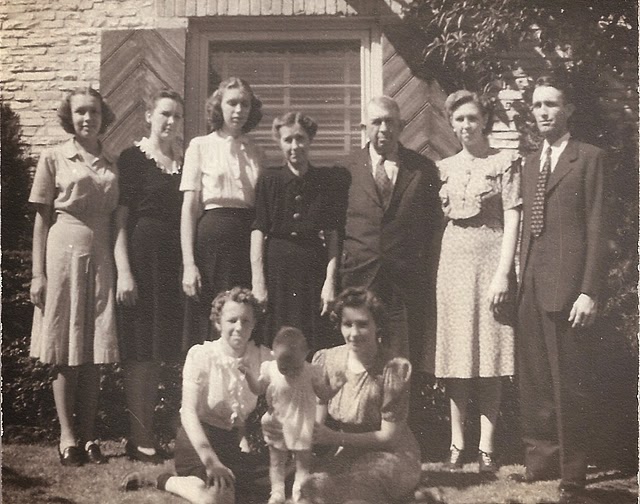 Dad's family 1944. Only his brother is missing. I think that may be because he was away in the Navy. This is during WWII, of course. My dad was rejected for conscription a few times for health. Eventually they took him, though. Except for his brother (who was not yet married) this is his family. I wonder if the picture was taken to send to his brother. None of the sisters are married at this time. His youngest sister, on the ground with my mother and infant sister, is no more than 14.

I have quite a collection of pictures (scanned from prints and originally digital) on my computer and various backup drives. I have several computers on my desk (don't ask) and when they are on they frequently go into screen saver mode and I have them flashing up pictures from a few collections.

When I look at old pictures I can't help but think about how much time has passed and how many people have passed with time. If I see the picture above I immediately think: they are all gone except that baby and teenager. The baby is now my almost 71-year-old sister. The teenager is my Aunt Cappy, featured yesterday. Only my granddad didn't survive to be in my life. But my grandmother, Dad, Mom and the other four sisters are gone now, too.

This tendency of mine to look at who has been lost in pictures as they flash by doesn't feel morbid. It feels like celebrating lives lived and the struggle inherent in life. Let's see...there's a picture of my friend Al on the beach at Normandy, my mother with a snowman, two of our dogs (they are gone, too), my mom with us on the Capitol steps when we are children, my Aunts Mary and Dottie at my sister's wedding in 1965. And there's my friend Charles giving me a hug, So recognizable in these pictures on my screens but no longer in the world. Does this make me sad? No just nostalgic and maybe accepting that one is just a pawn in a long sputtering line of humanity trying hard to stop time but failing. Always eventually succumbing.
Posted by LB at 12:22 PM