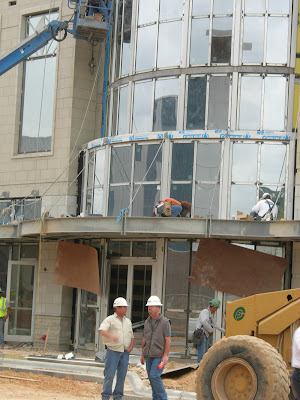 No, I'm not missing. But I am feeling a little lost. And this is likely to persist for a while. I remember when I was a small kid, maybe seven and eight. My sister and I had shared a bedroom in this little two bedroom house we had. There was a tiny screen porch, though, and it had been weathered in and my grandmother and mother were fixing it up as a room for me. They'd moved in a twin bed. There wasn't much room for anything else except there was a closet. Maybe they'd moved in a chest and a lamp or something. Anyway, they were trying to fix it up and I was impatient and wanted them to get out of my room. I wanted to have my space fixed up and use it and be alone in it. I've been feeling a similar way for a while. With the fix up that's going on and the ongoing mess and trying to move to FFP's office, organize a new computing environment, etc. I sometimes feel that I just want some space, fixed the way I want and to be free to be alone in it. Alone means just me or me and FFP. I never feel he's crowding me. We can be alone together is one reason we got married and stayed married.

The picture? It is the construction going on yesterday at the main lobby entrance to what will be our new home: the 360 Condos. Does it look like it will be ready for a grand opening in a little over a month? Even if this gets done and we get closed in early summer, the chaos will still reign. We will have painting and custom built-in furniture construction in the unit. We will still be trying to empty the behemoth that is our current abode. One day, all downsized and decorated, I hope to take a breah and, typing on this little wireless Apple keyboard looking out at downtown, I hope to declare that I have things pretty much ordered the way I want. I hope to be reading books instead of sorting them and managing my finances instead of shredding decades old documents. But you know how that goes...some disturbance comes in from left field and your life is moving toward entropy again. What can you do? Nothing. It's stronger than you are and you just have to make some forward progress to make up a fraction of the inevitable slide.
Posted by Linda Ball at 3:20 PM

Is it the season, or what? I understand the 'at odds with oneself' while making big changes.

My mom has been on a 'justify self-servitude' binge. Nearly six years ago, when we moved here, she gave my daughter a large nightstand and a dresser. They had belonged to my folks, but they no longer had room for them. Now, since my mom has rearranged things after my dad died, she has room for the nightstand and wants it back. Her solution: buy my daughter another one for her birthday. But my daughter is perfectly content with the one she was given! No matter, she got a new nightstand as a birthday gift.

Now my mom has decided she wants to go to NYC one more time 'before she dies'. So, guess what? She has decided to pay for me to go with her for MY birthday gift. So now I'm supposed to arrange the entire trip as my own gift. When I told her I really didn't care to be making all the arrangements she got irritated and said to write up a list of other things if I didn't want NYC.

So how do I tell her she can give me a birthday trip away from her and my daughter?! I feel so nasty thinking that way, but all I seem to do, day in and day out, is solve their problems and do what they want, and try to keep peace.

Oh yeah, that nightstand...unfinished oak...and guess who was elected to do the finish work!

I'll end up giving in, on all counts.