Going Through the Motions 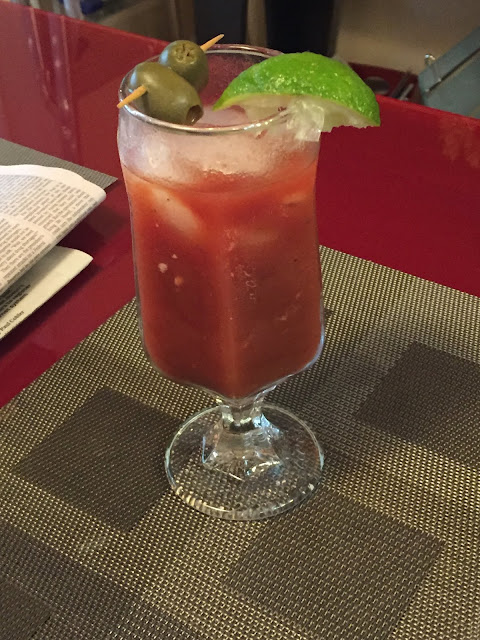 There is something about this holiday gap between Christmas and the New Year that always makes me feel lost. On Christmas Day, I drank two Bloody Marys. Started drinking early, too. I actually don't think I had another drink, but one can't be sure this many days later.

Anyway, I feel lost. Yesterday, I went through my regular routine. I was up a little late (7:30). I had coffee and did the puzzles in The New York Times. (It was Saturday and I conquered them all so that took a while.) I turned the TV on because it's cold outside and I use it to warm up the room. Haven't had the heat on all winter! Put it on BBC News. I read the rest of the Arts section that I found interesting and then almost finished looking at yesterday's papers, save the front page of the NY Times. I got interested in a couple of stories in it and have yet to finish.

We walked across the footbridge to Trader Joe's because I wanted salad for lunch. (I'd already had a taco that FFP got from the Farmer's Market Taco Deli stand.) I didn't have any 'green stuff.' We get a mixture of kale, spinach, and chard called Power to the Greens. Came home with a Fuji apple, a birthday card for my nephew-in-law, some cheese sticks that I'm going to add to the appetizer plate for tonight, a fake chicken in orange sauce frozen thing FFP wanted to try, chicken tenders (actual chicken) for a dish he's going to make tomorrow night, a small baguette, a microwavable Indian Tikka veggie thing I wanted to try, some olive tapenade (for the apps for last night) and five Lemon Luna bars (why five I don't know, FFP added to cart). And, of course, the greens. The total was only $24.94. The bill always seems cheap at Trader Joe's!

I made a salad. The greens, some chopped apple, some broccoli, some raisins, some carrots, shredded cheese, green onions, and Greek Feta dressing. I read a little bit of today's The Wall Street Journal while eating. I put away the food I'd drug out.

Then I sat at my computer. Pondering cash flow to pay my bills, my 'to do' lists and where we stood after the wild week on Wall Street.

I decided I deserved to sit in my chair and read, perhaps to doze.

Around 4p.m. I put together some appetizers for the event last night. I ended up with a lot of choices for what to include and how to combine it. Some endive topped with olive tapenade or Boursin cheese, some celery with pimento cheese, little toasts with paté and a sliver of gherkin, and zucchini topped with Boursin. Something like that. Challenge was figuring out how to get them in something we could walk across the lake on foot with. I managed it and we made it there. We had dinner with food brought by the other couples (much tastier and better thought out), drank wine, watched a show of singers giving tribute to Ella Fitzgerald and Louis Armstrong backed by a number of musicians from the local scene plus a bunch of the Austin Symphony.

Today was cold and rainy. I got out for my lunch with some girlfriends. We chattered about growing old and our various challenges. I ate fried avocado eggs benedict. Which somehow sounded better than it was. I didn't do anything constructive all day. FFP wanted to go out to the restaurant down the street (Fixe Southern House) for dinner. I had a couple of Manhattans with some gumbo and fried chicken and kale salad.

Sloth isn't becoming, but I do it so well. I would make resolutions to do better in 2019, but why? I wouldn't keep them. If I need resolutions, I only need to look back.
Posted by LB at 11:37 PM