First, a random Christmasy photo to celebrate the 'season.' (This was taken at an annual charity garage sale here in August at the beginning of November. They had lots of decorations for sale.) 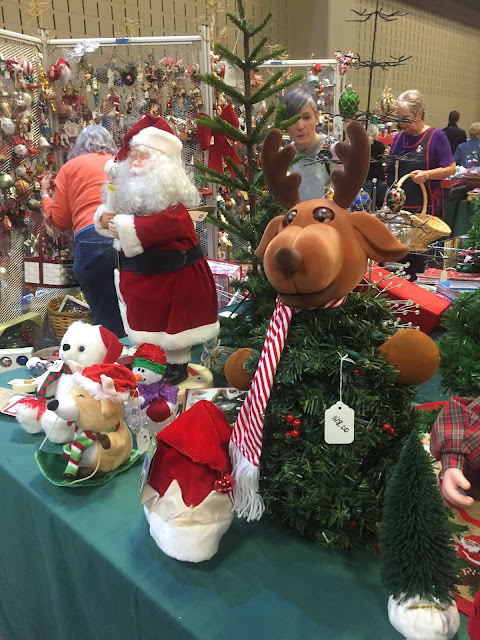 I have written nothing in this space since I completed the last set of Holidailies posts. (This is a portal where people who pledge to write every day from December 1-January 1 post links to their entries.) I wrote about the phrase 'Repetition Brings Reputation' last year about this time as I geared up to write for Holidailies. I won't bore you with that again, but basically, if you want to do something (write) then you need to do lots of it! Right?

I have been considering writing a hypertext memoir. I dream up weird things like this to distract myself from completing anything or really writing. The title of the thing would be 'About 100 Things Concerning About 100 Topics Shaping My Life.' Each paragraph or short vignette would be categorized by one or more of the topics and would allow back and forth navigation between the relevant passages. One could simply read the memoir in a linear order or one could follow threads like 'photos' or 'links' or 'years' or 'beginnings' or 'endings' or 'people' or 'articles of clothing' or 'crosswords' or 'words.' This elaborate project isn't going much of anywhere beyond the 100x100 list which keeps growing. It would be a feat of HTML and thought. And, of course, it will just exist as an imaginary work like several novels and short stories in my head.

I did write one vignette about words the other day (that was also about crosswords): "In today’s (11/26/2018) NYT crossword, there was a clue (amasses?) and the answer was 'hoards' and FFP wanted to put in hordes. (We both do the NYT crossword on M-F by making a copy.) I had thought of using the word horde the other day in describing, I think, a gaggle of my cousin's family who planned to I go out for Mexican food the night before Thanksgiving. (As in 'I think I'll let you and your horde do that and we will have a quiet dinner by ourselves.') This is a most interesting homophone pair. They don't seem to have originated together although one could make a case that they could have. I looked both up in my old American Heritage Dictionary. Something I used to do quite often before the miracle of the Internet. I miss the serendipity of what else happened to be on the page where you were looking. 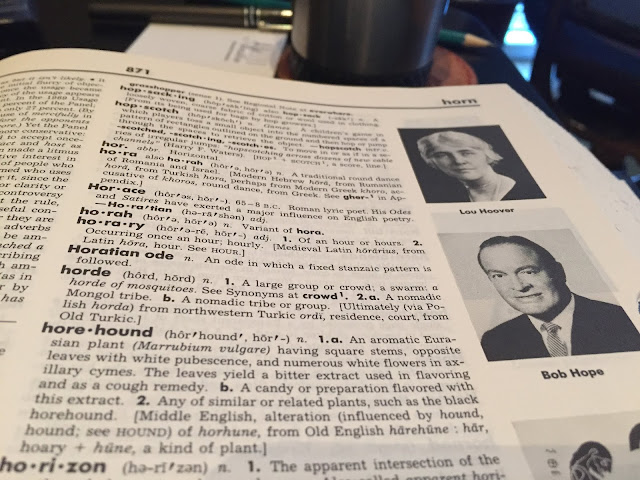 Horace was an answer in today's NYT puzzle, a Saturday that I couldn't quite finish. It was clued as 'Roman who wrote "Whatever advice you give, be brief!"'

Anyway, I'm not good at brevity or getting to a point. But I'll be writing and rambling along for thirty-one more scintillating entries!

Come along. And read better stuff at holidailies.org,