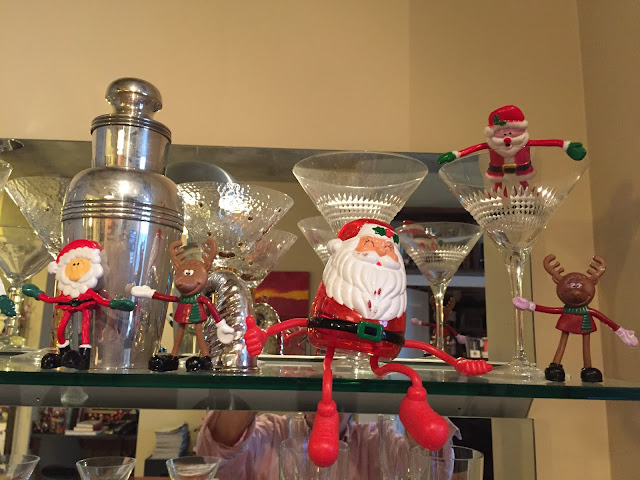 I've got all the decorations sitting around. We've gotten thirty-four cards (from families, I don't count ones from charities or businesses). I sent 94. It's a losing game from that point of view.

We have two parties tomorrow. On Saturday a party (albeit an engagement party, it's at a venue that will be decorated to the nines for Christmas) and a show at a club where we'll meet up with some friends. (We've been doing a lot of friend meet-ups and it's been a lot of fun.) On Sunday, another party. One that always has the best entertainment and food. On Christmas Eve we are going to a restaurant we've been going to for forty years with a friend. It's interior Mexican. We'll have some tamales for sure. Christmas Day, we'll probably spend watching videos, reading and eating leftovers. Then there is a Boxing Day (December 26) party. We are having one or two friends over on the 27th for a showing of our favorite movie to watch at Christmas (great Christmas scene in it, too), "Giant." I'll meet up with some long-time girlfriends on the 28th for tea. Then on the 29th, we will go to one of those pop concerts where everyone brings food. Winding up the season, we will take a couple of girlfriends to an early dinner at a downtown club on New Year's Eve and then fall asleep before 2019.

We haven't really gotten each other gifts or gifts for anyone else except the occasional bottle of wine to a host. I did order myself a calendar on Amazon and the husband bought a 2019 datebook at the bookstore when I got a book I wanted.

I would like to be invited to a White Elephant party. I think these are hilarious and fun. Gift-wrapping some stupid (or even nice) thing you don't want and then having an exchange. Does anybody do those things any longer? Well, I miss them.

So the holidays draw to a close. Then it's just tax season and a new year to waste. Sigh.
Posted by LB at 8:06 PM