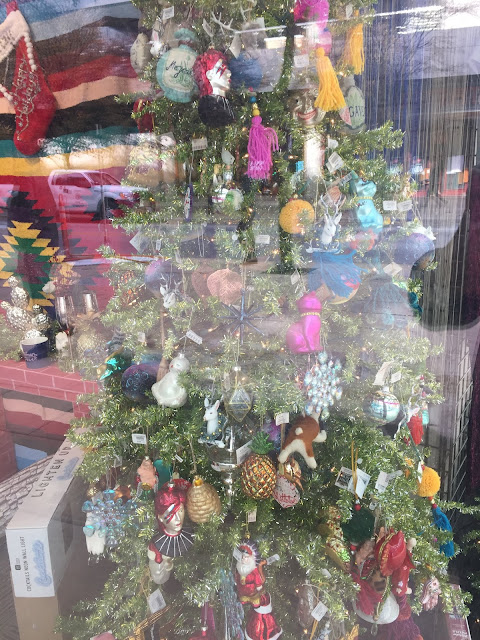 This tree has a weird assortment of stuff on it. It was in a shop on 2nd Street methinks.

My apartment is still decorated. After all, we have one and only one guest during this time period and she is coming tonight. We are watching 'Giant' and eating barbacoa tacos and drinking bourbon. Well, maybe wine. 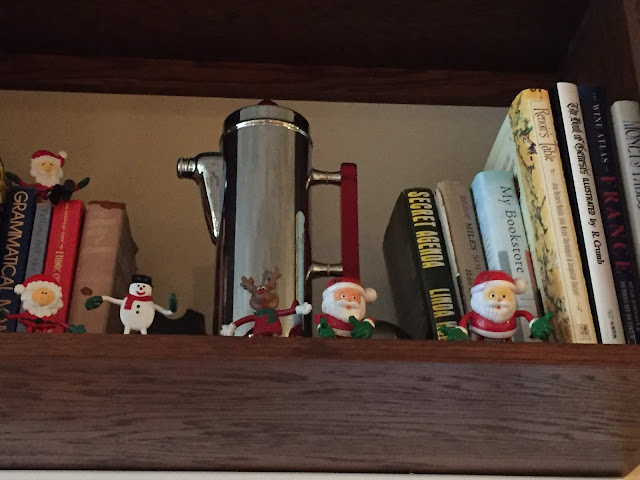 Anyway, I'm going to shower shortly and go get my last haircut from Jane the Barber who has been cutting my hair for twenty-five years or so. She is retiring. Which is only fitting since she's a couple of years older than I am. I will find a new person to cut my hair. Hopefully, I will find a closer place. Maybe one that I can walk to. Jane was only about a mile from my old house. Then she moved further north and I moved downtown. It's now an 8.5-mile car trip. I have gotten appointments at times of the day when the traffic wouldn't be too bad, but closer would be better. I'm considering a friend who is a stylist and is 3.5 miles away. But there are walkable barber shops and stylists downtown. I can walk to my dentist. I can walk to doctors and clinics (although I never go to doctors if I can help it). I have to drive a few miles to the Optometry place I go to once a year. But it's only about four miles away. Is my world getting smaller? Yep. I hate to drive places. I do drive myself about five miles (each way) to play tennis. We make bigger car trips, of course, and even road trips, but in the husband's car and with him driving usually.

I quit typing here and went about my life.

Yep. I have a short haircut. The last one from Jane the Barber. I'm not much on style and grooming. I like my wash and go haircut although I've always liked it in between the cut she gives (too short on top) and the shaggy, in-need-of-a-haircut mess I usually have before I get another. Sigh.

I didn't post this yesterday. We tidied the apartment in a desultory way. We had our friend over to watch 'Giant' and eat tacos. (We included barbacoa as a choice as I said above. Does anyone know the movie?) We drank some wine she brought. I was in bed earlier than usual and now I'm up a little earlier than usual. I woke up worrying about my end of the year obligations to the tax man. And, also, for some reason what those giant, fat disks with movies on them were called. The ones as big as an LP but thicker. Laser disks, it came to me later. Oh, the failed technology. (And, why was I thinking about that?)

And so it goes. As my dad used to say: "There's always something to take the joy out of life."
Posted by LB at 6:59 AM