Health and Hope, My Medical Nihilism 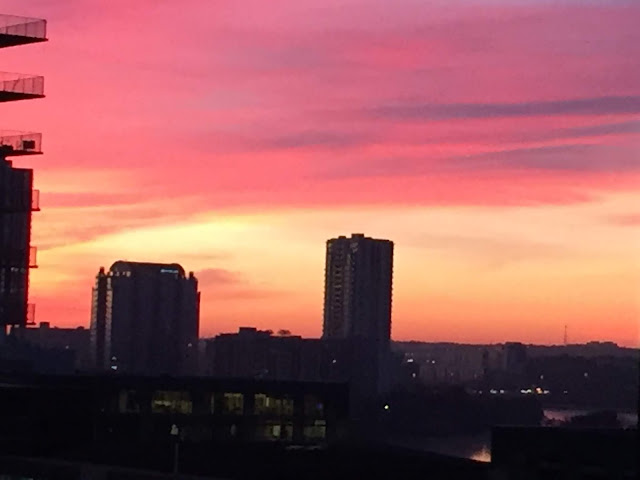 This is a recent sunrise from our apartment, zoomed in from the balcony to the Rainey Street area. Our views keep getting more and more restricted. So it goes. Things change. But if you live another day you will see the effects of us spinning toward the sun in a daily event we call sunrise but which we all know if just us spinning around old Sol.

I am a medical nihilist. I learned this from one of the last doctors I saw regularly. I was describing how, generally, I felt things would get better on their own or, if not, that the diagnosis and proper and effective treatment was a pipe dream. He said they learned of such patients in medical school and they were called 'medical nihilists.'

I know how this attitude came about.

When I was about ten, scaly red patches that had some 'structure' (seeming to go into layers of the dermis) appeared on my body and scalp. My dad took me to a doctor who correctly diagnosed this as psoriasis. I learned to spell it. I learned that there was really no cure, only treatments. Pine tar baths. UV. I was actually treated to an intense sunlamp in a clinic with the nurses carefully exposing specific areas of skin for timed minutes. If I got one of those beach sunburns that we did in the 1960s, lesions would magically disappear, the only evidence being an unburned circle of skin. (You are thinking skin cancer, I bet. Maybe I have it. Hasn't been diagnosed.) So I had something that wasn't going to kill me but wouldn't go away except when you hurt yourself. I'm 70 and neither disease nor cure has killed me.

When I reached puberty and started having periods I felt the worst most unrelenting pain I'd ever felt. My mother took me to doctors. Not when I was in pain, mind you, that would be gross to visit a doctor while bleeding. The doctors (male and female alike) assured me that it was 'normal' or 'all in my mind.' I remember telling one female doctor that I bought OTC pain meds and abused them by taking lots more than the directions said was safe. That was OK, she said. I suffered monthly. I used heating pads and pain meds. Noone really cared except for my mother and sister. They seemed to feel helpless. After college when I was working I was living temporarily with my parents. One Saturday I got up and was going to Denton to see some friends. (I went to college there.) I felt weird. I wasn't having my period, but I had a little abdominal pain. Not as bad as a period. But I had this weird feeling that something was in my gut tugging on my insides. If I'd been having a period, I'm sure I would have thought nothing of the pain or feeling. My mother worried I had appendicitis when I described the pain on the right side. She drove me to a nearby osteopathic hospital instead of letting me go see my friends. The doctor on duty pressed his fingers into the right side of my abdomen and released quickly. This is apparently a time-honored way to diagnose an infected appendix. It did hurt. Then I think they took blood, saw a high white blood count and took an Xray. After the Xray, the doctor stopped them prepping me and rushed me to an operating room. His distress was apparently palpable because my mother became distressed. I had been given a sedative preparatory to anesthetic and, being very susceptible, was out of it. I believe the surgeon thought my appendix was ruptured. He did an abdominal exploratory and discovered not a rupture but an outsized ovary, an infected appendix and many adhesions attaching to stomach, intestines, abdominal wall, etc. He believed it was endometriosis, a condition where endometrium tissue appears in some other place than the lining of the uterus. But he sent some of the tissue from the removed ovary and adhesions to a lab for testing. My mother was distraught, certain it was cancer. She finally found my dad and he sat up all night with me. It isn't pleasant to have such surgery without advance notice not to eat or drink. But, yes, all my pain in the past? It was real. But it was only diagnosed when my appendix became infected, perhaps incidentally, perhaps because of the monthly internal bleeding and sloughing into my abdomen. It wasn't cancer. At least this was curable (get rid of the misplaced tissue, which the surgeon did amazingly well apparently). But what a way to finally get a diagnosis. I had never heard of the condition. I later learned that it often kills people with bowel obstruction and other things.

Something will kill me. Maybe the flu. Although I get a flu shot these days in spite of my nihilism. I do it for the 'herd' hoping that mine and others vaccinations will save other people. Maybe a heart attack. Maybe a stroke. (My sister had a hemorraghic stroke when she was 55. This is a genetic weakness of a vessel, aneurysm, in the brain that ruptures or leaks. My mother acquired a mysterious convulsive condition at 55 and I wondered if she had an aneurysm that just never burst. I was glad to glide by 55 without either condition.) Maybe I'll get cancer. My dad had prostate cancer. The treatment nearly killed him years later. He was diagnosed in the heydey of the PSA test. They biopsied multiple times to find a small cancerous tumor. Today it might not be treated. The radiation scarred him so that years later he started to bleed to death from it. My mother died from Multiple Myeloma. After a few years of frustrating misdiagnosis and treatment of my mother as a someone who had psychosomatic illnesses (sometimes by the family), she was diagnosed at stage four. I'd never heard of the disease. It finished killing her in three months. She never got to come home from the hospital. At the time this cancer was a certain death sentence, essentially incurable and barely treatable. A forgotten blood cancer. Things have changed some in the last sixteen years, but it's still not pretty. It's hard to see how my mother's 'care' really helped her.

So, yeah, something will kill me. But I mostly eschew drugs and tests and doctors. Oh, I might discover something 'early' and survive instead of succumbing. But really, I am happy to be 70 and not suffering that much. I can still walk good distances. I need to lose weight and exercise more and eat better foods. But you can't really cure old age. I wonder what my end will be like. Through the lens of social media and the experience of close friends and family, I see many endings. Dementia, stroke, heart attack, accident, cancer. One friend has survived Multiple Myeloma for twelve years albeit with all kinds of invasive and debilitating treatments. I have friends with ALS and MS diagnoses. Another friend with a recent Multiple Myeloma diagnosis. I lost count of the people I know who've been treated for breast cancer. My husband had a diagnosis and treatment for a rare cancer, sebaceous cell carcinoma. He was very lucky. But...it was not caught early and rather misdiagnosed for over two years.

I'm sure I'll pay a price for my casual attitude toward the wonders of medicine. I'm not anti-science. All the rest of you should get tested for everything, take statins, etc. etc. (And get a flu shot for heaven's sake.) I'm the control group. Some of us have to get old without all that intervention. My first goal was 70. Now I'm looking at 75, which, really is enough for anyone. I'm just hoping to avoid dementia so I can appreciate my victory!
Posted by LB at 10:46 AM