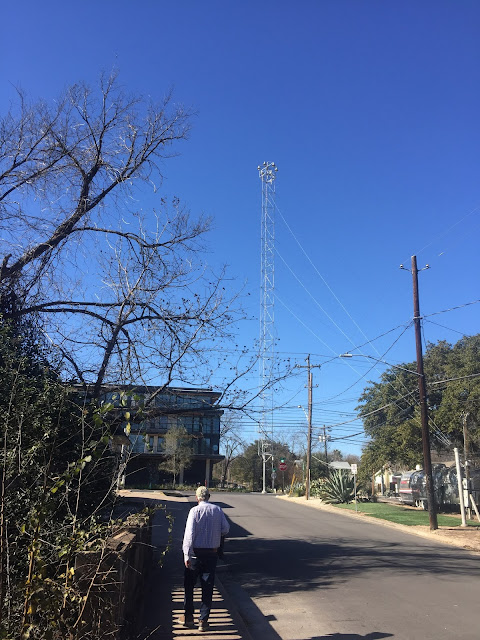 I gave myself a day off. To do whatever I wanted, when I wanted. I didn't post on this blog. I answered some emails. We took our walk as usual. That's my hubby strolling along on a street leading to South First where there is a Moonlight Tower. We walked about two and a half miles, part of it on a shopping street on South Congress we would usually avoid this time of year leading up to Christmas but especially now while trying to social distance.

I ate leftovers. And cheese and crackers. Breakfast was banana 'pancakes' (really banana and eggs cooked up like pancakes) and bacon. I had candy and cookies. A late snack of half a salami and cheese sandwich. And a cocktail. Manhattan on the rocks with High West Rendevous Rye.

I put maybe three pieces in the jigsaw puzzle. I read papers and worked puzzles in them. We watched part of WW84. Meh. We watched a couple of episodes of "Bridgerton." It's no Downton Abbey or maybe it's just a different time. We watched an old Cary Grant movie called "The Holiday." It was amazing. Directed by George Cukor. With Katherine Hepburn. Cary and Katherine do some gymnastics. There is a New Year's Eve party if you need a holiday hook. (We watched on Criterion.) We watched some NYPD Blue.

I plan to be productive today. No really. I don't feel bad about missing a day of Holidailies because doing whatever I wanted felt good. For a while. I want to feel like I accomplished things at the end of today.