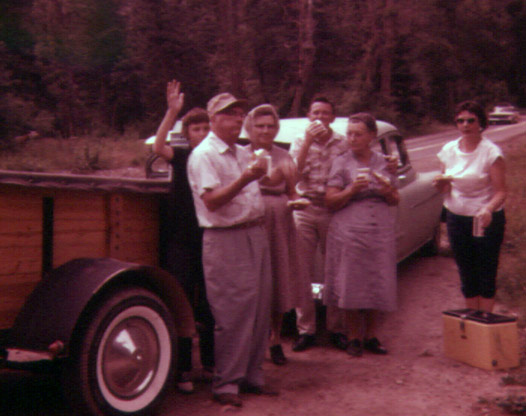 I have been entertaining others (well, so I say) and entertaining myself with Facebook during the 262 days of this madness called semi-isolation. So when I realized Holidailies was happening I decided that I could just trade off the Facebook posts and quickly post something every day in this blog. No problem. For the last few weeks, I've been putting up certain types of images on certain days. Monday has been Museums and sometimes Murals. Tuesday an image from a trip. (Remember trips?) Wednesday? On the Water. Thursday is ye olde Throwback Thursday. Friday is food. Usually a restaurant shot. (Rember eating in restaurants, laughing and talking with friends?) Saturday is Strangers and Shopping. So, today, Tuesday, I pulled up a picture from over five decades ago. Me (waving) and some relatives on the move! Here's what I had to say about it on Facebook:

Tuesday. It's a trip. Long, long ago the only trips I got to take were car trips, often camping expeditions, usually meeting up with gaggles of relatives. (My first plane ride was the summer I graduated from high school.) Any photos made on these trips reminded one of Okies fleeing the dust bowl. (We were often just Texans fleeing summer heat.) These trips involved very few restaurants and almost no motels. (Occasionally we slept at a relative's home, usually on the floor.) There wasn't any fancy camping equipment (no cold weather sleeping bags for the campground at 9K feet, just a bedroll of a sheet and a quilt you made up at home). For all the limits on my wanderlust as a kid, FFP tells me that he had it much worse...never getting out of Texas until he was in his early twenties. (His mom never left the state in her life and he thinks his dad might have gone to Mexico once.)
I don't remember this trip, but there I am waving behind my great aunt and uncle who lived in Slaton. My mom stands over the cooler that had obviously provided sandwiches and drinks for a roadside lunch. The woman next to my mom is my sainted grandmother, Ruby Leverett DeArmond, aka Mama Dee, Deedy. The young fellow is a second or third cousin. I don't know who took the picture and shudder to think about what is in the overloaded trailer. Finding this shot made me want to track down the distant cousin (couldn't do it) and find a picture of the pickup my dad used to haul cattle that he made into a camper.

Now, I've also been taking walks around Austin neighborhoods and posting a dozen or more pictures on Facebook. Here's one from yesterday. I take note of unusual fences. First-ever tire fence! 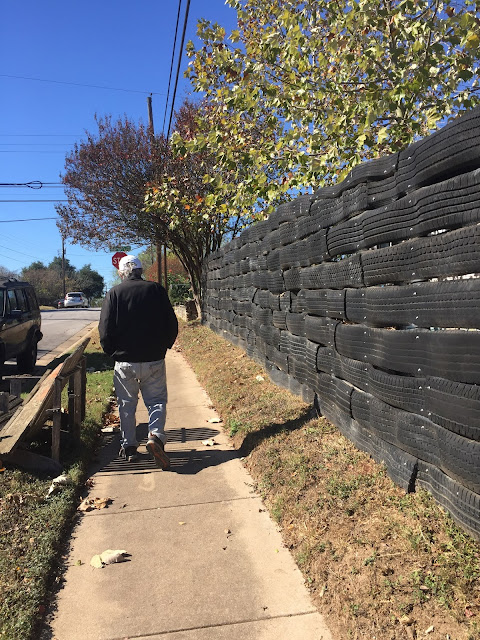