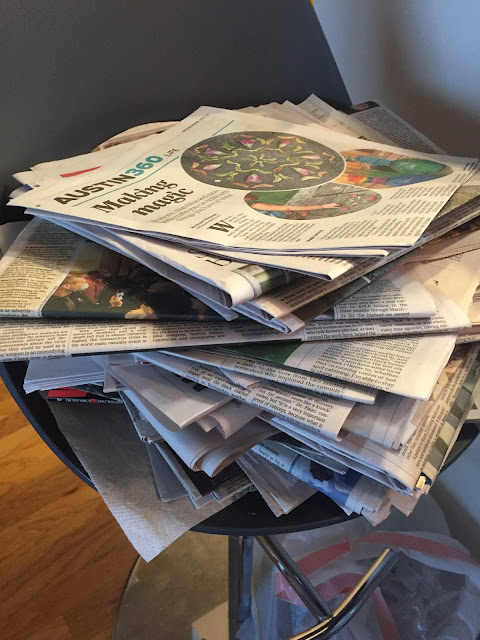 They pile up. I am loath to toss them into the recycling bag until I've glanced at them. If a section contains a crossword I haven't worked, I feel compelled to try to fill it in or cut it out for later. At the beginning of the plague time, I would cut them out, thinking that if times got hard the newspapers would stop printing and no more puzzles. Yeah, that hasn't happened. I suppose we could run out of money to subscribe to these tree killers. But that probably won't happen either.

We get The New York Times, The Wall Street Journal, and The Austin American-Statesman. (I'm not even going to talk about the magazines we get including the 50 or so times a year The New Yorker.)

Eventually, they find their way into recycling. Sacks and sacks of them. But not before I've actually read a few articles completely, read a lot of headlines, made notes of entertainment we should see. I always look at the Obits. Not just to see the lives of people, but I like to see the cause of death. And, yeah, complications of COVID-19 is one we now see. The New York Times even has a feature about these deaths.

I have been collecting links to articles during the plague. A lot of them are about the virus. At least peripherally. This week there was an article in the NY Times about a shortage of, wait for it, antacids!

By the way, I didn't write yesterday in the blog. Maybe I'll write more today. My excuse? I was trying to read and get rid of some of the newspapers!