Almost Done with The Holidays 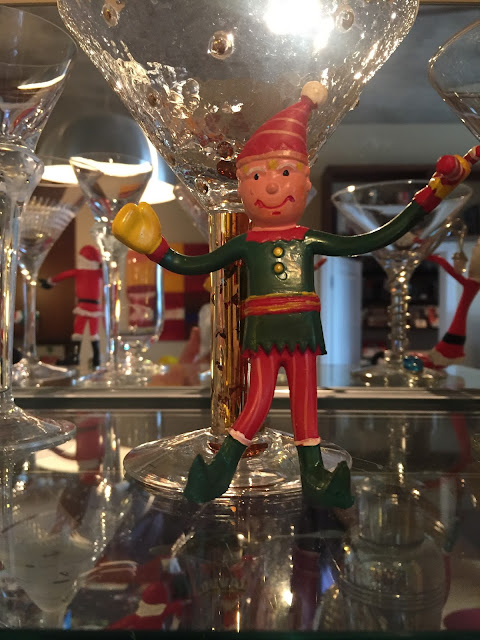 Soon I'll try to gather all the Christmas characters up from their places on the apartment shelves and I'll take down the displayed Christmas cards. (By the way, I ended up sending 81 cards and receiving 42, not counting businesses and charities.) Some cards will go into recycling, along with family letters and such. I'll save a few with the Christmas things. The tiny tree will go into a box along with the tiny 'ornaments' (really little tiny rubber critters and such). 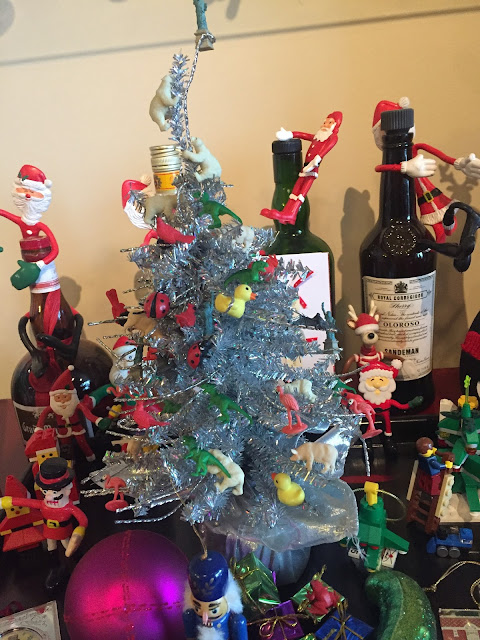 The puzzle is disassembled and in the box. Although I did leave as many pieces intact as possible since someone expressed a desire to own it and frame it "in the Beatles room." Ah, collectors. 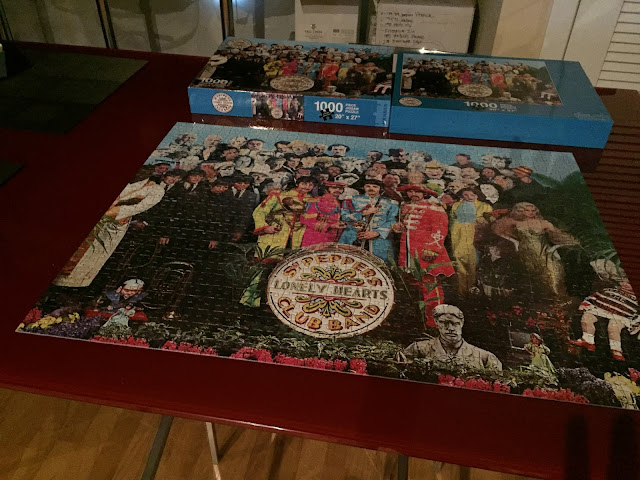 Now just have to get it to them so it isn't taking up space in our abode.

I have already started on my end of year tax and financial duties. That taints the holidays for me, but I feel worse if I don't get started on it.

We have dinner at an old favorite restaurant tonight with a friend. Fonda San Miguel in our old neighborhood has been the scene of many a great meal, serious libations, and great conversation. We'll visit with the owner tonight we hope. Tomorrow night is the eve of New Year's Eve. Some friends have claimed the day as a party. Weather permitting we'll walk to Rainey Street for that one. New Year's Eve we will entertain a friend at our downtown club for some drinks, apps, dinner, and music before coming home a few hours before 2018. On New Year's Day, we plan to go to one of those New Year's Day come and go parties. We were invited to two, but rather than try to make both we will only go to the first one. We used to have one at our house long ago. Bloody Marys, blackeyed peas, sausage, other snacks. I used to have a guestbook and also this book we trotted out for this party where people wrote resolutions, predictions, hopes, and dreams. I wish I could find those. I bet they are stuck in some box in the storage cage.

But, then, it will be Tuesday. Life will be back to normal. Won't it? I'll be adding taxes to my usual duties. I'll be planning a trip to New Orleans and maybe New York and some other places in the Northeast. And another year will rush by. I used to visualize the year's calendar as an almost oval that was sort of wide and flat on the bottom (that was the three months of summer) and a little flat at the top (the weeks of the holidays). The months unfolded counter-clockwise from the top. This made January through Spring sort of a plunge downwards. Still seems right to me somehow.
Posted by LB at 1:51 PM