I Wish I'd Paid More Attention to Mythology 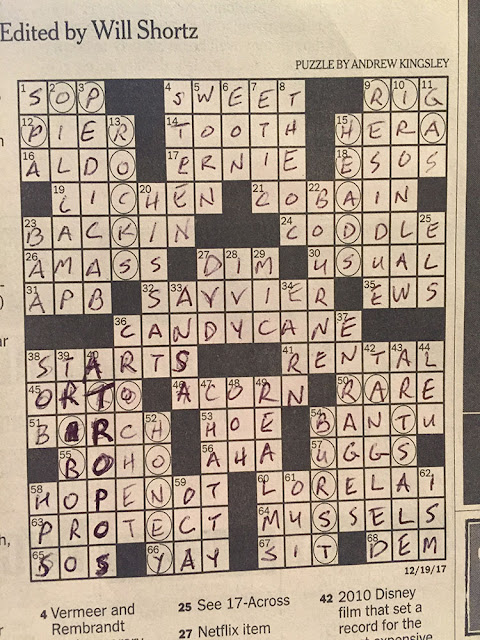 I am attacking my problem with sloth. It was next in line after gluttony. I think I conquered that in the last few weeks. (Oddly, I do better with my eating and drinking during the holidays than other times.) However, I still allow myself to work the crossword and Ken-Ken in The New York Times before I do much of anything else but make coffee in the morning. In today's crossword, there was a 40-down answer 'Atropos' which was clued 'Fate Who Cuts the Thread of Life.' I did not know this. It's Tuesday and I expect a little easier ride. Plus every time there is a question about Greek mythology, I think of a little drama from a Junior High English class. We were studying all these myths and there was to be a test. I thought it was a very useless study. After all, these were silly beliefs of the ancients. I liked that teacher, and if I'd realized how much that study would matter vis-a-vis word origins (I loved words) and literary tropes (I was starting to love literature) I would have been happy to learn it. I flunked the test, but the teacher, who also liked me, I think, told my mother to make me study it and retake the thing. I got a better grade. But there was a block there still to retaining stuff about these myths. Now I wish I'd learned it all much as I wish I'd learned the Christian Bible, the myths of my own tribe. And not just to do Crosswords and excel at home yelling at Jeopardy. I really think it's useful to know what people once believed and, for that matter, what they believe now. I tell myself I'm going to read the King James Bible and Bullfinch's Mythology. But I probably won't do it. By the way, the Roman equivalent of this Fate is Morta.

And while I'm off on this tangent I remember this same teacher giving us an assignment to make a poetry notebook. We were supposed to copy poems out of various anthologies she made available. I didn't mind doing this one so much and typed up my notebook very neatly, carefully selecting the poems.  But I couldn't resist putting a unique touch on it and the last one in my notebook was this:


Crowds may cheer
But never fear
They also jeer
And rarely hear what is intended
Or recommended
These uncivilized masses
English classes.