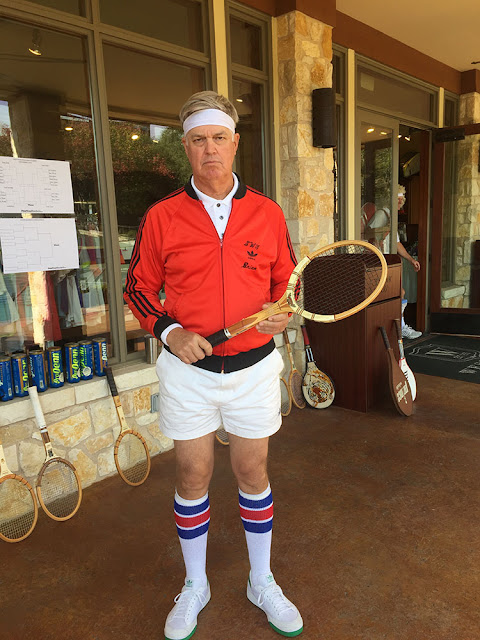 Yes, I know it's Holidailies and I have to eventually get around to writing about the season. But I've been wanting to write about tennis for a while. And I played today so I thought it would be a good time to write about it. I didn't wear throwback tennis wear or play with a wooden racquet but there was a wooden racquet tournament going on so I snapped this picture of our head pro at my club dressed and equipped for the occasion.

I play three days a week usually. Tuesday, Thursday, and Saturday. Usually from 9 until we finish three social sets. The constant companion in these games (she usually misses only two or three times a year) is an 86-year-old woman. We play social doubles according to rules she's established. Over the years I've played other social games (singles and doubles) and casual leagues. I enjoy watching tennis. I like to read about tennis and have a small collection of classic books on the subject. 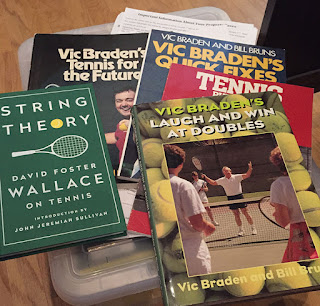 I also like to occasionally reread a John McPhee two-article from the New Yorker, published in 1969 about Arthur Ashe and Clark Graebner called "Levels of the Game." It was also published as a book which I don't believe I own. Maybe I should own it. (And, by the way, David Foster Wallace's annotated copy of McPhee's book is housed at the Harry Ransom Center at UT.)

I restrict myself to watching mostly Grand Slams on TV. But I do watch many hours during these four two-week periods. I'm happy to take a vacation and skip tennis while gone. But it is something I wouldn't like to give up entirely. Playing these regular games gets me out of the apartment, outside and moving a bit. (I wouldn't really call it exercise. But I try to trot after the ball both when it's in play and not. And there is at least some bending and stretching.) I enjoy looking at the sky, observing the weather. (Something I also enjoy during walks, another favorite activity.) I enjoy seeing glimpses of activity around the courts, seeing an occasional hawk fly by or peacocks wandering from a nearby park. I enjoy observing the foibles of the ladies who play with me, both to win points against them (Don't like your backhand? I'll try to hit to it.) and just to observe their habits. There are the ladies who always foot fault (we give that a pass in our games). There is the lady that stands mere inches from the service court when her partner is receiving. On changeovers, I enjoy hearing about things I don't have in my life. Children, Bridge, mahjong, debutante dances, Sorority and Fraternity activities. The latter two are for the kids as well. We don't play with really young people. We play with some ladies younger than I by around twenty years, though.

Tennis, as casual as my play and attention to the sport is, remains one of my favorite activities. I hope I never have to give it up.
Posted by LB at 1:13 PM