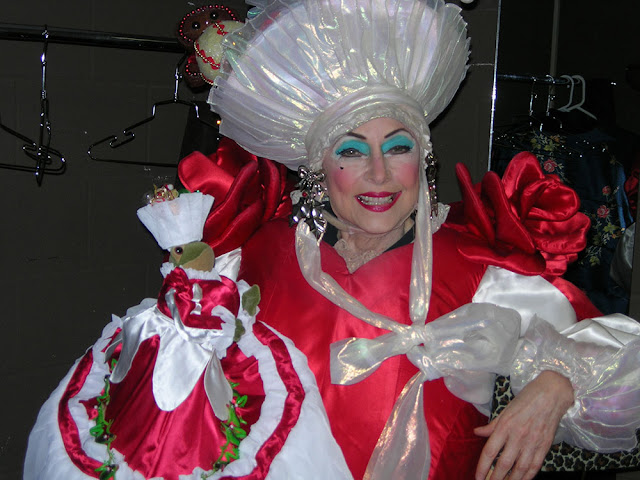 Since we (especially FFP) have been involved with Ballet Austin for about twenty years we now have a tradition of seeing their production of "The Nutcracker" each year. It's very festive what with the party scene, the snow scene and the music that screams Christmas because it's on every other car and jewelry commercial (and, really, is delightful music). FFP saw many of the productions from the wings in his years as a VIP Mother Ginger wrangler.

The picture above is from 2005 and is Karen Kuykendall dressing up as a VIP Mother Ginger. (May this Austin Legend rest in peace.) New costumes were purchased a few years ago so the costume has changed. Tonight FFP will don the new costume and ride the skirt portion on stage, propelled by stagehands and with children dressed as bonbons lurking underneath. The bonbons will emerge, he will try to upstage them with his 'moves' (but their proud relatives in the audience will ignore him) and he will be wheeled off. He's done a turn on the skirt twice before (albeit with the old costume). During his VIP wrangling days, one didn't show up, pressing him into service when I wasn't there. One time he did it in a dress rehearsal for some reason. Anyway, I'll be there for his triumph tonight with some good friends. The ballet and the music and all the little kids in the production and in the audience in their Christmas outfits will make it seem like Christmas. Won't it? He is sitting on the other side of the office now watching people do moves on the skirt.
Posted by LB at 3:07 PM