...temple? Uh, no, I don't think so. I abuse it with fatty food, salty food, alcohol. I don't smoke anything, though. Haven't in years and years. I used to do all the medical paperwork for my dad in the last years of his life. Sometimes they would ask: "Have you ever smoked?" I would mark 'yes' and then for 'year quit' put 1945.

No, my body is a laboratory. As is yours. It is a small clinical trial of one participant lasting for, well, however long it lasts.

I have become aware of this especially since I retired and since I have long passed menopause.

I am a medical nihilist. The last gynecologist I had that I really liked (he retired) told me this was what I was called. I resist admitting anything is wrong that won't improve (or at least stabilize) and not kill me.I resist medicine. I take the occasional Phenylephrine or Diphenhydramine. In as small a dose as possible. To fight off the allergies. I had a flu shot this year. Not for myself, but because I have read enough to think that I owe it to the rest of you who aren't in my clinical trial. The herd effect. I don't take any supplements or vitamins. I don't really avoid or swear by particular foods. (I am doing a small experiment not eating anything with chickpeas at the moment, however.)

Some of my aversion to medicine, doctors, and hospitals comes from only having two disorders in my life of any significance. One with no real cure but no life-threatening consequences either; and one with possibly life-threatening consequences that was misdiagnosed over and over. Then, of course, there was my mother's final illness, misdiagnosed (or ignored) for a few years but hopeless in any case. And, oh the hours I spent with my dad trying to get a bleeding disorder straightened out that might have been caused by over-treatment of prostate cancer many years before. All those hours around doctors' offices and hospitals, even if for someone else, ought to count for paying attention to health care. And the 2010-2015 journey with my husband through some scary health stuff ought to earn me a 'get out of jail free' card for having to do stuff for myself.

I sometimes get aches and pains that I can't quite explain. I don't often get a diagnosis unless it's from the Web. I just wait for it to go away. Amazingly, it often does. I've had injured knees and worn various drug store braces for weeks or months on the tennis court. I've had painful hands for about fifty years. Not always but occasionally returning and plaguing me for weeks. I've had digestive distress that always righted itself, often without a single OTC drug. The surgery for the one disorder that almost did me in left scar tissue in my gut. I sometimes that this gives me difficulty if I stress too much.

So I run my little one-person lab to see just how long this particular person with my unique physiology can march along upright. I also conduct little observations of body weight, general health, etc. along the way. Trying to match up what's eaten and what expended, examining my mental motivation about food and my particular body status. Observing what hurts and what doesn't.

All this data means nothing to you, of course, or anyone else. One day the lab will shut down and I'll die or sink into meaningless dementia, observed by others. As they say, 'your mileage will vary.'

I was looking all over for this photo from one of my dad's hospital stays to illustrate this entry. Finally found it: 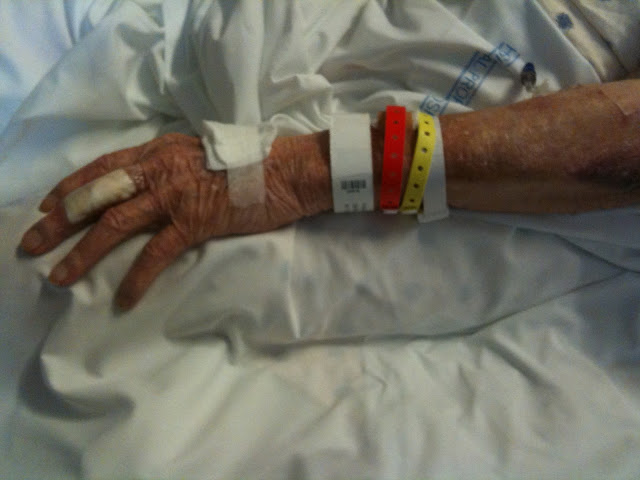