The One Thing That Connects Us All

Yes, I know I didn't write anything yesterday. Yes, I know. Holidailies has 'dailies' right in there.

At least I'm still here. Did you worry that something had happened to me?

At our age deaths of people we know come frequently. The parents' generation is pretty much exhausted. My dad had five sisters and a brother. He and four of his siblings married. (All one time, no divorces.) Of the twelve people, siblings and in-laws, only my one aunt remains. She was the youngest of all and is 86.

This year we lost a friend to complications after an accident. He was 46. He left behind a partner. We lost another friend at 85. He left behind a younger partner. The husband of a cousin of mine (she died young of breast cancer seventeen years ago) was found dead by one of his twenty-something sons recently. He was in his late 50's I'm guessing. Then we found out the son of a friend was found dead by his wife of an apparent heart attack. He was 48. Our friend lost his son's mother fifteen years ago. We visited with him and his current wife last night. It brings up the question: "Why are we still here?" Everyone dies. Why hasn't it been me? Oh, I'm still relatively young. But people my age, high school classmates, for example, are dying. I read the obituaries to see if we know anyone but also just to see how long people got and what took them (if the answer is there).

Knowing death will come is important. I worry about what I'd leave behind for FFP. What tasks I do for the family housekeeping and finances that I haven't thoroughly explained? What personal effects would lose their meaning and lurk in closets and storage and on my bedside to magnify the.grief? When I lost my parents their belongings looked so forlorn. There wasn't anything worth much but disposal was painful.

I need to plan for the time when I won't be here. It actually comforts me that I won't always be here. But I worry about not leaving things in a tidy bundle when I'm gone. I don't want to be any trouble in my inevitable disappearance. We all die. But first, we experience over and over when others pass.

In 2010, my dad left this tableau in the bathroom by his sink, went to bed, went into afib and had a stroke. I kept the watch in my car for a long time, until the battery ran down because the clock doesn't work in my car. Then I think I threw it in a donation bag. 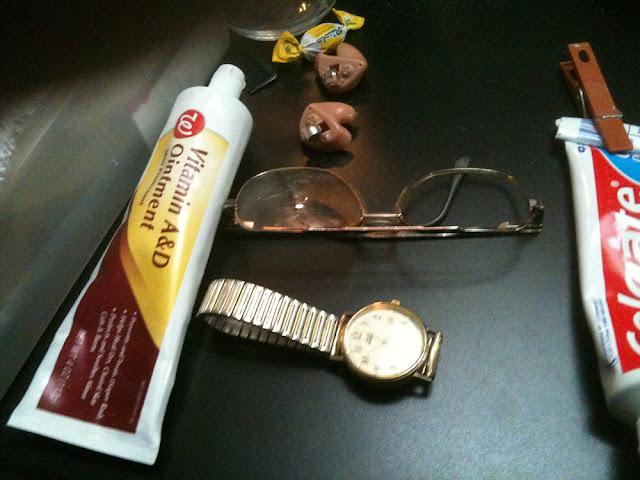