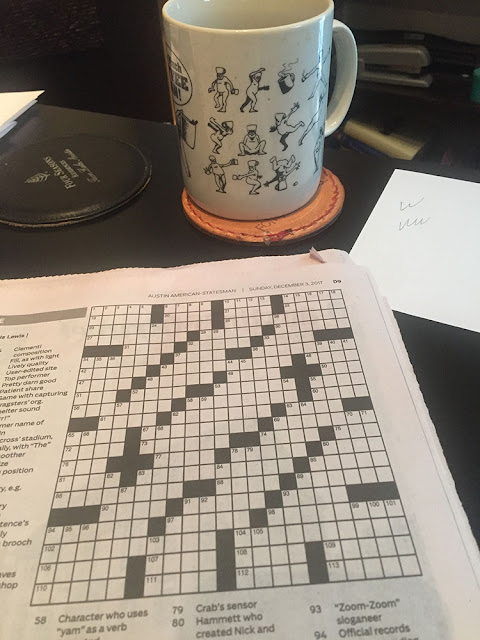 I might have mentioned that I have a couple of addictions. Opioids are a popular one now. Alcohol has been around for a while. I've never even dabbled with the former and I make sure to quit drinking every few days to see if I can. But I am addicted to puzzles. And the coffee I drink when I work them.

It's possible that I wouldn't get up in the morning except for the satisfying feeling I know will come when I get a cup of coffee and settle into my chair with a puzzle. I start each day with the ones in The New York Times. If it ended there it would be nice, but the six-days-a-week Wall Street Journal has them, too. And the local rag (The Austin-American Statesman) runs several syndicated ones perhaps because it's the only reason some people take the papers these days. I mostly work crosswords, but also Ken-Ken (I like the way the little logic puzzles unfold in Ken-Ken.) The NYT only runs Ken-Ken and a crossword except on Sunday when there are others that I don't touch in the magazine as well.

I occasionally do a Sudoku but really there isn't as much fun logic and they are just sort of a slog. I fall into a Jumble here and there but anagrams aren't a strong suit of mine and the puns are such groaners. There is a scene in that movie About Schmidt where, after Schmidt retires he is working a Jumble. There may be some line about trying to answer the pun before unscrambling any of the clues. Or maybe I read that somewhere else. Makes me laugh anyway because I never fooled with those until I retired which I did the year that movie came out.

It's hard for me to toss the papers until I've made some attempt at the puzzles I like. When the paper piles are really threatening safety around here, I'll cut the puzzles out and put them in a folder I'll never look at again to get myself to throw the rest of the paper away. Sometimes, though rarely, I'll take a few of these along on a trip with a long plane ride.

On Sunday our local paper runs an LA Times puzzle. I like this one. (And the answer is in the same section so minor cheats are readily available.)  I sank into this one today just to try to analyze my addiction. What is it about puzzles? Why can't I quit them?

I enjoy completing them. As seen below I make a few missteps. (I cheated a bit in frustration, too.) I scratched over a few letters entered in error. But. I feel a little satisfaction from finishing, seeing it completed, getting the punny theme. And, often, I learn a new word. In this one: agouti (any of several short-haired, rabbitlike rodents of the genus Dasyprota, of South and Central America and the West Indies, destructive of sugar cane. This was just clued as 'rabbitlike rodent.' Yesterday in a puzzle I learned the word idioglossia. It means the private speech of a child or children in close contact such as twins. (As it was clued.) It can also mean a condition of garbled speech. Just as agouti can also mean a bar pattern on the fur of certain rodents. I feel like if I learn a word or fact every day that I'll stay alive or something. I know the puzzles aren't truly productive, that it's unlikely I'll need these words or be able to recall them if I do. I want to cure this addiction. But first, I guess, I must admit that I'm powerless when I see a grid. 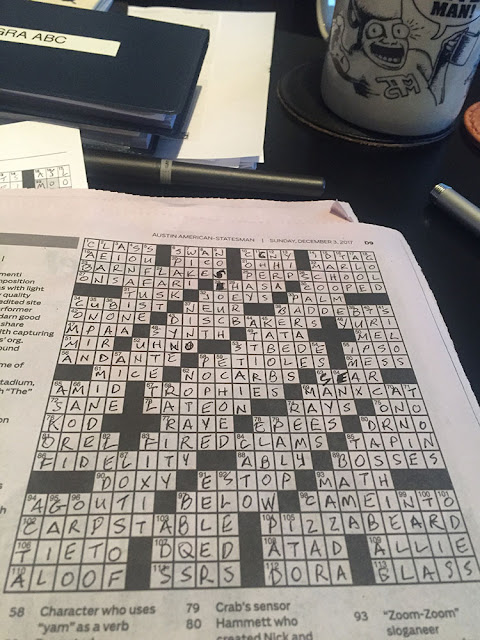 I'm a crossword junkie too - I only get the NYT on Sunday, so I have to wait for my fix, alas!

You have the same taste as I do: coffee with the morning paper and its NYT crossword puzzle. I also try to figure out the Jumble answer without working it.

My mother used to be a crossword puzzle addict too. It's one of the sad things about her Alzheimers, that she can't do them any more. I'm too impatient.