Over the weekend, we stayed two nights at the Austin Four Seasons. It's about ten blocks away. It's an interesting thing to do and we had one free night (charity auction) and another at a reasonable price. It's instructive to get away from the normal view of things and to see just how expensive things are. We watched some old movies and one of them was "The Lost Weekend." It kindled something I've been thinking about lately and that is addiction.

First, let's just say that I'm not an alcoholic. Now a perusal of my facebook page might lead one to believe otherwise as I have a habit of putting pictures of food and drink there, particularly Manhattan cocktails. But I don't wake up in the morning craving a drink. In fact, although I may sometimes say at 5 p.m. "I need a drink," that 'need' is more social and metaphorical than a draw of addiction. Seeing drinking doesn't trigger anything and I easily stop. (There is a scene in "The Lost Weekend" where the Ray Milland character sees a drinking scene at the opera and is overcome with the desire to drink. It's "Traviata" maybe?)

Which is not to say I'm not addicted to anything at all. I think we all have addictions. It might be drugs or alcohol or some classic thing like that. But, if not, there is something in everyone's life where resistance seems futile.

I'll talk about three things for me. I've indulged two already this morning and will no doubt dip into the third soon.

The idea of my first cuppa is one thing that gets me up in the morning. Two or three cups later or maybe a cup of iced coffee taken to tennis and the desire is more or less satisfied until next morning.

This machine is one of my prized possessions. It is the third one I've owned (the first two were a bit more massive). It grinds, tamps and pressure-brews each cup. It was expensive but it's so worth it. I've probably made hundreds of cups with this one. 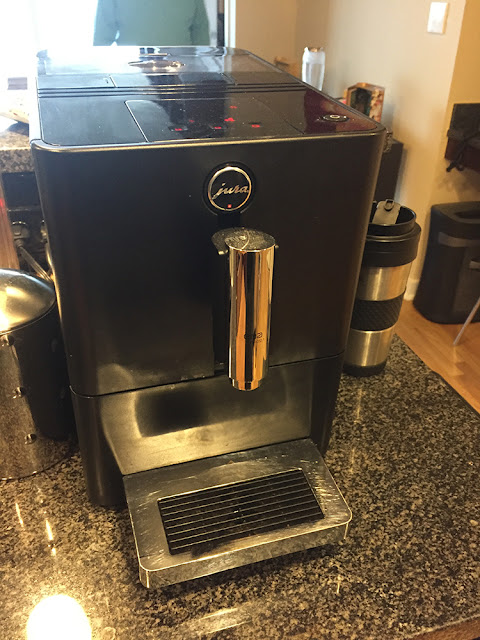 Another thing that makes me rise in the morning is my daily newspapers and, I'll admit it, even more the prospect of doing the puzzles. I like the Ken-Ken, too, but crosswords really call out to me. I worked one this morning before we left the hotel (accompanying the activity with a cup of coffee I got from the downstairs coffee bar).It wasn't the one below...this is just an example I found in my picture file. 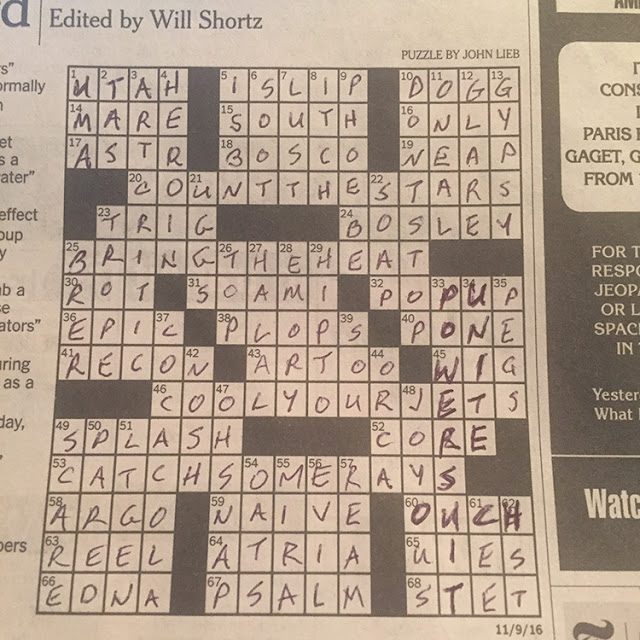 So, yeah, I find the puzzles irresistible. The empty squares make me ache to fill them in.

I like to say that I would consistently weigh 20 pounds less if I didn't eat cheese. I don't know if that's really true but hardly a day goes by that I don't consume some. Either on a salad, in a sandwich, with crackers or just a bite by itself. Or maybe queso or cheese enchiladas. If fact, the husband just asked if I'd like chicken chili for lunch. My immediate thought was, "yeah, with a bunch of cheese on top."

So, addictions. We all have some. Some people are addicted to exercise, I hear. I could use some of that.
Posted by LB at 11:39 AM