I think most of the people in my generation (Baby Boomers) spent a large part of the autumns of their childhood finding things in a 'Wish Book' for their Christmas list. This magic book usually came from Sears in our household, but I think Montgomery Wards and J.C. Penney and others probably got into the game, too.

I ripped this picture off from eBay where these vintage catalogs go for lots of money these days. No doubt they are valuable references for set designers, toy and kitsch collectors and costume designers. 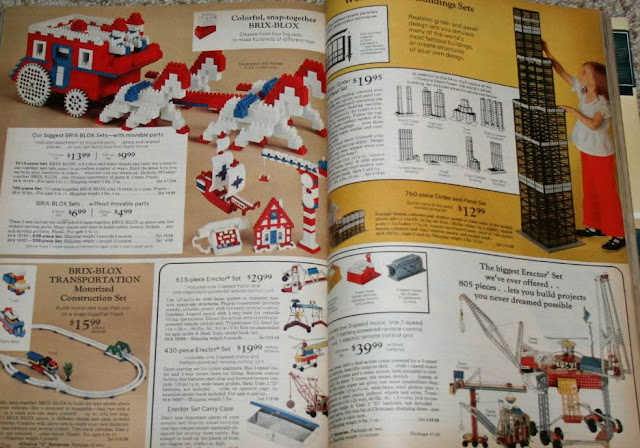 This one dates from a bit after my childhood, but note the fun construction stuff in this spread. The Erector Set picture at the top of this entry, though, is a snap of one in this very apartment and I received it when I was nine or ten years old, in the late fifties. I keep it as a reminder of the struggle to get toys that I wanted, Not only were they sometimes outside the limits of the family budget but they were also very specifically branded for boys. (See the cover art above.) I think it's nice that the spread from the catalog shows a girl building a skyscraper. This was from the '70's, though, and my time had passed. Of course, when I had some money and was grown, I bought and collected toys like Lego Sets and all manner of fun stuff for a while. Just a pent-up demand to have what was so hard to come by when it was age appropriate, I guess. The great downsizing of 2007-2008 eliminated most of this stuff although a few things like the Erector Set and several hundred bendable poseable figures survived.

This year, I've made a reverse wish list. On this list are things people usually wish for at Christmas. Instead of wishing for them, I have cataloged things I own already obviating the need for more.


So none of the above. Give a gift to charity if you must remember me.

Yep. And there are many other things that I don't need. That are unlisted. In compiling this, though, I realize that I've identified at least five doven things I own. (Lots of socks.) Out of the, what, 10,000?