Christmas is a Day of Rest 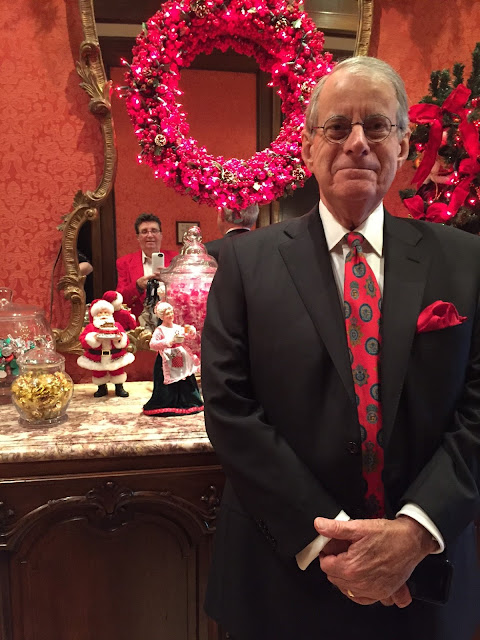 I missed writing anything yesterday. I was going to scoop up goofy pictures from facebook and put them here. Today will be a day of rest from many things. The picture was taken Friday of the long-suffereing husband (FFP) at Austin's Headliners club. They have a party on December 23 every year. It's from 11-2. I had several Bloody Marys. That's me in the mirror, post eating and drinking. We didn't do anything much after the party. Before the party we walked over to the bookstore (our local independent, BookPeople which is about a half mile away) and got a book we'd ordered. (Because we don't have enough books.) I think, after drinking in the middle of the day, I was pretty well finished. We read and watched movies.

Our Christmas Eve was jam-packed because we made it so. We went to the Armadillo Christmas Bazaar and heard a set from a band we like (Albert and Gage) and then we had an enchilada lunch at El Alma. It was a balmy day so we walked across the river to do this and, after lunch, walked up Doug Sahm Hill and through the dog park to say 'hi' to Stevie Ray Vaughn.

We read until time for our early reservation at Fixe. We had biscuits, steak tartare, pork roast,and barbecued beans. The roast was enough for six people (or more), but we knew going in that we were going to take a lot home. (If I ever get hungry again, it will be breakfast or lunch.) We had a bit to drink. A cocktail, some wine. We bumped into someone we knew who was alone at the bar and the three of us dined and dished.

It was still early when we packed it up. Fixe is a block from our apartment. We sat down and read a bit and were dozing, but, yes, we roused ourselves and went out again! We walked the five blocks to the Elephant Room and met up with our friends Butch and Linda. I drank a Guinness. FFP was down to diet Coke at that point. We lasted a set and Butch sat in for the final number and it was all we could do. The late show at the Elephant usually goes to 1:30 a.m.

By midnight, I was reading David Foster Wallace's "String Theory" (a collection of heavily foot-noted essays about tennis) in my bed. I fell asleep a few times squinting over the footnotes. And sleep.

Today is Christmas. And Sunday. I plan to publish this without editing and curl up in my chair with The New York Times magazine puzzles and CBS Sunday Morning. Maybe at the end of the day I'll write about my Christmas Day. I bet I don't get out as much as I did yesterday!
Posted by LB at 8:26 AM