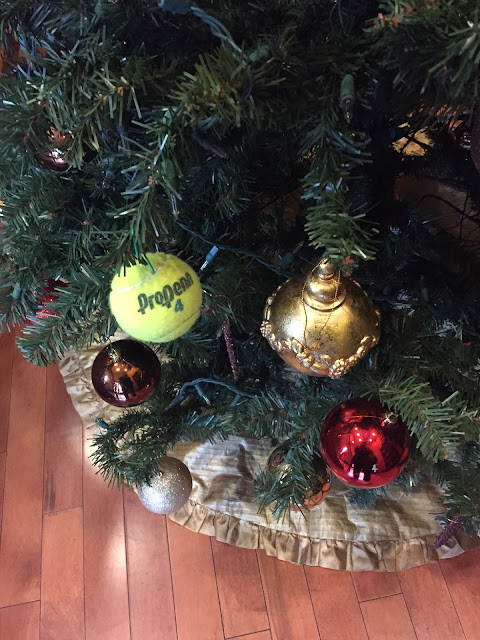 I've been playing tennis for about 45 years. When I was a kid, we had some old rackets and balls around but I didn't have access to a tennis court. I think my sister and mother both took tennis as P.E. in college. I couldn't get into tennis for PE in college and ended up with such delights as field hockey.

Right after college I was commuting to a job with a friend and we found a backboard at our old college and he showed me how to hit a forehand and a backhand. I played around from there, graduating to playing on city courts. I happened to live for a while in a cheap apartment in an expensive neighborhood. (It was right next to some railroad tracks.) This was Highland Park in Dallas. I met an older gentleman at a bar drinking with some folks from my work. He was wearing a warm-up. I casually asked if he played. Turned out he did play, enjoyed playing with women who couldn't beat him too badly and he and his wife lived in University Park. These two cities, surrounded by Dallas, had some fantastic public tennis courts. For residents only. I became good friends with him and his wife and we'd take turns getting reservations at fantastic courts. Seriously, these looked like private tennis courts on million dollar estates.

I didn't have lessons and wasn't very good, but I fell hard for tennis. When I moved to Austin, I rented an apartment at first that had courts. Someone I worked with introduced me to someone to play with. When I married Forrest and moved out of that apartment into his house, I continued to play at city parks and tennis centers. I played on and organized teams through the city. Some of these courts were nice enough, others not so much. I eventually quit playing on teams but continued to have casual games, before or after work.

I love tennis. When I finally got a color TV so I could see the ball, I loved watching it. I got a brief visit to Wimbledon in the '80s and saw a professional tournament in the '70s in Dallas a few times. My relatives started giving me tennis things: knickknacks, calendars. One time my mother, in a coup of gift giving, gave me a practice ball carrier. That was really handy to go practice serves when I didn't have anyone to play with.

In the '80s we joined a private club in a downtown office building with racquetball and a gym. I took up racquetball. I still played tennis, though.

In 2000 the club with racquetball closed and we were not going to have a gym to go to. There was a private tennis club about three miles from us. Nice gym and 18 tennis courts. No golf. We decided to join, got three letters of recommendation in a day and paid our money. I was still working, but I'd go to a few events they organized, bring friends there as guests to play. When I retired in 2002, I met a lady at a casual event who asked me to sub in her casual doubles game. This woman, 14 years later, is still playing. She is going to be 86 next month. Three times a week we play with an assortment of other players, weather permitting.

Tennis is one thing that persists through a lot of changes. I wrote recently about games and their roles in our lives. The picture shown on that entry is of my current tennis bag. Yesterday I surveyed the contents of that bag. (Today's picture is a detail of the Christmas tree in our club's pro shop.)

In that bag I have: two tennis rackets (I use one of them, which is probably 25 years old with several regripping and stringings, most of the time.) Inside the bag are band-aids; two knee braces (I'm not currently wearing either one); an arm band to stave off the tendonitis that is tennis elbow (not currently using), Two pairs of glasses with attached sun protectors and the magnetic sun protectors from my current prescription glasses; three terry headbands (I never wear these any more, relying on my hat to catch sweat); two new cans of balls; three towels (these belong to the club and I recycle them through their laundry service); a 2007 The New Yorker magazine; a out-of-date bottle of Ibuprofen with a few pills left; one dose of Benadryl; and some sunscreen. Yeah, we all carry around a lot of 'stuff,' huh? The good news is that I gave away the metal practice ball carrier. The club will loan you one of these if you need it so my mom's wonderful gift has moved on to some thrift store shopper. Tennis. Stuff. Two of my favorite subjects when I have committed to write something!
Posted by LB at 9:02 AM