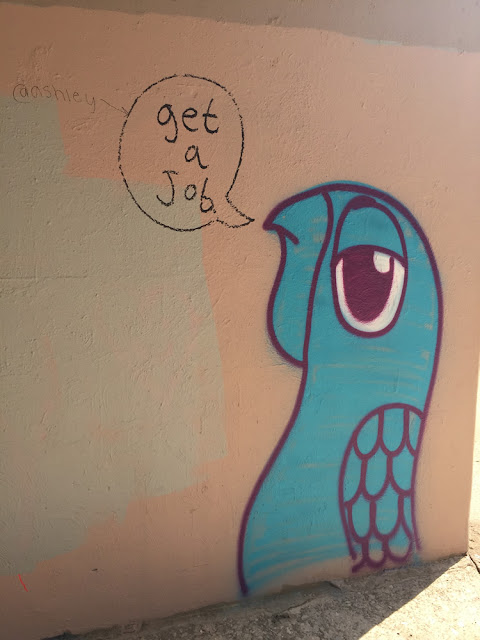 Unsure what to write about today. So I looked through the raw images of pictures I took this month and decided to use this one. Given the caption, I picked a favorite topic: retirement.

It has been over fourteen years since I worked.That amazes me. Not that it seems like just yesterday that I had a job, but that I have really not accomplished many of the goals I had.

To quote a blog entry from almost seven years ago (so half way into the journey):

I saw myself getting everything in my (old) house organized and working to a fault. I saw myself fit and active and achieving things, doing things for others. I thought my financial life would be organized and I'd have learned lots of new things. Of course, there were those books that I was going to write and entertaining and informative WEB sites that I was going to design.
I don't know when the vision shifted to downtown living. When I retired in 2002, downsizing was on my mind but the idea of living in 1200 square feet or so was not really something I'd considered.

So I spent a lot of time from my retirement in 2002 to 2009, not so much getting organized or learning things or being creative but, let's see, remodeling the house one last time before we would leave it. And then, around 2007, seriously downsizing to move downtown.

Something else that was on my mind early on was travel. Unconstrained by counting vacation days, how hard could it be? Turns out there are constraints. As I said back in 2009:

FFP was still working full time running his agency and wasn't ready to do much traveling. However, not too many weeks after I retired I was off to Colorado with my dad and then off to Berlin. Dad was doing better then. He could travel, drive even. My in-laws had quit driving but could still walk around the neighborhood and take cabs to go places. Intellectually I knew that they would become more feeble and have more needs.

So, yeah, I got away a bit right after retirement (which was right after my mother's death). But in 2009, I could feel the implications of the age of my three remaining parental units we were responsible for. (My dad would have some serious health issues in 2009 and he would die in 2010 in the midst of a health scare for my husband. Both in-laws would die in 2011.)


I did get back to South Africa, had a trip to Dublin, a driving trip or two with FFP, trips to New York, two trips to France with FFP. It sounds like a lot but it's been seven years and we didn't go anywhere in the last twelve months except for a short trip to New York, a night in San Antonio and a couple of nights at Lake Austin Spa.

We do seem to reliably get to the Northwest every year. We've made more trips to New York. Been a few times to New Orleans. I don't really count all the back and forth trips to Houston to follow up on FFP's health scare. We made it to France in 2015 and Dublin and Italy in 2016. But, no, in spite of not having accomplished all the learning, organization, and creative goals, I also have not traveled enough. We keep saying we have to do it while we can still comfortably travel, but we've become more and more convinced of the need for well-planned travel with first class accommodations.

I found while stealing the past ruminations on my failed retirement that I gave George Bush advice on his retirement.

Anyway, I'm always telling people who retire that I'll advise them. But, really, I've failed at managing my own.