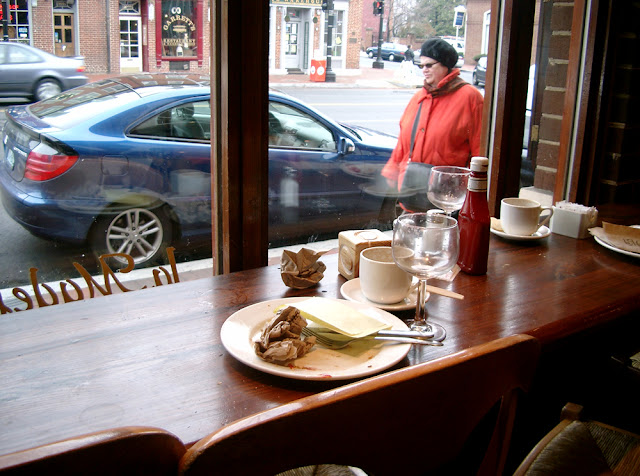 This picture was taken in January 2004 (almost 13 years ago in other words). I'm not sure why I took it. But, I did.And there it is among pictures of my tour group from Ballet Austin in Washington, D.C. for a performance of the company and other fun. So from inside a coffee shop I shot through the window, across breakfast debris (ours, someone else's?) and caught a car going by and a passing stranger. A total stranger. Isn't that an interesting phrase? Redundant perhaps.

I'm intrigued by the appearance of these people I don't know in my photos. You weren't introduced, you don't know their history. But there they are in the moment. When people you know appear in your photos, you usually know what happened to them. Maybe they have died. Or grown up. Or become infirm. In this same series of pictures is one of an Austin couple dancing in a very lively way. I see them occasionally today and they aren't capable of cutting a rug. But what happened to the lady in the red coat? I will most likely never know. I have thought of making a blog called 'total stranger.' And just putting in pictures like this where someone accidentally appeared in my viewfinder and, usually without their permission, I snapped the picture. I explored the phenomena a few years ago here. That is an even more intriguing picture.
Posted by LB at 12:30 AM