I just finished reading "All the Light We Cannot See" by Anthony Doerr. I know it's a couple of years old, but something made me include it when I ordered other 'books I don't need' from Powell's. This book was my 'before bed' reading for a few weeks. I almost always read a real book before bed and rarely take gadgets in the bedroom. Sometimes I read a magazine. Rarely a newspaper (hard to handle in bed).

This book invoked a travel quest. A lot of my travels include the ordinary things tourists do at a destination they choose because they haven't been there or want to return to, but often my trips are inspired partly by quests. After reading this book I wanted to go to Saint-Malo. I claim to have read a lot about WWII, European Theater, but I was ignorant about the story of Saint-Malo. (The city was needlessly flattened by the Allies who thought there were many more Germans holding it.) There were other locations in France and Germany, but it's really a story of Saint-Malo told with fictional characters and a bit of fantasy.

This sudden desire to go to Saint-Malo made me think "then I could probably get to Jersey (one of the Channel Islands) from there." Because another quest I have is to go to Jersey. I think some of my ancestors were from there. It looked on Google Maps like ferrys connceted the two conveniently.

Reading often triggers these travel quests. James Joyce's "Ulysses" triggered a desire to go to New York on June 16 (Bloomsday, the day on which the novel is set) and hear readings. And this last summer we went to Dublin on June 16. Ground zero for Bloomsday because the novel is set there.

The other day we were talking about going to London. (My husband has never been.) In 2005, I read an article in The New Yorker by Adam Gopnik entitled "Letter from London and Paris: Two Cooks; Taking food to the extremes." It was about Alain Passard and his Paris Restaurant Arpège and Fergus Henderson and his London restaurant St. John. Chef Passard was an advocate of more vegetables and Chef Henderson a 'nose to tail' meat aficionado. I'm happy to say that I have now been to Chef Passard's place on two different visits to Paris. 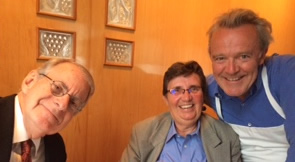 There we are with Chef Passard!
Well, if we went to London....maybe I could check out Chef Henderson, too! As luck would have it I saw a Fergus Henderson cookbook in the independent bookstore nearby just after I had this thought! I love veggies, but I love organ meats, too. A quest!

These travel with a reason (no matter how weird) deals have taken me to Berlin when Christo and Jeanne-Claude wrapped the Reichstag and to New York for their Central Park Gates and to Lake Iseo in Italy for the Floating Piers. We visited Roslyn, Washington this last summer because our favorite TV show "Northern Exposure" was filmed there. (Our friend instigated this but the fact that we carried DVDs of the show to their Oregon Coast house every visit made her think of it.) Once when my friends and I were meeting in Paris to go to the Loire, I read that there was an exhibit in Rouen of Monet paintings of the Rouen cathedral. Side trip! (Oh, Monet's Garden and Chartres are 'on the way' let's do that.) Many of our trips involve seeking out a special bookstore every time we go. (Crawford-Doyle and the Strand in NYC; Powell's in Portland, OR; and Shakespeare and Company in Paris.)

Last summer (2015) we were planning to go to the south of France when I read about a special exhibit at MOMA when we were going to New York. It was the paper patterns for a chapel he designed in Vence, France. So we went to the exhibit and, you guessed it, then we went to see the chapel when we were in France. That trip south also took us to Menton because someone we'd only 'met' online lived there. When I discovered a Michelin-starred restaurant there, guess where we had lunch?

I could go on and on. (And perhaps I will as I run out of things to write about daily.) Many trips were to tourist spots but had the advantage of meeting up with someone like this.

Have you ever traveled somewhere just to see some event or one particular landmark or eat somewhere or, um, buy books?